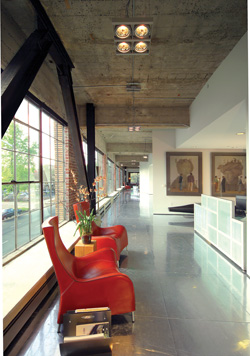 Sacramento suffers from an inferiority complex vis-à-vis its urbane neighbor to the west. While San Francisco is less than two hours away by car, it is (at least in the popular imagination) light-years ahead of Sacramento in terms of style and sophistication.

But there are intriguing hints that Sacramento is growing up. One such hint is the East End Lofts project across from Memorial Auditorium on J Street—the $8 million conversion of the old Daugherty Chevrolet building that opened last year to great acclaim.

The project is probably best-known for the two popular restaurants—P.F. Chang’s and Mikuni—that occupy its ground floor. Less well-known, yet arguably more influential in terms of Sacramento’s future, is the suite of offices that takes up the second floor. Vibrant, witty and modern, it promises to set the standard for commercial design in the capital city for years to come.

At the center of it all is Mark Friedman, a boyish-looking 47-year-old developer who worked on the East End project. A Sacramento native (his family co-owns Arden Fair mall), he wants to raise the bar for design in his hometown.

Friedman’s development company, Fulcrum Capital, occupies half of East End’s 11,000-square-foot office floor; the other half is leased to a local law firm. With the help of San Francisco’s Limn Studio (the design arm of the Limn furniture company), Friedman put his stamp on the space, which juxtaposes gritty industrialism with a refined modern aesthetic.

In the building’s heyday in the 1920s, the second floor served as an auto repair shop—something that was manifestly evident in the oil stains on the floor and the metal fasteners and bolts screwed into the walls and ceiling. To create a modern office that would pay homage to the building’s history, Friedman and Limn owner Dan Friedlander conducted something akin to an archaeological dig, stripping the place of years of buildup and layers of bright-blue paint to discover its intrinsic beauty and honesty. “Part of the art of making this work was figuring out what was worth keeping—and how to preserve it,” says Friedman.

They started with the building’s most appealing feature: its massive, metal-framed windows, which flood the interior with light. Retaining the metal sashes, they replaced the old windows with specially laminated panes of glass that eliminate much of the street noise. Then they set about trying to evenly apportion the light throughout the floor.

Friedman and Friedlander appropriated the best real estate—the frontage on 16th Street—for a public space: a reception area-cum-art gallery. They wired the building so that staffers could bring their laptops out to work in this light-filled public area. A low concrete shelf that runs along the building’s inside perimeter—part of its bracing system—provides a casual place to perch.

In traditional office design, executives typically claim the offices along the outside wall, getting more than their fair share of light, while the staff occupies the dark center. Here, a more democratic ideal prevails.

While the executive offices still are along the outer wall, they are separated from the interior workspace by ingenious glass walls that are opaque at floor level and become increasingly more translucent as they near the ceiling, transmitting light into the office core. Glass Corbusier doors that pivot rather than swing open bring even more light into the space.

Democracy also was at work in the furniture selection. Friedman chose desks made of highly burnished wenge wood for the executive offices, and equally stylish (and expensive) furnishings for the support and accounting staffs. Employees work at long glass and aluminum desks, set side by side in what Friedman calls a modern variant of a New England college library table. There’s clearly a sense that no one should have to work in a soulless, isolated cubicle.

Throughout the project, Friedman and Friedlander chose simple, pure, organic materials: leather, glass and wood for the furnishings, cork tile and terrazzo for the floors. They reserved their splashiest design statement for the reception area, where they covered the floor in 3-by-3-foot squares of shiny zinc that, over time, will scuff and mellow to a pewterlike patina.

With the help of John Natsoulas of John Natsoulas Gallery in Davis, Friedman filled the offices with art by Northern California artists such as David Hollowell, Michael Bishop and Lynn Criswell. Bishop’s “Titus,” an enormous cast-iron sculpture of a baby’s head, dominates an area that is someday destined for display of architectural models of Friedman’s projects. (The imposing sculpture will be moved to Friedman’s West Sacramento waterfront development upon completion for use as public art.) “What every office needs—a giant cast-iron baby head,” Friedman cracks. But he turns serious. “I like that it’s here—it’s unexpected.”
If Friedman has his way, in the not-too-distant future, the unexpected will become, well, expected in Sacramento’s commercial spaces.

“It’s such an amazing pleasure to work downtown,” says Friedman, who since the completion of the East End Lofts has formed a partnership called LoftWorks with his East End partners—Michael Heller, Glenn Sorensen and Walsh & Forster Inc.—to tackle similar projects. “I can’t believe this is the Sacramento I grew up in. I didn’t think it was possible, but urban sophistication is finally coming to Sacramento.”