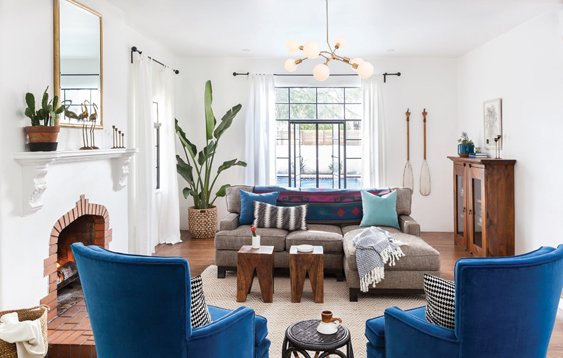 Kele and Christina Dobrinski spent years living in San Francisco, but it took only a few days for them to decide to ditch the bidding wars of Oakland and buy in Sacramento instead. Originally vetted by Kele’s remodel role-model parents, the Spanishstyle home got the couple’s wheels turning immediately—and before week’s end, the deal was all but done. But that was just the beginning, as the 1930s home needed a complete overhaul. The hefty and lengthy undertaking was not ideal for a family of four living in a small two-bedroom SF apartment. But it was a dream project for a duo with an undeniable knack for design and a willing crew of contractor relatives.

For the next 18 months, Kele, a creative who works in design for the tech and hospitality industries, and Christina, a public relations professional, overhauled the home with expert help from Kele’s father, uncles, cousin and family friends. “It was totally overgrown and bland when we bought it,” says Christina. “But it had amazing bones, and we knew we could turn it into something modern and fresh for our young family.” To preserve the home’s architectural charm, they restored many original features, including the fl oors, fi replace, exposed brick walls and a mission-style bell atop the home’s front exterior. Then, to make it defi nitively theirs, the Dobrinskis added a master suite, put in a swimming pool and converted a dilapidated brick structure in the backyard into a pizza oven.

Now, a year after moving in, Kele and Christina have their sights set on their next project: opening a thoughtfully designed, highly social and kid-friendly swim club in the city they now call home. Dining room features original exposed rick and beamed ceiling. “My dad and I agreed we should keep the old redwood beams because it’s a material you don’t see very much of anymore,” says Kele. “So we sanded them down and restored their original beauty.” Formerly a sunroom, the master bath welcomes an abundance of natural light. Leaded glass was pulled from the house’s original cabinetry and repurposed for the kitchen. Original iron banister.
Wood lintels came from the junkyard and were once part of a schoolyard fence.