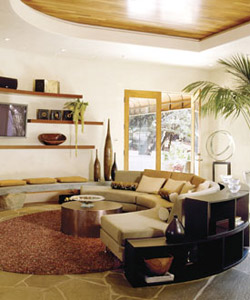 Who needs straight lines when you’re building your dream house? Not this Carmichael couple.

After years of working and raising families, newlyweds Gary and Marcia Beutler were looking forward to the next phase of their lives: retirement.

But first, they needed a home for their new life together. So they purchased a sylvan five-acre lot in Carmichael and set out to create a cozy yet contemporary nest.

The result? The kind of house you build when you have nothing to prove and no one to please but yourself.

“We wanted the house to be comfortable, not fussy,” explains Marcia, a retired schoolteacher.
“Like a vacation property,” chimes in Gary, a semiretired business owner.

The couple had some pretty definite ideas: They wanted a modern house with an easy-breezy California feel, and they hoped to capitalize on the property’s gently rolling topography and spectacular views.

They also wanted Architecture with a capital A. So they hired local architect Doron Dreksler with Packowski Heinritz Associates, who designed a two-story, 5,000-square-foot structure with almost no straight lines. Instead, the house consists of a series of curving walls and oval-shaped rooms.
Then they recruited interior designer Bruce Benning to give the interiors some additional architectural oomph. His biggest challenge? Dealing with the home’s lack of linearity. “It was interior design in the round,” Benning explains. “Not an easy thing to do.”

The house has two distinct personalities: the “public” first floor, built for entertaining, and the decidedly private second floor, devoted entirely to a resortlike master suite. Connecting the two: a sweeping staircase with curved glass panels and custom-designed ironwork.

On the ground floor, entertaining spaces spill into each other: from the spacious, art-filled entry to the oval dining room and on to the compact kitchen and the curvilinear living room with French doors that open onto a large, covered patio. Benning took advantage of the home’s unusual lines by using curved shelves and a curved concrete bench in the living room, curved cabinets in the kitchen. For the dining room, he designed a glass-topped oval table large enough to seat 12.

The couple decided small was the way to go in the kitchen. “When we cook, it’s for only six or eight people,” Gary explains. “More than that and we hire caterers.” So they went with underscale, high-end appliances and, instead of the standard SUV-sized island, a diminutive egg-shaped prep island made of stainless steel topped half with limestone, half with butcher block. Built-in cabinetry gives the room the shipshape look of a yacht’s galley: Made of an exotic hardwood called anigre, the lower cabinets are simple and clean-lined, and open shelves take the place of upper cabinets. “Upper cabinets would have seemed too intrusive,” says Marcia.

While guests have the run of the ground floor (which has an entire wing devoted to guest bedrooms), upstairs it’s a different story. There, the couple created their own version of a five-star hotel suite, complete with a library/home theater, exercise room and bedroom, plus a laundry room and spalike bath. Amenities include a built-in espresso machine and a TV hidden behind a bathroom mirror.
Building the house was a complex, two-year project—one the Beutlers embraced with gusto. During construction, they lived in a small guesthouse on the property, enabling them to act as unofficial on-site project managers. Every evening, they’d wander over with a glass of wine to see how the house was coming along. “We had our fingers in everything,” says Marcia.

That level of involvement can be a recipe for disaster—just ask any designer who’s had to deal with an overbearing client. Not so with the Beutlers, says Benning. “They were just so good with the process,” he says. “They didn’t obsess or get frustrated when problems came up. I thought more than once, ‘This is as good as it gets.’”

The designer and the homeowners ended up becoming fast friends. During construction, says Benning, “we would walk down to a pond that Gary built on the property, dangle our feet over the bridge and throw food to the fish. It was a little piece of heaven.”