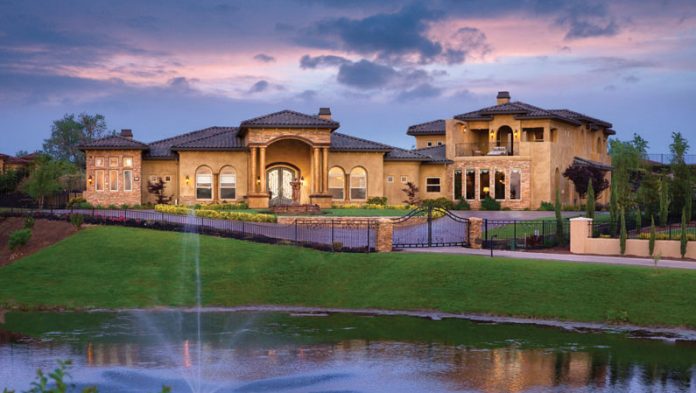 Continuity. That’s what Roger and Jonna Ward wanted in their new Granite Bay home. “I said, ‘When you go through this house, it will flow,’” Roger explains. “Everything will move together, and we will change the rooms via what is in them. We are not going to do color explosions and mix everything.”

What else wasn’t going to fly? The “modern look.” “In the first house we built, we’d done that,” Roger says. “It was done well, but we wanted something more formal, more traditional.”

Enter interior designer Lisa Smith of Julie Smith & Associates, also of Granite Bay. “We formed a connection pretty early on in the project, and I knew if Roger didn’t like something, he wouldn’t spare my feelings,” she says, laughing.

But how do you achieve continuity without monotony? Smith’s approach was simple: Treat the Wards’ home as if it were her own. “They put a lot of trust in me,” she says.

But you won’t find a pouf, flounce, loop or festoon anywhere. “I’d much rather have bold elements instead of busy, busy swags and ornaments,” Smith says. The Wards agreed. Bold, solid, formal and comfortable became watchwords. “We chose every piece of furniture together,” Roger says, with Smith chiming in: “And we kept the Marge Carson book out.” In high-end furnishings circles, Marge Carson, a Southern California-based company, is known for its voluptuous interpretations of classic designs and its solid fabrication. “You could say I went Marge Carson crazy,” Roger says. “There’s not a frail piece of furniture that Marge Carson makes, so you’ll find a lot of Marge Carson in this house.”

One exception is the loggia, within skipping distance of the home’s 85-foot-long pool. “We spend as much time here as anywhere,” Roger says. “We watch television out here, and eat and swim and drink and entertain, and we literally go from the pool to the couch.” A sectional, designed and built in the Julie Smith & Associates workshop, was spec’d to Roger’s 6-foot-3-inch height and is covered in an outdoor chenille so you can flop down on it even in your soggy bathing suit. It’s not Marge Carson, but it looks like you could slide it into the living room anyway.

Smith began orchestrating the Wards’ interior as soon as the Sheetrock was up, so she called in decorative artists Theresa and David Fike of Fike Studio in Folsom to work their magic on the walls and ceilings. The two, mother and son as well as business partners, are best known for their one-of-a-kind glazes, crackles, washes, varnishes and plaster finishes. “Every house we do, we develop things that have never been done before,” Theresa says. “Lisa told us to come up with treatments that would knock their socks off, so we had sample boards flying back and forth. Roger knows what he likes when he sees it, and he was very involved with this project.”

In fact, Smith says that one of her favorite stories about this pro-ject was the day Roger showed up, power tools in hand, and asked Smith and Theresa to tell him why he couldn’t use his drill to distress the walls in the master bedroom. Why paint cracks if he could just drill them in? “We said, ‘Go for it,’” Smith remembers. “He did, and it looks great.”