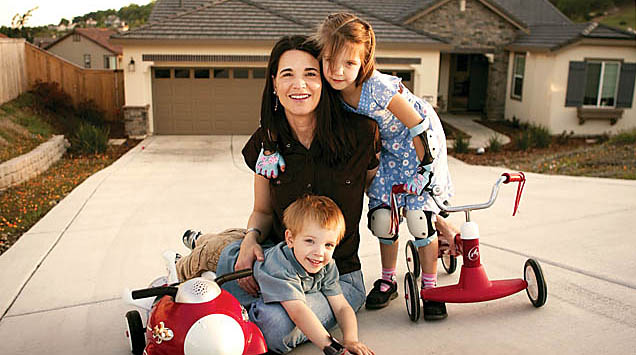 Jennifer Gentry studied the housing market for nearly two years before buying her dream home in El Dorado Hills. Finally, it’s a buyer’s market. After years of run-ups, home prices have come down to earth. Mortgage rates are at historic lows. Foreclosed properties are a dime a dozen. The federal government is offering incentives for first-time homebuyers. Why now’s the time to jump into the real estate market.

Chris Wilhelm lived with his mom in Roseville well into his late 20s—and withstood years of razzing from his buddies because of it. He scrimped and saved. He watched the real estate market closely. And he winced when his friends bought up the road in Lincoln, spending more than Wilhelm thought they should and adding extra Highway 65 hassles to their commutes.

But when the news media began reporting on the drop in home prices, Wilhelm could no longer resist the pull. “That’s when I applied for a loan,” says the 29-year-old California Department of Social Services analyst. “In this day and age, with the economy the way it is . . . there were a tremendous amount of homes.”

Wilhelm snagged himself a winner. In October, he moved into his own $225,000 three-bedroom home in an established east Roseville neighborhood, paying less than the past two times the house on Sierra Gardens Drive changed hands. His friends still tease him about being a late bloomer, but Wilhelm suspects they’re just jealous. “I didn’t jump when people said ‘jump,’” he says.

Real estate agents perpetually have said that now is the time to buy. But maybe now it’s really true. With free-falling prices, inter-est rates near record lows (about 4.8 percent in April on 30-year mortgages) and new-homebuyer tax credits on the books, the conditions look sunny.
“Now is a great time to buy. It really is,” says Kurt Parkinson, a Sacramento real estate agent with Coldwell Banker. “There’s just unprecedented opportunity.”

Patience is now paying off, not just for Wilhelm but for scores of other buyers, says Tim Collom, a local real estate agent with Windermere Dunnigan. “The buyers that I’ve seen who are really taking advantage are those who’ve watched the market closely, really sat on the sidelines and realize that right now is a really good time,” he says.

First-time buyers are particularly well-positioned, says Collom. The Federal Housing Administration is tying some loans to down payments of just 3.5 percent. The federal economic stimulus package includes an $8,000 tax credit for qualified first-time buyers in 2009. Unlike its earlier incarnation, this credit does not have to be paid back.

The inventory of for-sale homes is especially robust, thanks in no small part to the unprecedented number of residential foreclosures. In fact, nearly 40 percent of the homes sold in the Sacramento area this past year were bank-owned—more than triple the number from the previous five years, according to Zillow.com, the online real estate service.

An uptick in home sales is taking place in part in the newer, more affordable neighborhoods, where prices were artificially pumped up during the housing boom, such as Elk Grove and Natomas, says MDA DataQuick’s LePage.

And an increasing number of buyers are using a specialty tool all but unheard of a year or two ago: the short sale, which means that the bank agrees to forgive part of a mortgage if the property sells for less than what is owed on it.

If you’re a buyer, you can snap up a real bargain via a short sale. But it takes patience and nerves of steel. “The truth is that short sales are the grandfather clock of real estate,” says real estate agent Barb Lebrecht of HomeBuyers Assistance in Gold River. “The more moving parts something has, the more likely it is to break.”

Lebrecht helped Wilhelm with his short-sale purchase. Negotiations with the bank fell through on several properties, and the process took longer than Wilhelm liked before he finally was handed the keys. Still, he got such a good deal, he says, that he has been able to put some of his savings toward home improvements.

“Now I have a home I can live in long term,” Wilhelm says. “And with me not maxing out my loan, we were able to have the drapes. We were able to put up the track lights and go to Kelly-Moore and pick out whatever paints we wanted.”

For existing homeowners seeking more spacious digs, the move-up market also is showing some signs of recovery after several fairly dormant months. “We weren’t seeing that before because [sellers] weren’t able to get out of their houses,” Parkinson says. “They are selling their homes for less but are finding the homes they want to buy are also selling for significantly less.”

How long this buyer’s boom will last, unfortunately, is not something anyone can say for sure. “It’s one of the most frequent questions I get,” Collom says. “I’d have to use a crystal ball.”

• Do your (cyber) homework. Learn about comparable sales and other real estate news in your target neighborhoods by visiting websites such as Zillow.com, Trulia.com and Realtor.com.

• Think conservatively. Have you put aside 10 percent to 20 percent for a down payment? Will you be able to keep up with repairs and maintenance, property taxes, utilities and other homeowner expenses?

• Determine how long you plan to stay put. Because of costs associated with selling, it rarely pays to plan to move within a few years of your purchase.

• Maintain good and demonstrable credit. “We used to have ‘stated income’ loans, where you didn’t have to have the proof. Now you have to have the paycheck stubs, credit scores, bank statements,” says real estate agent Diana Russell of Sacramento Land & Home.

• Prequalify for financing before you start house hunting.

• Work with a buyer’s agent. If you are interested in buying a short sale, find a short-sale specialist who can negotiate the multitude of technicalities.

• Learn to negotiate effectively. Your local library or bookseller can lead you to any number of easy-reading titles on negotiating skills.

• Plan wisely if purchasing a foreclosed home. Take into account the cost of necessary repairs. Hire an inspector.

• Recognize that you are buying a home, not making an investment. “People should be looking at whether they can afford a home over the long term,” says Average Buyer blogger Jennifer Gentry. “We were looking at a house as a home, not as an alternative to renting, not to make money off of it. We plan to be here for a long time.”

SHE BLOGGED, THEN BOUGHT

When aviation industry analyst Jennifer Gentry and her husband moved to the Sacramento area in 2006, they planned to use the profit from the sale of their Washington, D.C., town house as a down payment on a house for themselves and their two young children. For nearly two years, Gentry studied housing market trends, researched the local inventory and meticulously logged every turn in the road on her Average Buyer blog.

Finally, in early 2009, the new El Dorado Hills home she and her husband had been tracking fell out of escrow. They offered 5 percent less than the asking price and were in their home by February. They even snared an interest rate of 4.625 percent, “which now gives us a larger chunk of change to spend on the backyard,” Gentry notes.

Since the move, Gentry has continued with her prolific blogging. Check out her blog at averagebuyer.blogspot.com, as well as the solid list of local and national real estate links she posts.

It’s one of the best deals in town: a fully remodeled six-bedroom, two-story home with lots of storage, top-of-the-line appliances and a party-perfect backyard.

The listing price hovers at just above $1 million. Had 1225 Macaulay Circle gone on the market a few years back, the Carmichael home would’ve fetched at least a couple hundred thousand dollars more.
The 4,150-square-foot house is five blocks from the American River and is close to both Jesuit and Rio Americano high schools. It boasts a new cedar shingle exterior and a new 50-year roof, a renovated kitchen replete with Dacor and Bosch appliances, plus a pool, covered patio and poolroom.

“We’ve loved living on Macaulay Circle,” says Rebecca Janicki, who purchased the home with her husband, Bill, in 2001. “The neighbors are wonderful. There is such a strong sense of community where everyone truly looks out and cares for one another.”

The Janickis and their three school-age children moved to San Diego this past summer because of Bill’s job as an aviation attorney. Rebecca, a licensed real estate agent, takes the drop in home values in stride.

“As we saw home prices escalate, we knew it was an artificially inflated market at unsustainable prices,” she says. “We are now glad to see prices and interest rates that are far more affordable for families.”
See the house for yourself at 1225macaulaycircle.com.