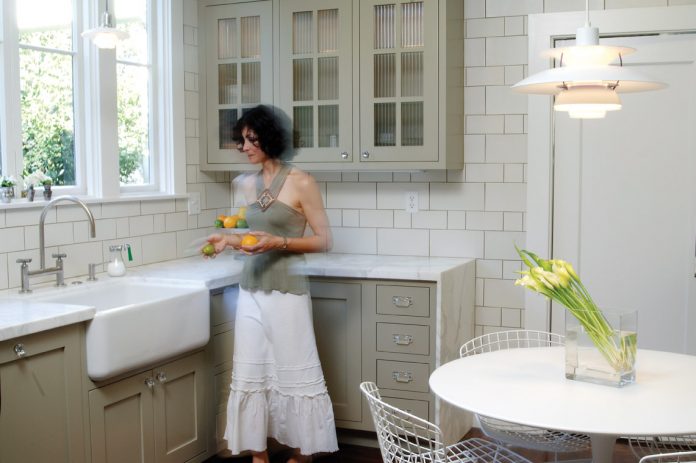 A Fab Forties kitchen gets a sweet makeover.

Susan Bitar loves to bake. But the cramped kitchen of her 1920s-era house in Sacramento’s Fabulous Forties was hardly a baker’s dream.

There was almost no counter space and little room for appliances, says Bitar, a self-employed public relations executive and single mom of two. It was very dysfunctional.

To the rescue: Curtis Popp, a local designer known for his modern sensibility. Popp set out to create a kitchen that would really cook.

The first order of business was to solve the structural problems plaguing the small space. The kitchen had a bad floor plan, he explains. It was too tight.

Bitar had one requirement: She didn’t want to expand the house beyond its existing footprint. That ruled out a host of easy fixes.

So Popp got out his sketchbook and started drawing. Eighteen sketches later, he hit upon a solution. By removing a wall and eliminating a narrow hallway, he could open up the space and create a more gracious transition between the kitchen and adjoining family room. That also allowed him to reconfigure the room for deeper cabinets, wider countertops and better appliance placement.

The old refrigerator, for instance, had been stashed in the hallway, along with a washer and dryer. When I was pregnant, recalls Bitar, I could barely squeeze through. The new design allowed Bitar to move the refrigerator into the kitchen where it belonged. (The washer and dryer were moved upstairs, near the bedrooms.)

It also enabled him to create a baking center near the range, with cabinets roomy enough to store pans and other supplies, a marble countertop for rolling out dough and open shelves to keep flour and sugar easily at hand.

Once the space issue was resolved, Popp and Bitar moved on to the fun stuff: the kitchen’s look. While Bitar wanted to respect the house’s architecture, she also craved a space with style&emdash;no cookie-cutter kitchen for her.

She and Popp came up with a design that’s reminiscent of a 1920s kitchen. But, with its cheeky modern references, this is decidedly not your great-grandmother’s kitchen. For example, instead of a backsplash of classic 3-by-6-inch subway tile, Bitar chose dramatically oversized tiles in three different sizes (4-by-4, 4-by-8 and 6-by-12) and used them to cover the walls from floor to ceiling.

The Craftsman-inspired cabinets (made by Heartland Custom Cabinets of Sacramento) are painted a muted putty-gray and sport old-fashioned bin pulls made of clear glass, not run-of-the-mill nickel. (Bitar searched high and low before stumbling across the pulls, from Crown City Hardware in Pasadena, on the Internet.) For the countertops, Popp recommended honed Calacatta marble rather than the more common Carrara stone. And to give the cabinets a more finished appearance, he waterfalled the marble, having it cascade from the countertop down the cabinet’s side to the floor. It made the fabricator nervous, he explains, but it looks terrific.

In this kitchen, new and old co-exist happily. The deep farmhouse sink is a vintage style from Shaws Original, an English company that’s been around since 1897, while the brushed-platinum faucet comes from Dornbracht, known for its high-quality modern fixtures. And the spun-aluminum lighting pendants only look contemporary&emdash;they’re actually a 1920s design by famed Danish lighting designer Poul Henningsen.

So she replaced the outdated aluminum windows with wood windows and replicated the deep moldings found throughout the house. Then, she furnished the room with a contemporary sectional sofa from Gus Design Group and a 1950s coffee table that she found on eBay. In a nod to the room’s past, Popp convinced her to cover one wall with a classic pop art-inspired wallpaper from the ’60s called Alphabet.

Bitar loves her new kitchen and family room. And now, she has everything she needs to bake up a storm.