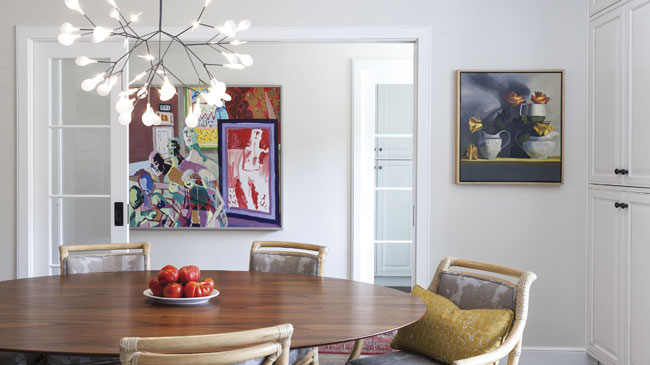 Good Bones. That’s what Randy Reynoso and Martin Camsey saw when they first stepped foot inside the stately but neglected Monterey Colonial that they purchased in 2010. “We saw it independently for the first time and we both loved it when we came in,” says Camsey. Adds Reynoso, “There was just something about it. I fell in love with these spacious rooms.” Popp, who along with partner Dustin Littrell has a reputation for designing with a modern aesthetic, jumped at the chance to prove their chops in a traditional space. “It came at a good time for us because we were able to do something different,” says Popp. “We’d been labeled modern, modern, modern, but I grew up in traditional houses and I really like traditional architecture and interiors. Good design is good design.” The 10-person dining table by Michael Vanderbyl for Baker is surrounded by walls covered in sepia-toned hand-painted paper from Griffin & Wong. The chandelier, made of Czechoslovakian crystal, was installed in 1961. The sconces, from the 1920s, originally held candles but were wired for light bulbs.

The couple had complete faith that Popp Littrell was up to the job, but there was a clear mandate: “We told Curtis, ‘You’re not going to build your house, you’re going to build our house.’ But he did push us, and you see those touches in the home,” says Reynoso. “What we wanted was a traditional home that spoke to the contemporary in places, and that is exactly what we got.”

The home’s return to glory begins in the foyer, where ill-conceived ceilings were removed to make way for a dramatic entry to the 4,500-square-foot home. A bar once situated near the front door—“It was a Mad Men thing, as soon as you got home there was a drink waiting for you,” jokes Camsey—was replaced with a powder room. The pool house, which was in rough shape and had no foundation when the homeowners moved in, includes a Murphy bed, kitchenette and full bath with a sauna.

The formal living room, like the rest of the home, is decorated with an eclectic mix of furnishings and artwork, most of which the couple already owned—some traditional, some modern, all of it a personal reflection of the homeowners. Popp says both men brought to the project a sharp eye for good design. “Randy is so good at homing in on the little things and creating vignettes, while Martin is probably a little more like me, good with big-picture kind of stuff. They are very complementary.”

The dining room is a study in gracious formality—a dream space for a couple that loves to entertain. “Randy and Martin are like my parents and their friends when I was growing up,” says Popp. “They like to sit down for big dinners and have cocktails and enjoy a good time.” In the den, a marble fireplace and the bookcases flanking it are virtually the only vestiges of the original home. “Everything else was gutted,” explains Reynoso.

They aren’t the first owners to wine and dine visitors at the residence. Former lieutenant governor Ed Reinecke and his wife Jean, who resided there in the early ’70s and were close friends of the Reagans, held many glamorous soirees that included A-list guests like Liberace and Frank Sinatra.

The comfortable kitchen, once dingy and oddly configured, was reconceived with both practicality and beauty in mind. “We wanted a space that was intimate but larger than the original kitchen, and also to have flex space where people can hang out,” explains Popp. The centerpiece of the master bath is the soaking tub. The Cole & Son wallpaper is complemented by Birdie sconces by Foscarini, which have a sleek, organic look. “Curtis insisted on this room,” says Reynoso. “I thought it might be a waste of space, but now I love it.”

Informal dining happens around the walnut-topped Saarinen table, which is surrounded by vintage rattan chairs by McGuire that were covered in Maharam fabric. (They used the reverse side of the material because of its subdued pattern.) “I really wanted the juxtaposition of the McGuire chairs with the modern table,” says Reynoso. The Moooi light fixture above the table is a contemporary touch that Popp pushed for. Calacatta marble countertops, with their honey-toned swirls, brighten the space and give it a sense of understated luxury. “The simple tile backsplash makes the marble look more gorgeous,” says Camsey.

The home’s upper level mixes the practical (a closet dedicated to gift-wrapping, thoughtfully outfitted guest rooms) with the posh (a spacious walk-in closet, a warming drawer for bath towels). One of the more indulgent features in the home is the soaking tub in the master bath. “It’s the ultimate luxury,” says Popp. The upholstered banquette is where guests can enjoy a drink while the couple cooks. Behind the pocket door, the butler’s pantry, with its sunny-hued cabinetry, serves as a buffer between the dining room and kitchen and is a convenient place for storing wine and glassware.

There’s little question that Popp Littrell succeeded in their mission to return the home to its original grandeur, and the owners couldn’t be more pleased. “Randy has called me two or three times just to say just how much he loves the house,” says Popp.

Of course, it takes conscientious stewards to breathe life back into a house where every crown molding and baseboard had to be restored. “Anybody else would have torn this house down. They never would have saved it,” says Reynoso. “But Martin and I are preservationists. We wanted to preserve it because we felt like the home spoke to us. We knew it could be brought back to what it was or better.”