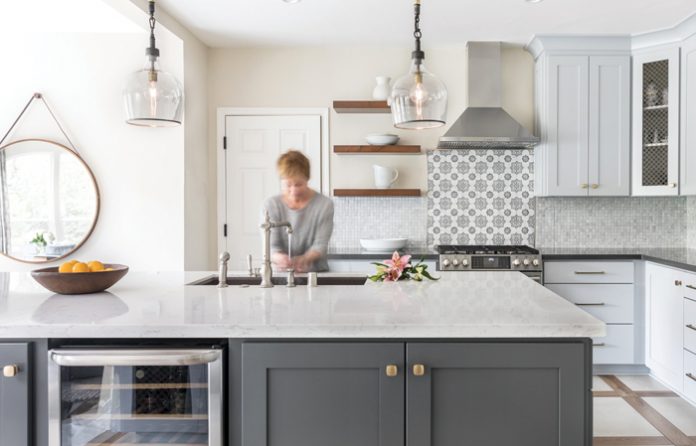 “When I think of traditional Spanish design, I see a beautiful blend of cultural motifs influenced in shape and pattern by nearby Morocco, coupled with the warmth of slightly rustic materials like wood and metal,” says interior designer Kristen Fiore. She certainly had Spain on the brain when designing the living space for Lisa and Joel Vesga, helping bring flavors of Joel’s hometown of Barcelona into tasteful play.

This is most apparent in the kitchen’s backsplash accent tile, which features a pattern inspired by the historical Catalan Modernism style. “We love going to the big landmarks in Barcelona when we visit family,” says Lisa. “The backsplash is a bit of a tribute to that. It is my favorite part of the kitchen.”

But not all design choices were that poetic. “A major design challenge was negotiating the split-level kitchen that stepped down into the breakfast nook and created two disjointed spaces,” explains Fiore.

To solve this without building the floor up, she employed two design tricks. One was using a large-format tile—coincidentally manufactured in Spain—throughout the entire space. The second was lengthening and extending the island and adding bar seating at the end. “You still have to step down, but the space flows more cohesively, since the island is a single plane,” Fiore adds. The island very much suits the Vesgas’ Euro entertaining style. Says Lisa, “We like just being able to put a big spread out on the island and having people stand around and chat.” 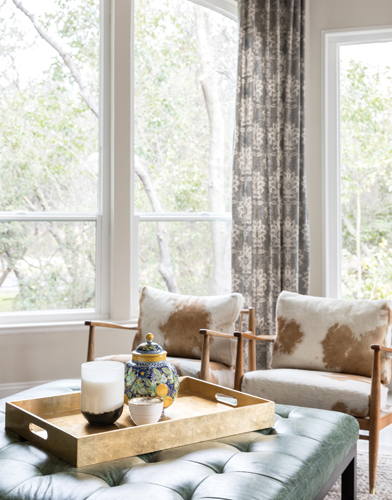