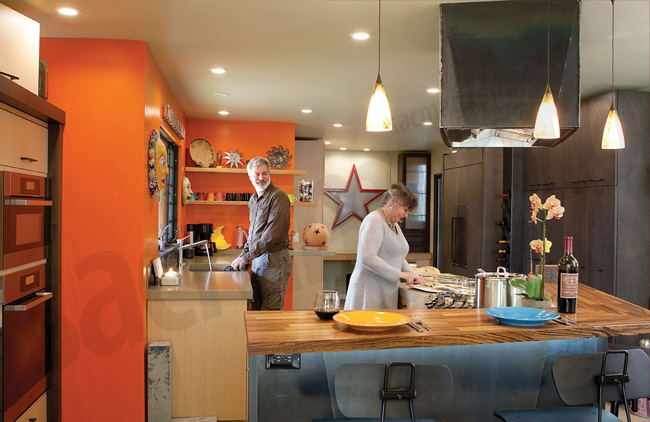 Lori and Hank Lamon wanted a new kitchen. But not a show kitchen. That’s just not their style. The remodel they pictured would open up their little U-shaped space to the dining room, add some much-needed function and bring in a fresh, “funky” vibe. Not the usual order, especially the last part. “I’m a regular rule breaker,” Lori says. “I wanted some funk to it, and I’m not afraid of color.”

She remembers walking into Nar Fine Carpentry, Inc. in Carmichael, talking to owner/principal designer Nar Bustamante and thinking,“This guy knows what I want. . . . He’ll make it funky.” He did that and more.

Today, the space has all the uptown style and built-in practicality the Lamons were looking for—so handy when guests who like to cook pop in. “At Thanksgiving, we had four or five people in here . . . cooking together, talking, laughing, drinking wine,” Hank says. “That’s exactly what we had in mind.”

THE HOUSE: A ranch-style home in Yuba City built in the 1970s.

THE PLAN: The Lamons had been looking through design magazines for two or three years when they decided to move forward. “Nar drew up the design, and it was way better than anything else we had seen,” Hank says.

RULE-BREAKING: Instead of the standard square or rectangle, the island is angled.

WHY IT WORKS: The island’s unusual shape looks great, defines the space, eases foot traffic and offers plenty of room for cooks.

ON THE SURFACES: Concrete countertops surround the sink and form the working surface part of the island. (Look at the island’s backside and you’ll see the concrete angled in a waterfall configuration that echoes the lines on the ventilation box above the cooktop.) Zebrawood, Patton says, was chosen for the island’s dining surface to add pattern and warmth and cut any “clink, clink” noises from glassware or cutlery. The floor, 12-inch by 24-inch brushed porcelain tiles, was laid so no three consecutive tiles were aligned in the same direction. (Subtle, but wow.)

MAN OF STEEL: Hank, whose construction company builds schools, had a number of kitchen pieces fabricated in his shop. Welded steel accents the island, serves as a backsplash for the sink and covers the remote-controlled ventilation box above the cooktop. Wine racks flanking the refrigerator and panels behind the appliance’s oversized handles also are steel.

HEAVY METAL: “We wanted something with beef, with substance,” Bustamante says about the hardware. “In a contemporary kitchen, people try to hide it, but I thought, ‘We’re welding, we’re putting concrete in. We need to step it up.’”

COLOR TALK: “One of the first designs had an ‘earthy’ tile on the wall, and we nixed that,” Lori says. “It looked great, but I wanted to go a little more funky. I wanted more funk.” As Hank says, “More orange.”

TANGY WALL TONE HITS THE MARK: When color authority Pantone named Tangerine Tango its Color of the Year 2012, Patton thought it might make the cut. It got a thumbs-up all around

DINING EXPERIENCE: Materials complement kitchen themes. A wide concrete counter is sandwiched between sleek new cabinets outfitted with acid-washed zinc panels at the top. LVL shelves affixed to side walls are anchored with aircraft cable and appear to “float.”

ART? YES!: Lori’s artist’s eye for colorful ceramics and accessories puts a bold stamp on the space. She found the star (hanging above the desk) at Smith & Hawken.

RULE-TWISTING: The oven/pantry area includes two overhead cabinets angled on a shelf that overlaps midspan. “We reached a point where we began to pick up ideas and add details that weren’t necessarily in the original plans,” Bustamante says. “Twisting the cubbies on angles was a part of that.” Just one more way to break some rules.