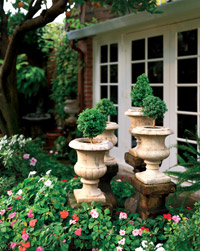 What does a pink necktie have to do with designing a house?

That’s the question Denise and Norbert Pappenberger asked when they met with local architects Paul Almond and Pam Whitehead to discuss the new family home they wanted to build. Instead of talking square footage and architectural styles, the Pappenbergers found themselves poring over pictures of things seemingly unrelated to houses—things such as pink ties and blue sweaters, sunsets and people. “We were a bit baffled,” Norbert recalls.

But there was a method to the madness. Almond and Whitehead—a married couple with their own firm, Sage Architecture, Inc.—like to get to know their clients from the inside out before they start designing. To that end, they give clients a detailed questionnaire (sample questions: “What are your favorite books?” and “What foods do you like?”), show them evocative photos and interview them for hours. “They start to loosen up,” Whitehead explains. “We get a pretty good understanding of a client’s personality before we ever put pencil to paper.”

They distill their findings into a booklet filled with images, phrases and concepts that serves as a road map for the project. In the Pappenbergers’ case, the five-page booklet included photos of the pink tie and of a man standing on his head, and chapter headings such as “Quirky” and “Engaging.” What the Pappenbergers wanted, say the architects, was a house that was inviting, flexible, modern and, above all, fun.

Because the Pappenbergers are inveterate art collectors, Almond and Whitehead decided to create a house that would be both a gallery and a work of art itself. They designed a gallerylike hallway that runs down the center of the house like a spine, with rooms off each side of the corridor.

To keep the budget under control, the owners had to scale back their original plans, which called for about 3,500 square feet of interior space. In the new, 2,200-square-foot design, the gallery does double duty, serving both to exhibit art and to extend the living space. The living and dining rooms open up to the gallery, allowing people to spill over into the corridor when necessary. Fifteen-foot ceilings and clerestory windows bring light into the space.

Almond and Whitehead, longtime fans of the influential The Not So Big House series of books by Minneapolis architect Sarah Susanka, suggested other ways to reduce square footage while retaining the design details that make the house unique. They used floor-to-ceiling windows in the living room to visually open the space, and a decorative colonnade made of engineered lumber posts to separate the living and dining rooms from the gallery without walling the spaces in.

The architects designed a compact but efficient kitchen, and a laundry room that also serves as a pantry and family command center, with lots of storage and a counter for purses, backpacks and packages. Almond compares the process to designing a boat, where every inch counts.

They tucked a tiny office for Denise, and an equally diminutive guest room, into the wing that houses the family room. And they kept the bedrooms lean and mean—“We just sleep there, so we didn’t need a lot of room,” explains Denise. An added benefit: The couple’s two children don’t spend a lot of time in their rooms. “We designed it so they’d be forced out of their rooms and into family life,” says Denise.

All that economizing on space enabled the Pappenbergers to splurge on interesting materials, such as slate tile and honed granite countertops in the master bathroom, and concrete floors throughout most of the house.
On the outside, the bright blue-and-yellow stucco house exudes a confident, look-at-me presence. Almond and Whitehead put a modern spin on the traditional gable-form building, using corrugated metal for the roof and overhangs, and commercial-style aluminum-framed windows and doors.

Just because it’s wintertime doesn’t mean your garden has to be a wasteland. According to local landscape designer Candace Schuncke, if you pick the right plantings, your winter garden can be a thing of beauty.
“I like gardening in winter,” says Schuncke. “There’s a lot you can do.”

Schuncke relies on ornamental grasses, shrubs that produce berries, citrus trees, and plants with colorful foliage to bring excitement to the garden in the dreary months. One of her favorite plantings is Mexican thread grass (pictured at right), an ornamental grass with a light, airy appeal. Other good winter grasses: blue fescue and deer grass.

Berries are another way to add interest at a time of year when there isn’t a lot going on in the garden. Toyon—also known as Christmas berry—is notable for its clusters of bright red berries, which are irresistible to birds. Cotoneaster and holly also are good berry-producing choices.

Citrus trees also bring life to the winter garden. Meyer lemon is one of Schuncke’s favorites—she loves the cheerful yellow of the fruit against the dark green leaves. And don’t forget about foliage, which can give the garden an instant infusion of color. Nandina, or heavenly bamboo, is renowned for is delicate foliage, which turns a fiery crimson in winter.

And if you look out your window this winter and feel like you need a quick visual pick-me-up, Schuncke says, just head down to the nursery and buy whatever’s in bloom. Colorful pansies, snapdragons or cyclamen are a surefire cure for the winter-garden doldrums.

Get Pruning
Wondering how and when to prune your stone fruit trees? The Fair Oaks Horticultural Center would like to help.

The center will hold a two-hour workshop Jan. 8 at its demonstration orchard. UC Master Gardeners will show how to properly prune fruit trees and answer questions.

“In the winter, fruit trees are dormant, so you can get a good view of a tree’s structure,” says Phil Damewood, a Master Gardener who helps run the demonstration orchard. “It’s a great time to prune.”
Damewood offers these pruning tips:

> Use the right equipment, and keep your tools sharp to avoid wounding the tree.
> Don’t hack at the tree; a clean cut heals more quickly than a ragged one.
> To avoid spreading disease, disinfect your tools from one tree to the next.
> Remove dead and broken branches, as well as branches that rub together or cross one another.

The free workshop begins at 9 a.m.; reservations are not required. In the case of rain, the clinic will be held on Jan. 15. The Fair Oaks Horticultural Center is in Fair Oaks Park, located on Fair Oaks Boulevard south of Madison Avenue. For more information, call (916) 875-6913 or visit cesacramento.ucdavis.edu.

Itty-Bitty Boxwoods
When interior designer Thom Voorhies came across several small, antique marble urns for sale, he was enchanted by their elegant shapes and diminutive size. So he snatched them up for the garden of his Sacramento home.

The question: what to plant in them? The containers’ planting holes are tiny—about the size of a large soup can. Voorhies decided upon miniature boxwoods. “They’re the ideal plant for these urns,” he says, “because they look so sculptural.”

Voorhies keeps the shrubs small by trimming their root balls once a year. “The tighter the root ball, the smaller the bush,” he explains. They’re easy to move around the garden, and equally easy to maintain: In summer, he waters them daily; in winter, he moves them close to the house to protect them from frost. To retain their sculptural shape, he gives them an occasional trim with a pair of scissors.

He’s since created similar plantings for clients. The English urns, dating from the mid- to late 1800s, are available at Now and Again at Southfield Gardens, a garden antiques store in East Sacramento, and cost about $200. “They look great anywhere,” he says.