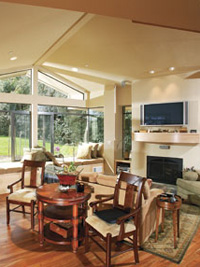 When Marsha Roberts, 80-year-old mother suffered a serious fall at her Santa Cruz home, the Carmichael resident knew she had to do something.
“It was time to get her up here,” says Roberts.

She and her husband, Charles, debated their options. They could move her into an independent-living facility, but they wanted her closer by. They had a little cottage in their backyard, but it was unsuitable for an older inhabitant with mobility issues.
So they decided to knock down the cottage and build anew.

Working with Vancouver, British Columbia, architect Bert Chase, they designed a 1,000-square-foot house that is the mother of all mother-in-law cottages: functional yet stylish, warm yet modern, hip even. One thing’s for sure: It’s definitely not your basic granny flat. “I think it’s terrific,” says Robert’s mother, Wilma Laurence.

The cottage is the first thing you see when you drive up to the property, so appearances count. From the outside, the six-sided house looks a bit like a Japanese pavilion, with wide eaves, large expanses of glass and lush, landscaped planting beds that hug the building. Connected to the main house by a meandering pathway, it complements the Roberts’ own modern home without slavishly copying it.

Inside, vaulted ceilings and lots of windows give the compact house a generous sense of light and space. The house wraps around itself, almost like a snail shell, with one room flowing into another: living room, dining room, kitchen, laundry room, bathroom and finally bedroom. At the center is a loft space for storage.
Roberts wanted the house to “envelope” her mother, so Chase varied the ceiling heights to create small, cozy areas, such as a window seat in the living room that stretches across one wall. “That’s her guest room,” says Roberts, noting that the cushions are made of mattress-like foam; underneath, large pullout drawers provide plenty of storage. Generous windows flood the space with afternoon sunlight.

Laurence, a violinist and founding member of the Santa Cruz Symphony, wanted a place in her new home for her instruments. So for her upright piano, Chase designed a niche in the living room, flanked by built-in cabinets to hold her collection of violins and file drawers for her sheet music.

On the opposite wall, a gas fireplace warms the room at the touch of a button. “It’s so nice if she wants to take off the chill,” says Roberts. A plasma TV hangs over the cantilevered mantel, made of maple to match the custom maple cabinets throughout the cottage.

When she moved in two years ago, Laurence was able to get around by herself. But this past November, an illness cost her some strength and mobility, so now she uses a walker. Thankfully, Chase and Roberts designed the house to be entirely handicapped-accessible: There are no stairs, and the doorways are wide enough to accommodate a wheelchair. In the bathroom, the shower has a built-in bench seat; there’s no curb or door to restrict access. “We wanted her to be self-sufficient,” Roberts explains.

Double doors with frosted-glass panels lead to the bedroom, where another wall of built-in cabinets includes a drop-down desk. French doors open onto a small patio with a bistro table and two chairs, surrounded by a private garden.

Roberts selected all the furnishings, using a color palette of cream, slate and rust that she borrowed from a Santa Fe Opera poster Laurence brought back from a trip. She used natural materials throughout the house: cherry wood and slate for the floors, granite for the countertops and maple cabinetry with iron hardware. Overall, the effect is modern yet warm.

Roberts was thrilled to be able to create a safe, serene haven for the mother she loves so much.

“I’d always wanted to do something nice like this for my mom,” she says. “It was a lot of fun in some ways, even more fun than designing my own house.”