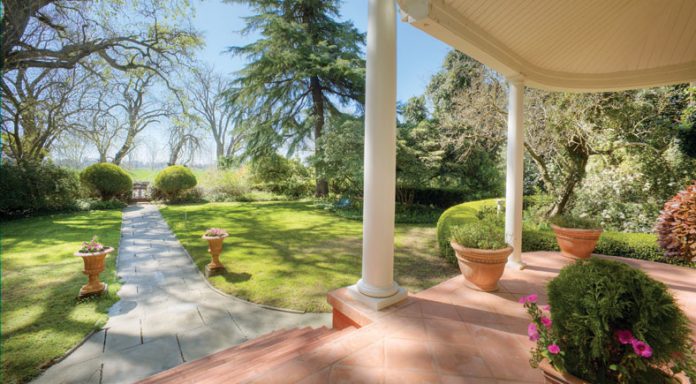 In Winters, a Queen Anne Victorian gets the royal treatment.

After about 40 minutes of driving past utility poles, the occasional hawk or turkey buzzard and farmland—lots and lots of farmland—you start thinking you must have messed up the directions to Angelo and Paolo Ferro’s Victorian home in Winters. But just as you’re sure you should head back the way you came, a witch’s hat turret materializes through massive tree branches like an illustration from a storybook.

“We’re used to not having neighbors,” says Paolo, smiling and talking about the home’s splendid seclusion. He and twin brother Angelo are walnut farmers with operations in Linden and Fresno. In 1992, they were exploring the hinterlands of Winters, looking for more acreage, when they discovered and bought the Queen Anne and its 130 acres. “We saw this house sitting by itself and it looked like it needed some attention,” Paolo says. “Our ranch in Linden is very secluded, more so than this, so we’re used to that and we love it.”

The brothers have pieced together some of the home’s history from local newspaper stories, letters, photos and the occasional visitor who stops by to chat. Built by prominent Yolo County rancher George Washington Scott in the 1860s, it once was part of a 10,000-plus-acre spread where he raised livestock, mostly sheep.

The Ferros don’t farm in Winters but use the house to kick back and enjoy life. Which means they love to repair old things, build new things, put new and old things together and generally create order from disorder. Plumbing, electrical work, gardening, welding, painting, waxing floors, carpentry: You name it, they’ve done it or brought in expert help. “It was a big project, but all we had to do was make the house homey and comfortable enough to have family stay here,” Paolo says.

The Ferros may love seclusion, but they also love company. “We have a big Italian family,” says Paolo, noting some come from as far away as Argentina and Italy to visit. “We realized this would be a good spot for the family to converge.”

With 6,000 square feet of living space, including a con-verted three-story water tank tower, guestrooms weren’t a problem. But comfort? Angelo and Paolo have made that their goal for every square inch of the grand old mansion.

They had a new roof put on and rehabbed the front porch floor, choosing Saltillo tile because it looks so much like the Victorian-era tile it replaced. They outfitted the kitchen with a new floor, granite counters, an island and stainless steel appliances. Walls and woodwork were freshened with white paint, and an adjacent bathroom was redone, top to bottom.

While the Douglas fir floors in the main downstairs spaces were refinished, the rest of the woodwork needed sprucing and not a lick more. Same for the formal fireplaces. “We had someone tell us to strip the wood,” Paolo says. “We had a different idea.”

But upstairs, gallon after gallon of fresh paint was rolled over the dreary hues preferred by a previous owner, and the master bath got the works: a marble floor and tub. A mirror frame above an imported carved console with two sinks looks original—you’d never guess the brothers assembled it piece by piece from wood moldings. And the cozy balcony off an upstairs bedroom? Angelo welded some of the original gewgaws they discovered scattered about the grounds onto the railing.

The “project” the Ferros began 17 years ago has never really ended, they say. On a house this size, you finish painting one gable and the one around the corner needs a new coat. But they don’t mind. “Our parents taught us from a young age that anything we wanted we would have to work very hard for,” Angelo says. “And they told us—both my mother and my father, but especially my father—that if you were going to do something, you had to do it right.”

Over the years, that’s what they’ve done, and the house has been just what they wanted it to be: a getaway for them, their family and friends. “There were times when we had 50 people here,” Paolo says. “Those were some of the most fun times we’ve ever experienced . . . it has always been a fun place since the time we bought it.”