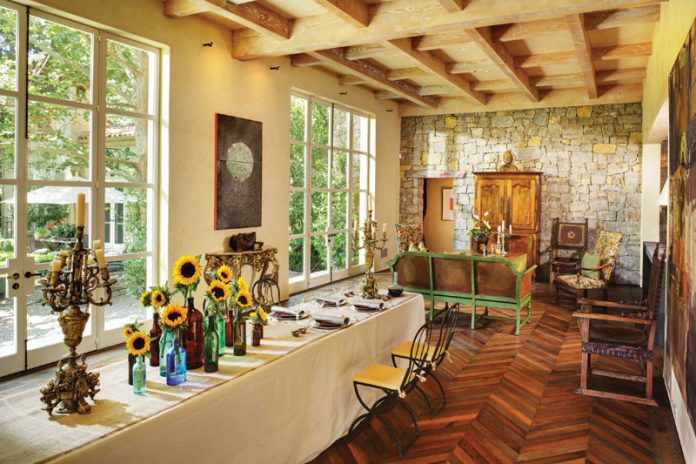 Landscape architect David Gibson uses plants and stone to create his art. Fine artist William Ishmael’s passions run to paint and canvas. Walk through the gates of their home off Fair Oaks Boulevard, and you step into another world—a world where everything fits, where there’s nothing lacking, nothing extraneous and each beautifully finished surface or carefully placed  furniture piece tells a story. There was never any hurry to get things done here. And it shows.

Everything in Its Time
The night before Gibson bought the two-thirds acre lot in 1987, he stayed up to the wee hours drawing a site plan that included a guesthouse and a two-story main house. He built the guesthouse first, moving in in 1990. Shortly after, he planted a London plane tree precisely where he knew it would someday shade both structures. “I started out thinking it was going to be a 12-year plan,” he says. “It turned out to be 22 years.”

Today, the guesthouse is Gibson’s office. He and Ishmael lived in midtown for years and began building the main house in 2006. They moved in about two years ago. “My passion as a designer is to express the personality of the individuals who live in the space through the world around them,” Gibson says. “This home speaks to our amalgamated lives. William brings his art and Kentucky heritage. I was born in Sacramento; I bring my Western outlook. He brings his love of the spiritual and the culture of Asia; I bring my love of France. This home is expressive of both of us.”

Doesn’t Feel ‘Decorated’
Sacramento interior designer Nikke Van Derheydt-Sosnick and Gibson have known each other since they were kids and have a rich history of working together on design projects and on each other’s homes. She was in on this one from the drawing stage. “I love this house,” she says. “It’s magical and definitely speaks to William and David. That is why, even though it is a grand space, people feel comfortable in it.” As Gibson designed and built the house, he relied on another longtime friend and colleague, Larry Struck of Struck Lomax Associates, Architecture + Design in Santa Rosa. “Larry and I and Nikke have worked on countless projects together,” Gibson says. “Everybody brings something very special to the table.”

In With the New—In With the Old
“Every piece in this house tells a story about William and I, or our friends and family,” Gibson says. Ishmael brought the table from Kentucky, the bench was purchased in a Sacramento antiques shop, and the needlepoint-covered chairs were discovered in San Francisco. Master cabinetmaker Dave Puente’s work is evident throughout the house, including the retrofit of 18th century walnuts doors Gibson found in Europe that conceal the refrigerator and pantry. “He does some of the finest finishes of anybody in this area,” Gibson says. Other aspects of the kitchen came about over time. The island of California black granite, for example, was just recently installed. “Everything I do is on the 40-year plan,” Gibson says, laughing. “You go for the best and just do it slowly.”

Rock Steady
Crushed gravel is the primary element underfoot in Gibson’s garden rooms, providing continuity throughout the terraces, courtyards and gathering spaces. “Water drains right through it, and there’s not a lot of runoff from the property,” he says. If you want to give this a whirl in your own landscape, here’s a tip: Understand the difference between crushed gravel and pea gravel, and go for the crushed. Why? Pea gravel is rounded and never locks together, Gibson explains. “So when you walk on it, you’re really working at it, like on a sand beach.” And because pea gravel is rounded, it rolls . . . into the house, onto walkways, porches and other places it doesn’t belong. But crushed gravel, which has straight edges, stays where you want it. Gibson prefers the smaller pieces, â…›- to â…œ-inches in size.

For borders, he likes the rough texture of hand-cut granite cobbles, and for thresholds on the main house, he chose granite from the Sierra Nevada. “Those thresholds will never rot, they will never need to be painted . . . and they get better looking with time.”

Backyard Hideaway
You’d never guess other people live anywhere close to this pool. But they do. “There are houses all around,” Gibson says. Instead of surrounding the pool with wide-open paved areas, Gibson chose plants, which keep the area sequestered and serene. “My personal preference is to keep things soft and green so you highlight the landscape and not the paving,” he says. “All too often, I think, people like to pave things over. What’s the point unless it’s an urban courtyard, which is lovely, but sometimes it’s nice to keep things soft.” Plantings around the pool include white-flowered hydrangeas, fruitless olive trees, pittosporum and viburnum, commonly known as snowball. “Pittosporum is marvelous and so easy to grow. With that and white oleander, how can you go wrong?”