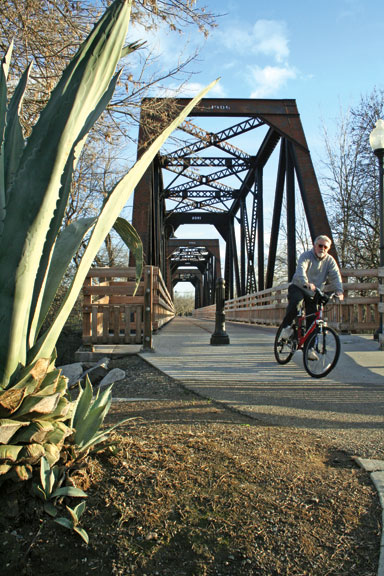 Its name linked not to the calendar but rather to an early settler (Theodore Winters, a wealthy landowner who helped lure the Vaca Valley Railroad through town in the mid-1870s), this south-central Yolo County settlement has a charm for all seasons. With springtime fast approaching, many of the surrounding orchards are at their blossoming best, and the arrival of fresh asparagus signals the start of a harvest schedule that reaches all the way to December. Agriculture, certainly, represents the root of Winters’ existence, but this proud town of some 6,000 residents beckons for other reasons. It’s close—just 30 miles west of Sacramento, a journey popular among area cyclists. It boasts some great places to eat, shop and see art. And it rocks, with one of the most exciting live-music venues around.

Attractions: For years, The Palms Playhouse occupied a rickety-rackety barn in south Davis, but six years ago it relocated to Winters’ Opera House building (13 Main St.), which had been restored to much of its 19th century glamour. Tap your toes at The Palms, which hosts hip alternative and folk musical acts from throughout the country and launches its March lineup with vowel-challenged Lynyrd Skynyrd tribute band Skynnyn Lynnyrd on the first. Get your fine-arts fix during the Winters Art Walk, conducted all day on first Saturdays and encompassing about 10 galleries and other businesses. Embrace the outdoors by strolling along the Putah Creek Nature Trail, which crosses the Historic Railroad Trestle Bridge, or stop by the Winters Chamber of Commerce (201 Railroad Ave.) for free brochures on the town’s two self-guided walking tours.

Shopping: You’ll find a majority of Winters’ best stores and restaurants in a one-block radius from the intersection of Railroad Avenue and Main Street. Although their addresses would indicate otherwise, Regalare (11 Main St.) and Cloth Carousel (9 Main St.) bracket The Palms’ entrance. The former is a cozy small-gifts store; the latter is chock-full of colorful fabrics and hosts sewing and quilting classes throughout the year. If you’re into art and antiques, be sure to stop by The Winters Antique Co. (304 Railroad Ave.) and, across from gazebo-graced Rotary Park, Attic Gallery (7 E. Main St.), which local resident Valerie Whitworth—“I’m a newcomer, been here only 21 years”—calls “a really neat little spot.” Whitworth is keenly involved with the Winters Participation Gallery/Center for the Arts (18 Main St.), which this month plans to exhibit agricultural and architectural photographs by Shaun Mattio. Stop and smell the roses at Chris’ Florist (22 Main St.), a tidy shop that in addition to petals peddles coffees and chocolates. Sometime during your visit to Winters, drive a few blocks over to Briggs & Co. (820 Railroad Ave.), a versatile and sophisticated combination art gallery, working studio and sculpture garden that has made a name for itself in the region’s growing art community.

Drinking: Satisfy your caffeine cravings at Steady Eddy’s Coffee House (5A E. Main St.), whose signature “brews” are all organic and fair-trade. Sip samples of award-winning, estate-grown Yolo County Syrahs, Malbecs, Zinfandels and more at the Berryessa Gap Winery tasting room (15 Main St.), open Fridays and Saturdays from 4 to 8 p.m. and by appointment. For a potentially rowdier (but still tame) time, step into JJ’s
Saloon (318 Railroad Ave.) or Irish Pub & Coffee House (200 Railroad Ave.), where comedians real and imagined take the stage the first Thursday night of the month.

Eating: Considering its proximity to the agriculturally progressive Capay Valley and other rich farmland (and that it claims among its residents celebrated food writer/cookbook author Georgeanne Brennan), Winters has some serious foodie appeal. Seasonal ingredients harvested by local farmers and regional wines take center stage at Monticello Bistro, offering intimate prix-fixe dinners Saturday nights and brunch/French tea on Sundays inside Steady Eddy’s. To sample the town’s best-known restaurant, make reservations at Buckhorn Steak & Roadhouse (2 Main St.), on the ground floor of the 1890-constructed Hotel de Vilbiss, a venerable structure that remained intact during an otherwise devastating 1892 earthquake. (Every August, Winters celebrates its shaky past with an Earthquake Festival.) For breakfast or lunch, try the affiliated Putah Creek Cafe (1 Main St.), a friendly locals’ hangout with scrumptious baked goods, or Cody’s Deli & Catering (314 Railroad Ave.), a spacious soup-and-sandwich eatery. If you visit on a Friday night, order tapas at Ficelle (5C E. Main St., behind Steady Eddy’s).

The French Connection—Georgeanne Brennan, one of the country’s most prolific cookbook authors, divides her time between a home just outside Winters and one in French Provence. Her latest book, A Pig in Provence, is a memoir. Another recent work, Village Walks: Provence and the Côte d’Azur (Chronicle Books, $14.95), consists of a box of 50 cards that suggest strolls through neighborhoods in French towns such as Marseille and Avignon.

How to get there: One of the best things about visiting Winters is the drive between it and Davis, on Russell Boulevard. Pretend you’re in rural France as you motor (or cycle) along portions of the tree-lined byway that passes by fruit and nut orchards. Take Interstate 80 west just past the UC Davis turnoff to Highway 113, then head west on Russell to Winters. Truckee.