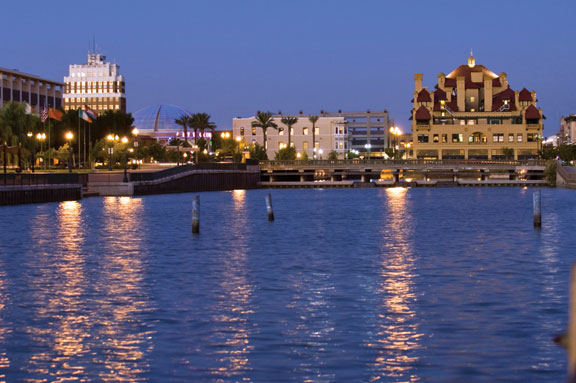 Stockton is on the move. While there’s still a gritty edge to this Central Valley city, much of it is being replaced by fresh, vibrant life. Check out the city’s  rejuvenated Miracle Mile district and, less than a mile away, the emerging downtown core.

Exploring the Miracle Mile. This compact, easygoing, shopper-friendly district is roughly defined as Pacific Avenue between Castle Street and Harding Way, with small stores, low-profile brick and stucco building facades, public art, and ample (and free) street parking. More than a dozen new stores and eateries have opened in the past few years, and more are coming. (All addresses are on Pacific Avenue unless noted.)

Knit Witz Yarn Boutique (No. 2007) carries a mind-boggling assemblage of yarn. At Simply Charming (No. 2113), poke around the smart selection of gifts and glasswork, then at Mood Swings (No. 2125), browse among jewelry, candles and incense. Architectural Amenities (No. 2363) displays eclectic and designer lighting fixtures, sinks, faucets, tile and drawer pulls to spiff up a kitchen or bath. Across the street, Bill’s Music Sales (No. 2312) packs an impressive array of electric and acoustic guitars. Oddly named Hubba Hubba Antiques (No. 2026) has more than two-dozen vendor stalls of furniture and collectibles, not one of them simply filled with junk. For works by local artists, visit the Stockton Art League’s Elsie May Goodwin Gallery (No. 1902). Or veer off the Miracle Mile a mile or so to discover the city’s venerable art and history venue, The Haggin Museum (1201 N. Pershing Ave.) in Victory Park.

French, Vietnamese, Japanese, Chinese and American restaurants reflect Stockton’s cultural diversity. Local foodies flock to CoCoro (No. 2105) for sushi and sophisticated Japanese fare. If beer-battered yam fries, a half-pound burger and a choice of 10 house-brewed beers sound intriguing, Valley Brewing Company might be your call (157 W. Adams St.). Or grab a hefty sandwich and some sides from Gian’s Deli (No. 2112).
Consider timing your visit to catch some stand-up comedy at Laugh Track Live, staged twice a month within the Stockton Empire Theatre (No. 1825).

Doing Downtown. To get oriented, hop on the Downtown Trolley. All the major venues and landmarks can be reached in mere minutes for a one-way fare of 25 cents.

Shaping the heart of the new downtown, the Weber Point Events Center (221 N. Center St.) and adjacent McLeod Lake Park form a spacious greenbelt at the end of the deep-water channel running east from the Port of Stockton. Here, concerts and festivals take place throughout the year, staged beneath a massive canopy near the water’s edge. It’s also a perfect spot for picnicking.

Downtown contains a host of historic venues. The 2,048-seat Bob Hope Theatre (242 E. Main St.), a fine example of Spanish Colonial Revival architecture, opened in 1930 as the largest vaudeville house in California and was rededicated in 2004 after a painstaking renovation. Come here for comedy (Frank Caliendo, April 12), concerts (Jackson Browne, April 17), Broadway shows (Rent, May 17) and classic movies. Another refurbished landmark, the circa 1910 Mission Revival Hotel Stockton (139 E. Weber Ave.), is home to a brand-new Paragary’s Bar and Grill.

The arrival of upscale Paragary’s is a step in the direction civic leaders want to take downtown. But before more gastronomical gentrification takes hold, you can savor what’s here now—or been around for almost a century, as is the case with Genova Bakery (749 N. Sierra Nevada St.), established in 1918 by an Italian immigrant and beloved by locals for its French bread, deli and Italian groceries. Another experiential gem takes place Saturday mornings: a renowned farmers market so vast, authentic and exotic, it’s like stepping into a bustling, open-air market in Southeast Asia (Washington and El Dorado streets).

April Festivals—Through April 5, the Brubeck Festival showcases music inspired by jazz great Dave Brubeck, who attended Stockton’s College of the Pacific (now University of the Pacific) in the 1940s and whose quartet helped launch West Coast “cool jazz” in the 1950s and ’60s. And don’t miss the popular Asparagus Festival (April 25–27), which celebrates those skinny green spears with food and drink, eating competitions, crafts and entertainment.

How to get there: Take Interstate 5 south to State Highway 4 east and follow the many visible signs to downtown (El Dorado Street). To reach the Miracle Mile, stay on El Dorado north until Harding Way, turn left and go three blocks to Pacific Avenue, then turn right.