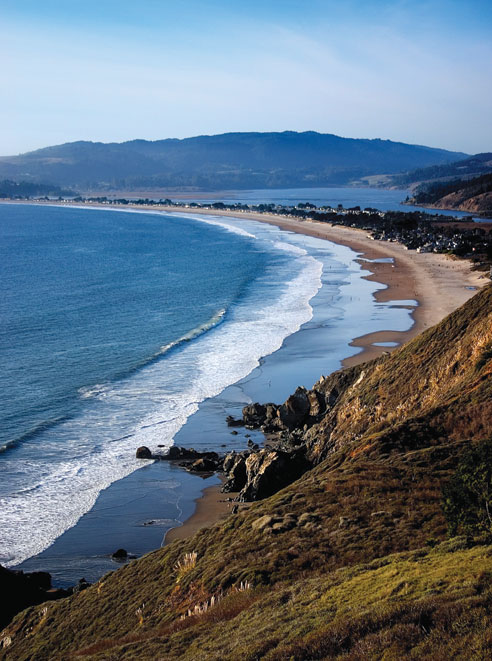 The small, unincorporated Marin County community of Stinson Beach, about 100 miles from Sacramento, has a laid-back vibe in a lush coastal setting that has been luring city slickers since the 1906 earthquake prompted a few San Franciscans to set up shops here. After a morning’s tramp about nearby Muir Woods or Mount Tamalpais, come to Stinson for a wind-down stroll along the magnificent beach and an outdoor meal at one of its popular restaurants.

Attractions: Aside from its beach, this small community lacks sightseeing showstoppers. However, one of the country’s most gorgeous sites is less than 10 miles away: Muir Woods National Monument. For generations, visitors have marveled at its towering old-growth coastal redwoods. Muir Woods’ 6-mile trail system, some of it handicapped-accessible, can be bumper-to-bumper (or, rather, boot-to-boot) on weekends and during the summer, so don’t expect any one-on-one time with Mother Nature. More legroom can be found on Mount Tamalpais’ hiking paths, one of which (the Dipsea Trail) starts at the southern entrance to Stinson Beach, on the right side of Highway 1 as you approach from the Bay Area. From the mountain’s 2,571-foot peak, you should be able to see San Francisco, Mount Diablo and, on an especially clear day, the Sierra Nevada, 150 miles to the east.

Shopping: Pickings are slim but spirited. Find a feminine assortment of jewelry and accessories at Crickets at the Beach (3448 Shoreline Highway), where you’ll likely hear Dixie Chicks songs in the background. In the same building, Live Water Surf Shop rents boards and wetsuits, the latter an advisable adornment in Stinson Beach waters, whose temperature averages in the mid-50s year-round. Meristem Gifts and Stinson Beach Flowers share space down the road a bit (3472 Shoreline Highway), the former featuring jewelry made with stones and semi-precious stones by regional and Israeli artisans. Stinson Beach Books (3455 Shoreline Highway) makes the most of limited shelf space, peddling new releases in a variety of genres. The community’s don’t-miss business is Claudia Chapline Contemporary Art (3445 Shoreline Highway), where Chapline’s paintings (including lovely landscapes) and outdoor metal sculptures (mostly of animals) make this one of the North Coast’s more refined attractions.

Eating: Seafood sets the tone at Stinson’s three main restaurants, all of which have fully loaded bars, cozy indoor seating, space-heated patios and—if our weekend visit is any indication—no shortage of patrons. Parkside Cafe (43 Arenal Ave.), closest to the ocean but not in sight of it, beckons for breakfast (try the honey-crusted granola with organic yogurt) and delights diners later with a wide selection of mostly regional wines; entrées such as applewood-smoked turkey sandwiches, coconut-crusted shrimp and oven-roasted lemon thyme polenta; and who-can-resist desserts that include a “big fat chocolate cake.” Another reason to love this place: Its kids’ menu shares space on the same page with a list of cocktails. The attached Parkside Snack Bar has cheaper, faster fare, luring a constant swirl of customers with its $2 chocolate and vanilla soft-serve cones. Sand Dollar Restaurant (3458 Shoreline Highway) is an inviting lunch-and-dinner spot (entrées include salmon tartare and chicken pot pie) that’s been around since 1921. Across the street, Stinson Beach Grill (3465 Shoreline Highway) dishes out oysters on the half shell (a dozen for $18.50), among many other items on a menu that strongly resembles those of its nearby competitors.

The Beach: Three miles long and at its widest several hundred feet deep, its sand approaching the consistency of powdered sugar, the beach here practically begs you to shed those socks and shoes. Many visitors take off more than that, stubbornly pursuing a tan in weather that’s often cool and cloudy but rarely unpleasant. Tiny tots and rambunctious teens splash about in water that slopes ever so gently away, although never warm enough for most moms and dads to join them. Spacious changing areas and outdoor showers help beachgoers in their salty transitions; a sprawling picnic area behind the beach provides picnic possibilities, albeit without ocean views. To gaze at the sea without getting your feet sandy, stop by the above-beach Surfers Grill balcony for fish and chips or other uncomplicated snacks.

A Celebrity Thought—Stinson Beach—one-time home of musicians Steve Miller and Jerry Garcia—puts Garrison Keillor to sleep. Responding to a question posed on his “Prairie Home Companion” website about dreams, he wrote that he “used to have a sleep-inducing meditation: I walked out of a little house in Stinson Beach, north of San Francisco, and through tall dune grass to the beach where I spread a towel and lay down, and I usually was asleep in minutes.”

How to get there: There’s no one obviously superior way to get to Stinson Beach and environs. One good route is to take Interstate 80 west to the Richmond-San Rafael Bridge (I-580) to southbound Highway 101 to northbound Highway 1. That route’s almost exactly 100 miles and takes a solid two hours.