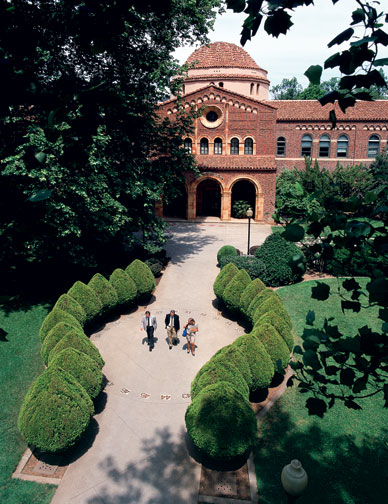 If you’ve never visited Chico—or your impressions of the town are a hazy blur thanks to a weekend (or four-year stint) of partying at Chico State—it’s high time to revisit with a fresh pair of eyes. Surrounded by farmlands and orchards, this picturesque college community is filled with neighborhoods shaded by canopies of mature trees and blessed by an extensive urban park. But the action here is downtown, a thriving 12-block area flanked by the 120-year-old university that’s packed with shops and eateries catering to students and residents alike. Spend an autumn day exploring the town and get into the laid-back student groove. You’ll find Chico’s many amenities and mellow atmosphere offer up a pleasant buzz.

Attractions: Bidwell Park, at 3,700 acres one of the nation’s largest urban greeneries, snakes eastward along Big Chico Creek. Walk, swim, hike or ride your bikes here, or picnic in private, thanks to lots of foliage. Chico State University’s well-manicured campus supports a student body of about 15,000; be sure to check out Kendall Hall, the Romanesque-style 1927 administration building. Classes once were held in the nearby Bidwell Mansion, an impressive, three-story structure built for the town’s founder in 1868 that now is part of the state parks system. (Tours are offered on the hour, weekends 10 a.m. to 4 p.m. and Tuesdays through Fridays noon to 4 p.m.; $2 general.)  The Blue Room Theatre (139 W. First St.) stages plays for adults, and youths, year-round.

Shopping: Chain stores may lurk in its suburbs, but Chico’s downtown boasts many independently owned boutiques well worth a look. Indulge your inner fashionista at Lulu’s Fashion Lounge (212 Main St.) and GiGi Shoe Parlor (112 W. Second St.). Admire the gorgeous tablescapes and foodie finds at Zucchini & Vine (204 Main St.). At Made in Chico (232 Main St.), the first thing we noticed was ball cap that was “Made in Cambodia.” Oh well. Other items include works by local craftspersons and locally produced foodstuffs. Book lovers will want to browse The Bookstore (118 Main St.), jampacked with used titles on every subject. The National Yo-Yo Museum is at the back of  Bird in Hand toy and gift store (320 Broadway), and home to the world’s largest yo-yo, which weighs 256 pounds. Try walking the dog with that!

Eating: Start the day at Morning Thunder Cafe (352 Vallombrosa Ave.), lauded for its enormous servings and applauded by Chico News & Review readers for 13 straight years as the town’s best place for breakfast. Big Al’s Drive In (1844 Esplanade) has an American Graffiti aura. Buy french fries here for $1.50, superthick milkshakes for about twice that.  Red Tavern (1250 Esplanade) is a far more refined dinner establishment that showcases local produce; ask to be seated in the lovely garden patio. Downtown, health food meets fast food at Grilla Bites (119 W. Second St.), one of many bustling eateries and cafes clustered in the first few blocks south of Chico State. Locals celebrate special occasions while dining on California/Mediterranean cuisine at Christian Michaels Ristorante (192 E. Third St.).  House of Nature’s Own (117 Main St.) is new, all organic, all raw and entirely scrumptious.

Drinking: Chico State’s reputation as a party school has softened, thanks in part to a tougher stance taken by the university. But the town’s far from dry. Sip in style at Monks Bistro Wine Lounge (128 W. Second St.). Or, if you want to rediscover your raucous youth, get happy during happy hour at LaSalles (229 Broadway), then push your way into Madison Bear Garden (316 W. Second St.) on an evening when the semester’s in full swing. The ambiance is loud. Back to civilized society, stop by the l20 Sierra Nevada Brewing Co. Taproom & Restaurant (1075 E. 20th St.). This purveyor of pale ale and other popular brews, launched on a very small scale here in 1979, now produces the town’s signature export. Take a self-guided tour of the brewery any time from 10 a.m. to 6 p.m. daily, then belly up to the restaurant’s bar and try the 14-short-glass sampler (about 2 ½ pints total), which will cost you $8 and an undetermined number of brain cells.

Coming right up: More than 100 restaurants and wineries will participate in downtown’s Taste of Chico, Sept. 9 from noon to 4 p.m. The U.S. National Yo-Yo Championship takes place Oct. 6 this year in the spruced-up Chico Plaza.

To Market, To market—Fresh produce from this agriculturally rich region takes center stage at two local farmers markets. All of downtown comes alive at Thursday Night Markets, held April through September from 6 to 9 p.m. and centered at Third Street and Broadway. Produce and prepared-food vendors share the blocked-off streets with local artisans and entertainers, plus shops and cafes stay open late. Saturday’s all-year farmers market, from 7:30 a.m. to
1 p.m. at Second and Wall streets, keeps the focus on food; don’t even try to resist the almond-raisin bread and other luscious loaves at artisanal Tin Roof Bakery’s table.

How to get there: Head north on Highway 99, which passes through Chico, or speed up Interstate 5 and turn right at Orland on Highway 32. The former route’s about 90 miles, the latter 120. Coming home, consider taking the back roads paralleling Highway 99 that meander through Durham, Biggs and other quaint farming towns.