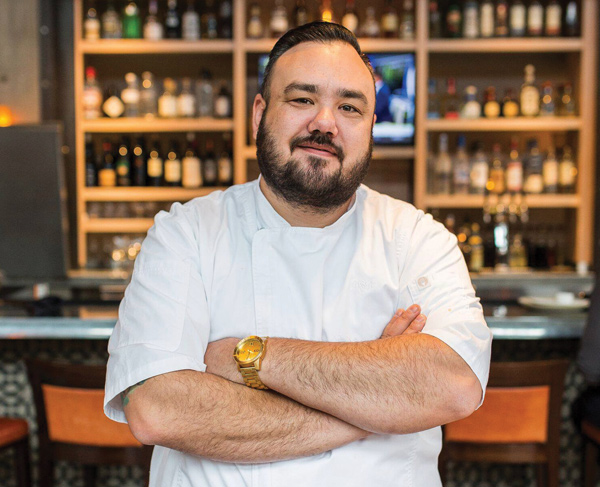 Dane Blom scored his first real chef’s job with a well-timed sticky note. A decade later, he’s the new executive chef at Grange, the celebrated farm-to-fork restaurant attached to The Citizen Hotel downtown. He’s ping-ponged between some of the region’s most notable restaurants, from Napa’s Terra to Hawks Public House. But even with his dream job under his belt, Blom, 32, has no plans of slowing down; he’s got a legacy to build.

Family matters
Blom didn’t start at the top of class. He admits to horrible grades in high school. “What do you want to do with your life?” his father asked. Blom enjoyed culinary classes, he said. The two drove around looking for a restaurant job. Soon, the budding apprentice was punching the clock at Macaroni Grill and cooking for the Fat family—until he was accepted at the Culinary Institute of America. In 2004, he left Roseville for New York. After graduating, he returned to California. Then he ran out of money.

Like a hawk
“I wasn’t ever planning on moving back to Sacramento at all,” says Blom. Nonetheless, he crashed with his parents and kept his ears open. When a neighbor tipped him off to a new restaurant in Granite Bay, Blom drove over. He liked the menu and posted a sticky note on the door: “I want a job. Call me.” Two hours later, Michael Fagnoni rang, and Blom became Hawks’ first hire, in 2007. Hawks “changed the way I looked at food forever,” says Blom. He credits Fagnoni and Molly Hawks as pioneers who helped elevate Sacramento to a fine-dining destination.

Big shoes
Blom signed on as Grange’s chef de cuisine in 2014, where he and then-head chef Oliver Ridgeway “grew insanely close.” When Ridgeway decided to leave Grange in 2018 to open his own restaurant, one of his first calls was to Blom, who had departed on good terms to work as executive chef at Hawks Public House in East Sacramento. In March, Blom returned to Grange as head honcho. “The magnitude of this job, I think, is tremendous,” he says. “Big shoes to fill.”

The producer
Within three weeks, Blom changed almost the entire dinner menu. One could credit the season—springtime is his “absolute favorite time of year to cook.” His mantra is to get out of the way of quality, sustainable ingredients, the “best of the best,” he says. That perfectionism informs his philosophy as a chef and a leader. “I could have a legacy at 32,” he insists, then pauses to reflect. “‘Let’s do it right,’” he eventually responds. “I think that’s what I started to become known for here with my cooks: not taking wrong as the acceptable answer.” So far, so right.