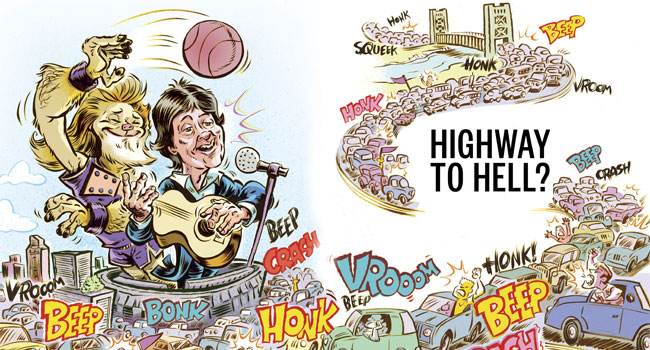 At a relaxed pace, the pedestrian can cover the three blocks from Golden 1 Center to the Interstate 5 entrance ramps at Third and I streets in five minutes. The journey is faster if the pedestrian finds green lights at J Street. Wind and rain can slow the trip, but five minutes is a solid baseline. All this will matter after Oct. 4, when the new arena opens with a Paul McCartney concert.

From the moment the show begins (Sir Paul usually starts his performance with the translucent F major add9 chord that beckons “A Hard Day’s Night”), a new iteration of traffic complexities, frustrations and treasure hunts will begin in downtown Sacramento. That simple, five-minute walk will be a dreamy counterbalance for motorists who seek to cover the same distance by car, the inverse of their reality.

Nobody knows exactly what will happen that first night. But experts have made guesses. The last song McCartney plays, to judge from his concerts this summer, will be “The End,” the final tune recorded by the Beatles. “The End” goes silent after the words “And in the end, the love you take is equal to the love you make.” Those lyrics are a fitting mantra for how the city of Sacramento and the Sacramento Kings intend to get people into and away from the new arena. But there is some disharmony.

City staff and the Kings believe most people will want to drive to Golden 1 Center and park as close as possible, trying to replicate their experience at Sleep Train Arena, nee ARCO. The city council wants the region to seize the transitional moment, expand its horizons of personal conveyance and reduce its dependence on cars. What the city council really wants is for people to either walk, ride a bicycle or take public transit.

When Paul McCartney stops playing, the house lights will brighten and people will leave. Most of them—about 35 percent, the experts believe—will shuffle toward the eastern side of the building, exiting on Seventh Street. Others—about 33 percent— will seek the L Street exits. Fewer will head north, toward J Street. The churning swarm of humanity, more than 17,500 strong, will exit in a joyous mood, the collective spirit warmed to nostalgic bliss by the old Beatle’s deep repertoire of hits.

WHAT HAPPENS BEYOND THAT is a murkier question. The entanglements that occur when people seek parking near the arena, and afterward, when they go back to fetch all those cars and compete with all those pedestrians, cyclists, limos, buses, taxis, Uber and Lyft vehicles and light rail trains—that’s guesswork.

The best guesses are contained in something called the Traffic Management Plan and a massive document known as the Environmental Impact Report. The EIR was prepared by the city under the California Environmental Quality Act, a 1970 state law that requires authorities to consider the problems big construction projects may cause to the environment. That consideration can be controversial—it was the genesis of at least three lawsuits designed to slow or stop Golden 1 Center from being built. The lawsuits failed.

The Traffic Management Plan was still being finalized this summer, but the Environmental Impact Report was done in 2014. It became the arena’s moral barometer, running more than 1,000 pages. The chapter on traffic rumbles across 112 pages and features a rich compendium of words, abbreviations, numbers, charts, photos, maps, likely problems and presumptive solutions. The Traffic Data Appendix, filled with detailed charts, goes on for 650 pages. Despite its heft, verbosity, complexity and flights of clairvoyance, the traffic chapter can be reduced to a tweet: Event today, traffic bad. Sac survives.

The traffic study did things nobody else would think to do. It looked at 52 intersections from Richards Boulevard to 16th and W streets and counted how many cars and trucks went rushing through. Then it forecasted what would happen when the new arena opened. Counts were made for the morning commute, the afternoon commute and an interlude called the “pre-event peak,” which takes place between 6 p.m. and 7 p.m., when many arena events begin.

A majority of the counts focused on 32 blocks around the arena, roughly I Street to Capitol Mall, and 12th Street to I-5. Data from those intersections were introduced to data established by traffic flows at Sleep Train Arena. The data got married. Special consideration was made for people who arrive on foot, bicycles and public transit, none of which happens at the old building.

What the study discovered was something a reasonably intelligent 8-year-old could have surmised: Traffic will be bad around Golden 1 Center, especially before early events, when music lovers and Kings fans and anyone else headed for the arena try to wedge into space on streets and freeways between commuters moving around downtown and trucks headed to Klamath Falls, Ore. In the language of traffic engineers, some streets and freeway exits downtown on these days will receive an “F” grade for level of service. When traffic engineers give an “F,” they mean exactly what an 8-year-old would think they mean.

But hidden within the traffic counts was some good news, a counterintuitive revelation. The forecasts found that even when “pre-event peak” traffic is at its worst, it’s still better than what Sacramento commuters will encounter many mornings when they come to work downtown.

It’s true: The morning commute will be littered with failing grades along I Street, J Street and L Street, between Fifth and Eighth streets. Some of those failures will turn into “B” and “C” grades during the “pre-event peak,” an impressive recovery. The morning will be worse, the experts believe, because the arena is more than an arena—the project includes hotel, office, retail and residential space. When all those caffeine-infused travelers converge with a morning event at Golden 1 Center, downtown will be gridlocked.

“The biggest challenge for us is to teach the public to plan ahead and not drive directly to the arena, but to plan on driving to your parking,” says Linda Tucker, the city’s spokesperson. “It’s no surprise the public is very concerned. They are concerned that there is not one dedicated parking lot like at Sleep Train.”

HAVING ESTABLISHED THEIR BEST GUESSES for when and how traffic will engage itself around the new arena, the city’s experts tried to plan solutions. Some are straightforward and permanent. There will be wider sidewalks and improved crossing signals for pedestrians. There will be more than 30 cameras at key intersections, providing a real-time rationale for city staff to manipulate traffic signals. Seventh Street will be closed to cars during events. The city has introduced a smartphone app called “SacPark Find Your Spot.” It’s supposed to help drivers identify, reserve and pay for parking downtown. Other salvations will be more esoteric. Consider the demise of Sleep Train Arena. Where today the community sees 186 acres in North Natomas to be filled by future developments, traffic engineers see no more trips up I-5 for basketball games and concerts—17 percent fewer miles traveled overall.

But pages of traffic management protocols can’t truly know what will happen once McCartney sings the final words to “The End.” As city council member Larry Carr says, “In the Army, we had a saying: The operation plan only survives until the first gunshot. Then the plan goes out the window. It’s really difficult to make a foolproof plan because fools are so clever.”

Public transit will be vastly more convenient at Golden 1 Center than Sleep Train Arena—there was no public transit at Sleep Train. But traffic experts regard public transit with skepticism. They understand that politically, Regional Transit options must be championed. But in practical terms, those options won’t matter very much. As the Environmental Impact Report says, “Since the project’s added increase in transit riders is far less than the transit system capacity, the level of projected Light Rail Transit ridership would not generate a significant project impact.”

That’s a nice way of saying concert audiences and Kings fans probably won’t ride light rail in substantial numbers, even if train tickets are temporarily free. And they won’t take RT buses. The only people associated with the arena who will likely arrive by bus and train are those who work there, scanning tickets, searching handbags, serving food and cleaning up.

“RT needs to get in the ballgame in a lot better ways with us,” says City Council member Jay Schenirer, who chairs the Regional Transit board. “We can’t have the city doing one thing and RT doing another.”

A BIG QUESTION FOR ARENA CUSTOMERS—“Where can I park?”—is not considered a problem by the experts. There is plenty of parking around the new arena, more than twice the spaces at Sleep Train Arena. The city took a map of the old arena and laid it over downtown, with Golden 1 Center at the heart. The radius is about one-half mile. Inside the map were 4,463 parking spaces in city garages, 10,197 spaces in private garages, and 566 parking meters—15,226 total. Sleep Train has about 7,000 parking spaces.

“We have 100,000 commuters daily in downtown,” says Desmond Parrington, the city planner in charge of the arena. “We need 7,000 spaces for events that take place after the peak rush hour.”

While numbers favor the new arena, the real problem isn’t the parking inventory—it’s whether those spaces will be vacant when people arrive. Nobody knows. As for the experts, they simply predict people will mostly park south and east of the arena. In downtown Sacramento, the private garages are here and there, in plain sight but not obvious, like chocolate chips in a cookie. Finding them will require trial and error.

THE MOST LIKELY SCENARIO on Oct. 4 and thereafter is this: People will figure it out and eventually adapt. Of the 30 teams in the NBA, all but two—Golden State and Detroit—have downtown arenas. Many of those teams once played in suburban buildings. The teams moved downtown. People adapted.

“The most important thing is to plan ahead,” Parrington says.

If anyone has a reason to really worry about the impact of traffic caused by Golden 1 Center, it’s the residents of West Sacramento. The experts say approaches to the Tower Bridge and several nearby streets in West Sacramento will be gridlocked for events. For this problem, traffic engineers offer no soothing advice. Of West Sacramento, the environmental report concludes, “This impact is considered significant and unavoidable.” In other words, walk.