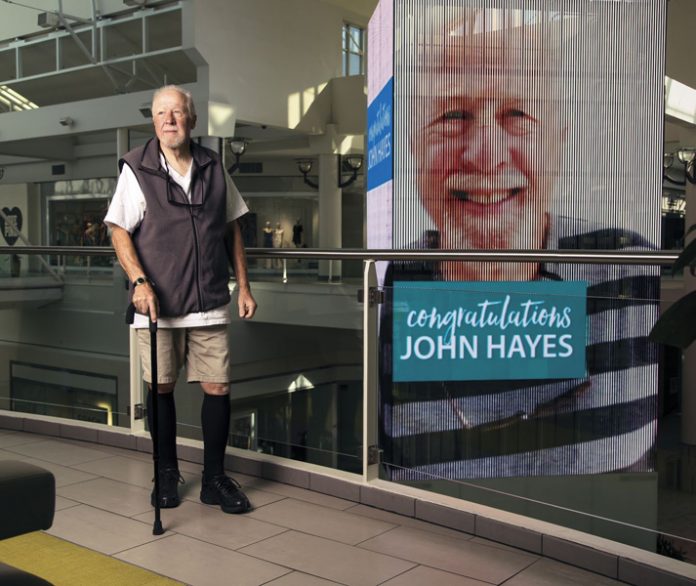 I met John Hayes in March at one of my son’s first baseball practices. He approached me, wearing a baseball cap like the 8-year-old kids on the team, and asked which kid was mine. “The one who’s just learning to throw,” I laughed. This was his grandson Collin’s first season, too.

We bonded, talking about playing catch with our fathers and our kids and sharing our nostalgia for the sport: how I went with my dad to games at Candlestick, how he suffered so many years as a fan of both the Red Sox and the Cubs. We smiled at the kids while they played the most beautiful and familiar game we will ever know.

John and I didn’t speak at length again until after the season ended in June, at a park where the team’s coaches handed out trophies to the players. Baseball may be timeless, but we are not: John now carried a cane.

A couple of years ago, John, 74, and his wife moved to Sacramento from the East Coast to be closer to their grandchildren. But John had developed peripheral artery disease, which limited his movement. He wanted to kick the ball around, play catch, be a present grandfather, so he started walking, a common treatment for the disease. But just walking wasn’t enough. John decided to walk around the world.

So what exactly does it look like to “walk around the world”? How many miles are we talking?
My first goal was to walk the circumference of the Earth going through Sacramento, which I calculated to be 19,577 miles at the latitude.

A lot of people might find that distance a little long. Why not just walk a couple miles a day like a normal person?
All the doctors, including my son-in-law, said the way to get rid of peripheral artery disease is to walk. So I started to walk so that I could run. I began Jan. 16, 2013. About a year later, I got an email from my best man about a guy who walked around the world. But it took him 27 years because he walked 700 miles a year. By that time, I was 5,000 or 6,000 miles in, so I said to myself, I can do this in four years. My friend just laughed.

How many a miles a day did you have to log, and where did you walk?
I live a block from Arden Fair, so I’d walk to the mall, have a cup of coffee, have something for breakfast, and start walking. Usually I’d walk 11 or 12 miles. At night, I’d walk the rest inside my apartment complex or outside on the grounds. When I walked the first 19,000 miles, I averaged about 15 miles a day. And in the last period, I was walking 20 miles a day for the last six months. It’s a lot of walking.

But hadn’t you really already met your goal: to get healthy enough to play with your grandkids?
Yeah, I felt great. I walked for 1,550 straight days. I lost significant weight. My heart rate and pulse were good. I stopped taking blood pressure medicine because I didn’t need it. I wasn’t just good; I was excellent. I was playing catch, kicking the ball around. It was perfect.

When I met you in March, were you anywhere close to finishing?
My goal was around March 30 or April 1. I would sometimes walk with my grandkids. It was a ball. We’d talk the entire way, stop at certain stores. Then one day I said, “I can’t walk anymore. I’m running out of breath.” I just couldn’t catch my breath. There was no pain, nothing else. And it took me until April 15 to reach my goal.

What happened?
I’m a Type 1 diabetic, and have been since 1969. They checked my blood count to make sure my kidneys were all right. I didn’t know what it was. I thought it could have been my heart. On May 9, I wasn’t feeling any better so my nephrologist put me in the ER. They did a blood draw and told me I had ALL, acute lymphoblastic leukemia. I was given six months to live.

That must have felt like the worst of ironies. How did you handle that news?
I said to myself, like most people would, “Oh, shit.” But then I thought about it and said, “Look, I accept it.” Right away. There’s nothing I can do. Something went wrong with my DNA. My chromosomes screwed up. There are seven stages of grief, but I didn’t go through any of those.

That sounds extremely stoic of you, but you also don’t seem like you’re giving in.
Even with this diagnosis, I want to be positive. I want to show people the way you should die, to let people know to lead the best life between now and then. We have to do the opposite of tiptoeing around death—be upfront with it, face it—because it’s inevitable. You will save yourself stress of worrying what is going to happen.

How has your family, for whom you moved to Sacramento, handled the news?
Well, they’re following my lead. I’ve told them this will be a positive thing, and the grandkids are involved. I want to go out on top. I don’t want to go out feeling badly about it because that’s a waste of energy.

Do you have a bucket list? Some people in your position might say, “I want to see the next Christmas, or my grandkids graduate, get married.” Have you felt this way?
No. We are going on family vacation, so I guess one of my goals is to feel well enough to do that. But the lesson I’ve learned is that you never know when something like this is going to happen. I take this as fortunate because I can deal with everything I have to deal with now. I have time to prepare.

I’m sure you have time to think about the advice you’d give to somebody else in a similar situation. What would that be?
You can do what you want to do. I set a goal that was outrageous, but I did it. I lost weight, I was in shape and I could play with my grandkids. But now my goal is to have a good, loving time with my family and friends. Sure, this is bad news, but I’m a Red Sox fan and a Cubs fan, so at least I’ve made it. That was suffering.