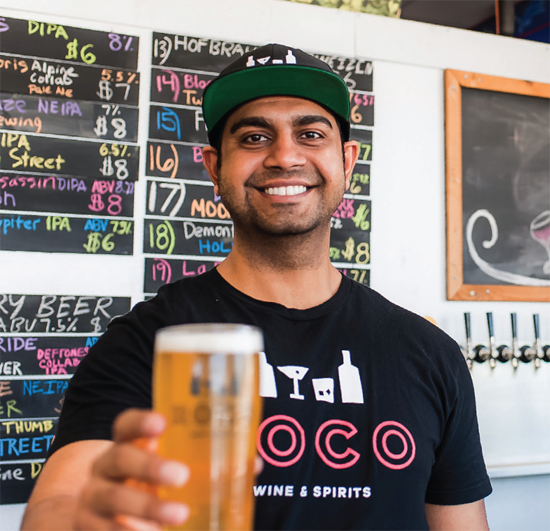 When Ro Nayyar opened RoCo Wine & Spirits in West Sacramento nine years ago, Sacramento’s craft beer scene was blossoming. Quick to spot a trend and capitalize on it, Nayyar convinced his father—who is also his business partner and a longtime liquor store owner—that it made good business sense to cater to the craft beer crowd. The bet paid off, and RoCo is today considered one of the Sacramento area’s best sources for rare and unique craft beers.

We spoke with Nayyar recently about how the region’s beverage scene has evolved over the last decade, what it took to convert Bud drinkers and where the zeitgeist will take his business next.

How has your business evolved over the past nine years?
When we first opened, we thought we were just going to be a traditional liquor store. We were way more wine focused in the beginning. As trends were changing toward craft beer, we moved in that direction. Now, we’re becoming known in Sacramento for our whiskey, and that’s because the craft beer folks that we were serving eight or nine years ago are earning more money and their palates are maturing.

How did you convince your father that focusing on craft beer would be good for business?
It was an uphill battle because he comes from the old-school way of doing things. The business has become more hands-on because everyone wants to come in and nerd out about the beer and whiskeys. It used to be so much simpler: People came in and bought the brand they wanted. He’s surprised that people are so into all these things.

How has the addition of the taproom changed the way you interact with customers?
The taproom was big for us. Now, when people come in, you get to sit there and have a conversation with them. You’re building relationships. It’s different than buying something in two minutes and then leaving. Craft beer changed the whole liquor store image for us. A decade ago, the feeling was “I don’t want to be seen in a liquor store.” Now, people take pictures of themselves buying beer here.

Was there a particular beer or brewery that made you a believer in craft beer?
It was Knee Deep Brewing Company. When they first started, that was a big game changer for me. It was one of the first local breweries that got national recognition. I always have a Knee Deep beer on tap at the taproom. They are really close to my heart.