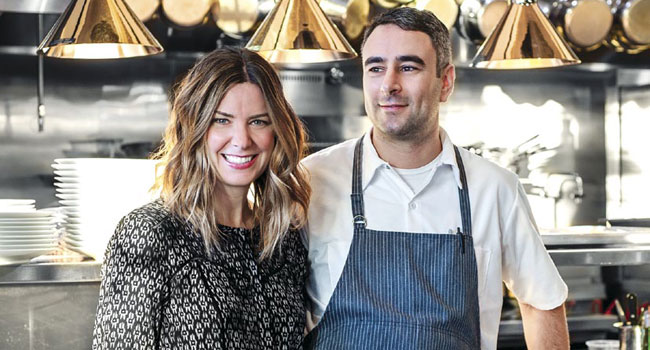 We city folk like to tell ourselves that the suburbs have nothing on us when it comes to sophistication. Then Michael Fagnoni and Molly Hawks come along to show us otherwise.

The husband-and-wife owners of Hawks in Granite Bay recently opened their second restaurant, a casual gastropub called Hawks Provisions & Public House, on the eastern edge of Sacramento’s midtown. For Sacramento, a city that can’t seem to get its fill of pizzerias and beer halls, it’s a whole other tier of casual. Ciccioli (pork terrine) with sour cherry mostarda, and liverwurst with frisee and apple

Fagnoni and Hawks met while working at The Village Pub in Woodside and opened Hawks in 2007. It was (and still is) a San Francisco-style restaurant, with exquisite food, impeccable service and understated yet luxurious design—white-tablecloth dining all the way. By those standards, the new midtown Hawks is definitely casual. The floors are cement, the ceiling covered in rustic shiplap. The wood tables are naked. The chairs are classic wood-and-metal bistro seats. Servers wear jeans and aprons. Led Zeppelin and Ol’ Dirty Bastard play on the sound system. But here and there you’ll find a few hints of Hawksian elegance: thick, snowy-white napkins folded just so, tables set with sparkling glassware. (Some staffer is doing a lot of work polishing those glasses after they come out of the dishwasher.) Two long banquettes are upholstered in mohair. Fagnoni and Hawks designed the food to be rustic, with a heavy concentration on Mediterranean flavors. The deceptively simple menu features dishes like country pate, kale Caesar salad and baked rigatoni with pork meatballs. But a deeper dive uncovers a distinctly uncasual level of execution. The kale Caesar comes with a six-minute egg dredged in bread crumbs and deep-fried, so it’s crispy on the outside, soft and gooey on the inside. For the steak tartare, hand-cut Wagyu beef gets dressed with tiny shavings of egg yolk that’s been cured in salt and sugar. The cracker that accompanies the tartare is made in-house from Lundberg brown rice that’s first cooked, then pureed, then dehydrated and finally fried until it’s like a crackling. All the pastas are made in-house. Baked rigatoni—an earthy dish that comes to the table in a cazuela—features house-made pasta tubes, fresh mozzarella and a delicately crunchy garnish of crushed croutons and fennel pollen. Grilled chicken is served on a bed of wild rice “polenta”: The raw rice is finely ground, then cooked polenta style to a smooth, porridgey consistency. Not even the burger is phoned in. The beef is ground (twice) in the walk-in fridge so it stays cold and firm. (Again, give it up for the poor staffer who suffered for your pleasure.) It’s served on a house-made brioche bun with hand-cut French fries. “We do everything we can to make the food special,” says Fagnoni. That level of attention also applies at the bar, which makes its own tinctures, syrups and juices for the craft cocktails.

The restaurant—aka the “public house”—will soon be joined by a shop next door selling coffee, pastries, sandwiches and other quick fare—the “provisions” part of the name. “Between the two spaces, we wanted to offer something for everyone,” explains Hawks, who gave birth to the couple’s third child just four months before the restaurant opened. Growing their family while growing their business has been a little crazy, she admits. “Three kids and two restaurants: It’s a bit of a challenge.”