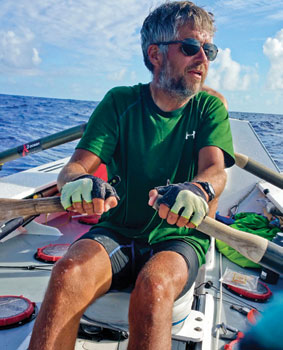 That was the common reaction when I told family, friends and colleagues about my plan to row 2,400 miles from Monterey to Honolulu this past summer. It was hard for me to disagree. I had volunteered to expend two years of vacation time from my job with the California Air Resources Board and a fair sum of money to spend 60 days at sea with no motor, no sail, no galley, no shower, no head (toilet), and no place to stand up, let alone walk, for more than a few minutes a day. There would be no support boat, except in the direst emergency, and only minimal communication with the terrestrial world. Nothing but a boat to row.

And row I did, 12 to 15 hours a day, for 48 days. As part of the biennial Great Pacific Race, I launched from Monterey Harbor June 4. I had spent a year on conditioning but only 10 days training with the expedition realities: three adventure- minded crewmates, a 24-foot boat named Isabel, VHF radio, satellite phone, GPS navigation system, a water desalinating pump, survival gear and a 60-day supply of high-energy food. On paper, this did not seem much more challenging than several three-week whitewater expeditions I had led through the Grand Canyon in the ’80s and ’90s. However, at age 60, I was the oldest man to attempt a row that had been previously completed by only 23 people—most of them in their 30s.

Not far out of the serenity of Monterey Bay, the Pacific Ocean began to test us and the other seven crews in the race. Stormgray skies, temperatures in the 50s, wind and pummeling waves pushed us down the California coast even as we fought to break away from the continental shelf into open ocean. In the wee hours of Day 8, a massive wave crashed over our boat, smashing teammate Tina Neill’s shoulder against the deck. Unable to row, Tina was evacuated three days later on a rescue boat that we were ordered to wait for, effectively eliminating us from the formal race competition. Reduced to a team of three—38-yearold veteran rower Tim Spiteri of Melbourne, Australia, 24-year-old Irishman Brian Conville and I—we pressed on, rowing in pairs, three hours per shift for each two hours of rest, around the clock. Things could have been much worse. The storm that delayed us had completely disabled two other boats and crews, forcing them to withdraw. By the second week, I began to ease into the routine and truly sense the feel of the open ocean. Skies cleared, turning the sea the deep blue for which our team, Moana Uli, was named. Air and water temperatures rose into the 70s and then the 80s. We rowed through choppy seas, roller-coaster waves, long ranks of swells four stories high, and across calm, glassy expanses as flat and smooth as dry lake beds. At night, the stars emerged—all of them, stretching to the horizon over the fullest imaginable expanse of sky. The moon cycle became as familiar and reliable as a clock for gauging the lengths of our night shifts rowing and sleeping. For weeks, I paid no attention to the time of day, day of the week, calendar date or our number of days at sea. Time was marked simply by the unceasing stroke of the oars, rowing, eating, sleeping, rowing some more.

Sitting mere inches above sea level for 48 consecutive days, I often felt that bronco riding would have been as useful for training as the 600 hours I had logged on my erg rower. We faced rough, confused seas with biting headwinds and brutal waves crashing unpredictably from every direction (more unnerving in pitch darkness). There were hours of torrential squalls and moments of near-capsize in broaching waves. The open sea, like all of nature, is indifferent to human courage and fear, strength and weakness, passions and aspirations. It is as cruel as any desert, yet ever-changing. It is tender, merciless and so indescribably beautiful it sooner or later brings all rowers to their knees, to tears of joy and humility.

We endured the daily aches and pains of endurance rowing, of salt sores and just too much damn sitting. I dutifully consumed 6,000 calories a day of dehydrated entrees, oatmeal, granola, dried fruits, energy bars and trail mix, and I still managed to lose 15 pounds. But daily trials were always overwhelmed by some new and spontaneous grandeur of the Pacific: an occasional pod of surfing dolphins, schools of tropical mahi-mahi, flying fish as thick as locusts, tenacious and comical sea birds, tiny crabs, a random baguette-sized squid flopping around on deck, the heartbreaking beauty of sunrises and sunsets, and the songs and stories and laughter shared by men whose common goal to row an ocean brought them together in deeper ways.

The Hawaiian Islands have been my home away from home for years, but I have never been more delighted to see them than I was at daybreak on July 22, Day 48, when the distant peaks of the Big Island, then Molokai, and finally Oahu appeared through the morning mist. By oar boat, our approach evoked the image of primeval islands portrayed in films like “Jurassic Park” and “King Kong.” At twilight, we crossed the Molokai Channel and landed in Waikiki to a warm welcome from friends, relatives and dozens of respectful yachtsmen and women from the surrounding harbor.

I am changed in ways I still don’t fully know. It took a month to regain my land legs. The red pockmarks from sea salt have faded, blisters have healed, calluses softened and thinned. Tendonitis in both hands, which rendered me unable to grip a beer bottle in Waikiki, has subsided. I am preparing for a less rigorous challenge, a whitewater trip with my daughter and son. It seems doable.

But from my perspective now, ocean rowing is not a race or even a sport at all. It’s a call to therapy for courageous, aching and wandering souls. It is a surreal mix of mind-bending fatigue and bewildering wonder, of laughing at our utter cosmic insignificance and worshipping our spiritual oneness at the same time, and with each stroke of the oars. It is the long way home.