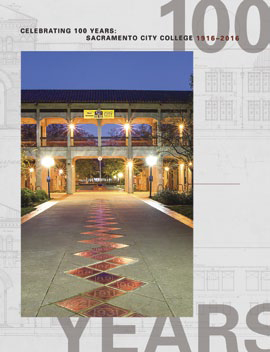 The book runs decade by decade, delving into the figures behind major moments in the college’s history, and expands on the details. Some highlights: the formation of Gregory Kondos Gallery (first known as the Little Gallery) in the 1930s, the creation of the Black Student Union in 1968 and the opening of the Regional Transit light rail stop near Hughes Stadium. Black-and-white photos accompany the stories, and a timeline tracks the evolution of the college with what was going on in both Sacramento and the nation at the time. This parallel perspective allows the reader insight into the influence of broader history on the local level, such as how the college offered a course in agricultural depression and farm relief during the Great Depression or how its attendance was profoundly impacted by losing 400 students to military duty and another 10 percent to internment during World War II.

With such a rich history to cover, it’s no surprise that the creation of the work took 14 years to finish, according to its editor, Jan Haag, who worked with co-editor Ann Love, graphic designer Missy Anapolsky and a number of others to create the book. After years of in-depth research, scouring archives and conducting interviews, Haag is overjoyed to see her passion project come to life.

“My favorite part was the research,” Haag says. “I feel like I got to know the people I was writing about just through things that we found in the archive.”