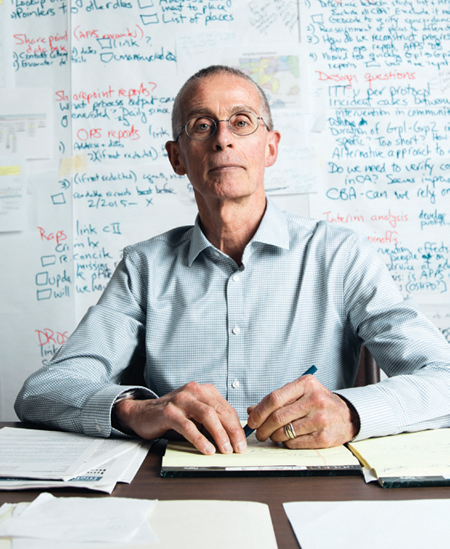 California is known for its bold leadership on issues of national importance, and gun violence is no exception. The country’s first publicly funded center devoted to the study of gun violence, the University of California Firearm Violence Research Center, was launched last summer at the UC Davis Medical Center campus thanks to a $5 million appropriation from the state and the tenacity of the center’s director, Dr. Garen Wintemute.

An emergency room physician and expert in the epidemiology of gun violence, Wintemute has spent the past 35 years studying the topic through the lens of public health. His findings have had a major influence on public policy, and his dedication to the subject is unmatched. Wintemute has risked his personal safety to go undercover at dozens of gun shows in order to better understand the behaviors of gun buyers, and he has given more than $1 million of his own money to keep his research going when other funding sources dried up.

Wintemute is one of the few full-time researchers in the country devoted to understanding the underlying causes of fi rearm violence and how to prevent it. “It is a major public health problem. We have close to 3,000 deaths a year in California and more than 30,000 annually in the United States,” says Wintemute. “But very little research is done on the problem, in part because there’s been very, very little federal support for that research.” Since 1996, Congress has denied the Centers for Disease Control and Prevention funding for any study that could be used to advocate gun control—a move that many believe has profoundly stunted scientific understanding of the issue.

While the new center’s studies are expected to inform the national conversation on firearm violence, Wintemute says that he and his colleagues aren’t interested in weighing in on the politics surrounding the issue. “We are going to stay very closely focused on research,” he explains. “I personally am often accused of having a political agenda. I don’t. I’m driven by the data. What we will do is talk about the science and talk about what we think the science means for policy and prevention.”

Wintemute asserts that fi rearm violence is not committed at random, and “just like cancer or heart disease or motor vehicle crashes . . . there are things that we can do through understanding the problem that will help us prevent it.” Some of the center’s current research focuses on the role that alcohol abuse plays in firearm violence. “Among those who buy handguns legally in California, those with a history of alcohol abuse are about four times as likely as those who don’t have a history [of alcohol abuse] to commit a violent crime,” explains Wintemute.

With mass shootings and other gun violence landing in the headlines with startling regularity, Wintemute says he is often asked if he feels like giving up out of frustration. “My response to that is that things could be much worse than they are.” He believes that “a sea change has occurred” whereby mass shootings have “left everybody feeling at risk” and that “we are for the first time a society where just about everybody agrees that something needs to be done. So I’m actually quite optimistic.” And so his research continues.