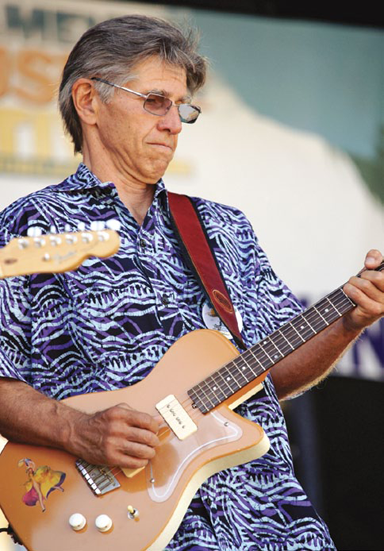 From the halls of Tower Records, where he worked for nearly three decades, to the Sacramento Blues Hall of Fame, Ray “Catfish” Copeland has been a staple of the Sacramento blues scene since 1968.

“Playing music—I can’t imagine anything better to do,” says Copeland.

His musical education started in the late 1950s, when his dad turned him on to records by guitarist Chet Atkins, Elvis, Jerry Lee Lewis and Little Richard. In the 1960s, he turned to the sounds of The Beatles, The Rolling Stones and Bob Dylan, and by 18 he was spending nearly every weekend watching bands at The Fillmore in San Francisco.

Upon moving to Sacramento in ’68, Copeland had gigs with Little Charlie and the Nightcats and The Nate Shiner Blues Band. After backing up legends such as Floyd Dixon and Big Mama Thornton, Copeland formed his first band, The Blue Flames, in 1980. The band played seven Sacramento Blues Festivals before Copeland went on to form Catfish and The Crawdaddies in 1995.

Ready for a change, Copeland created his self-named outfit in 2013, based on “all the music that influenced me in my early days— all the rock type of stuff. My new band is sort of a broader vision,” Copeland adds. “Everything I do has a blues flavor to it. I like to rearrange or, as a friend calls it, re-imagine.”

The band—guitarist Steve Randall, Grammy winner Jeff Minnieweather on drums, bassist R.W. Grigsby and vocalist Marilyn Woods— recorded its debut album, “Got Love If You Want,” in 2013 in what Copeland calls “two days in the process of spontaneous creation.” The new record includes songs by his three ’60s-era influences, spiked with a Copeland-Americana twist. He is particularly fond of the “Love Me Do” cover, a seven-and-a-half-minute arrangement with an African guitar influence.