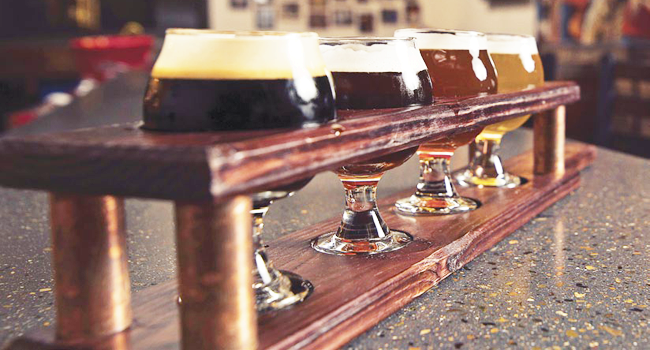 What does it take to convince a fellow to uproot from a comfortable beach-town life and relocate to an arid, unfamiliar city 100 miles inland? For Michael Barker, brewmaster at Sactown Union Brewery, it was the lure of making great craft beer for a grateful audience.

Barker, a 20-year veteran of the beer industry, had been working at Santa Cruz Ale Works when he met one of his now business partners, Quinn Gardner, at a beer event in Santa Cruz. Within days, Gardner and Barker were hatching plans to open a brewery together with a third partner, Ken Reiff. After much deliberation about where to locate the business, the capital city ultimately won out.

As Barker sees it, Sacramento is a great market for craft beer, as evidenced by the spate of taprooms opening around the region. “There’s room for a lot more breweries in the city,” he says. “In all my years of brewing, I have always said that there should be a good brewery in every neighborhood of the city you live in.”

Beer geeks have been flocking to Sactown Union, located in an industrial section of East Sacramento, since it opened in February. Customers give high marks to the German-style kolsch (a specialty of Barker’s) and The Catalyst, which originated from a recipe the owners discovered in the city’s historical archives. “It comes from the Union Brewery that used to exist here in the 1800s,” says Barker.

In the taproom, an imposing mural by local artist Shaun Burner depicts both local landmarks and iconic civil rights leaders. It’s a fitting image for an establishment where activism and community building are part of the business plan. The brewery donates a portion of its proceeds to philanthropic causes, including Sacramento Food Bank and Family Services and Firefighters Burn Institute.

Barker and his partners view the brewery as a path to making Sacramento a better place to live, and they’re not shy about proclaiming their mission. Beer glasses are imprinted with the brewery’s ethos: “We’re not just brewing beer, we’re brewing community.”

Like a neighborhood bar, Sactown Union functions like a community living room. The taproom and patio are convivial spaces where visitors can relish a lazy afternoon, converse with friends and bump into neighbors. The brewery also hosts free movie screenings on Sunday afternoons and plans to sponsor a homebrew competition for local hobbyists.