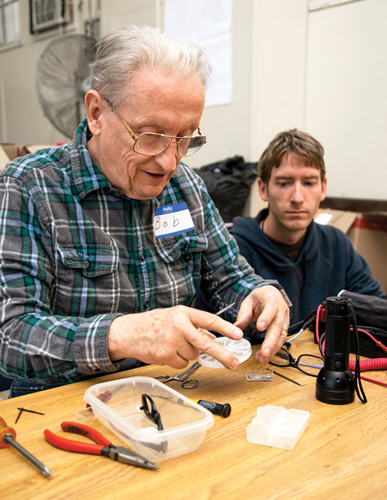 Neighbors helping neighbors. That’s the basic premise behind Oak Park Fix-it Cafe, a monthly gathering where residents can get their broken vacuum cleaner repaired or learn to sew from a fellow neighbor, all for free.

The idea for the fix-it cafe originated from online discussions among community members. “Quite a few neighbors were talking about wanting to have a community space where people could get together to share things and teach things,” says co-organizer Sam Greenlee. “We had been talking and dreaming about it for a year. It was very much community-driven from the beginning.”

The all-volunteer gathering, which launched in June, takes place at Oak Park United Methodist Church. Greenlee, who worked with fellow residents Jarrod Fischer and RosaLee Smithers Hagstrom to get the endeavor off the ground, has been heartened by the response thus far. Victoria Ngo teaches another Fix-it Cafe volunteer how to sew.

“It’s gone surprisingly well for something that doesn’t have a budget or a formal structure,” says Greenlee, who lives in Oak Park with his wife and young daughter. “People have really gotten the idea that it’s a place to be neighborly, where you can give help or get help, where everybody has something to contribute.”

On a recent Saturday, neighbors brought in bicycles, electric fans and other household items for repair while children had their faces painted and locals caught up with one another. Neil Thomson, a general contractor and Oak Park resident who volunteers his time to fix bicycles at the cafe, estimates that he and fellow volunteers have repaired at least 15 bikes since the effort began.

“I like to see people with bikes, and this is a good place to help people keep their bike going,” says Thomson. “I never want anyone to not ride their bike because it’s broken or because they don’t have one, because those are such easy problems to solve.” Thomas Cookson (left) works on the front brake of a bike while Neil Thomson tends to the chain.

Greenlee believes the cafe’s inclusivity is one reason for its success. “It’s designed to be a place where everyone really is welcome and wanted, and everyone can play a role in it,” explains Greenlee. “We have had a couple of neighbors who are unhoused come in to have their bikes repaired and then get really involved in helping other people while they were there.”

For Greenlee and others, the fix-it cafe is about something bigger than repairing stuff; it’s about bringing neighbors together. “People are connecting because they’re working side by side on something,” he says. “I’ve never been in a community like Oak Park where people are willing to act like a community to one another, to be generous with their time and care about their most vulnerable neighbors.”