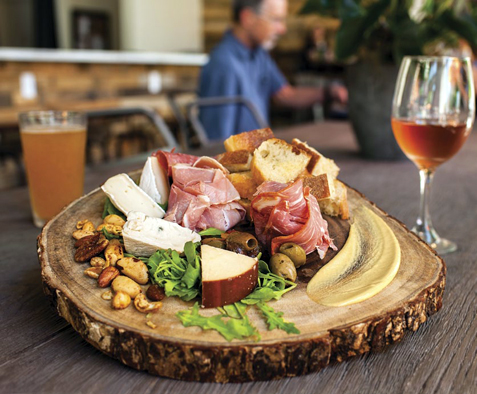 THINGS ARE BUZZING IN West Sacramento’s Washington District, thanks to a new coffee shop/wine bar that opened there in February. Bean & Barrel, at Third and C streets across from the old firehouse (now home to Burgers and Brew), is a welcome addition to this up-and-coming neighborhood that until recently had no place where locals could grab an espresso on the way to work or a glass of wine at day’s end.

Owner Sandra Doumit said that for years she and her fiance eyed the vacant storefront on the ground floor of an apartment building, dreaming of its potential. “We would always look at this space and say to ourselves that it would make a great place for a coffee shop where the neighbors could get together and hang out.” Now that Bean & Barrel is there, that’s exactly what they’re doing. Customers have told her they’re thankful to have a gathering spot near their home, and several of the employees live just steps away.

Bean & Barrel serves coffee, wine and beer seven days a week. The beans come from Camellia Coffee Roasters in Sacramento; many of the wines and beers are local, too. The place hosts a happy hour on weekdays from 3:30 to 6:30 p.m. and wine tastings every Wednesday night. Mondays and Fridays are $1 oyster nights.

Executive chef Janine Villalobos has assembled a smartly curated menu of all-day items that pair nicely with the beverage side of the menu. “We’ve kept it simple and short so people aren’t too overwhelmed,” says Doumit.

Standouts include a selection of savory toasts—open-face sandwiches with toppings like eggs and bacon or lox and cream cheese—that make for a nice light meal. “We saw them in LA and in London and thought it was a great idea,” says Doumit. Bean & Barrel also serves cheese and cured-meat boards, sandwiches, salads and nibbles like salted nuts and olives for those who want just a little something to accompany their chardonnay. Fresh-baked bread and pastries are supplied daily by Grateful Bread.

Opening a new eatery in an unproven location is a risk, but Doumit is optimistic about Bean & Barrel’s potential. “Because we are just across the river from downtown and close to the Golden 1 Center, you can grab a bite without having to deal with the craziness of downtown,” says Doumit. “We’ve got a great little neighborhood here with a great group of people who live in it. We wanted to give West Sac a different feel, and I think we have.”