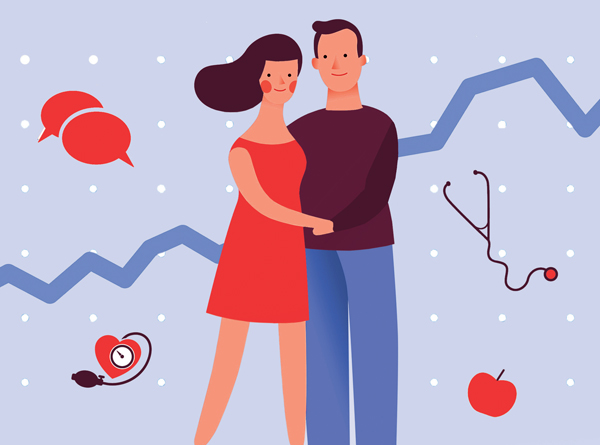 The way Jennifer remembers it, they had 14 good years and three bad ones. They’d met at 25, married at 27 and had their first child at 30. “I loved being married. It was like being married to my best friend,” she says. That easy dynamic changed, however, when they moved to Southern California. His new job was more stressful and time-consuming than expected. She struggled to find work and felt alone in an unfamiliar city. “For the first time, instead of leaning on each other, we started to lean away,” she says. The daily friction wore on her emotionally and physically. She lost weight and rarely got a good night’s sleep.

Ric and his wife fell in love fresh out of college. They’d just arrived in Hawaii for Peace Corps training before heading out to American Samoa. After knowing each other less than two weeks, they made a drastic decision. “We had to pretend to be married in order to get assigned to the same quarters,” he says. After their assignment was over, they got married for real back in the States. But while tending to career and children, they increasingly struggled with misaligned communication and expectations. Resentments lingered long after an argument was over.

Both couples eventually sought the help of marriage counselors. Jennifer’s union didn’t make it. Ric’s did. Though it took several years of effort, they regained their footing with the help of some communication tools.

You just never know. “Happily ever after,” goes the storybook version. But even our wedding vows, taken at the moment of peak optimism, acknowledge a commitment that extends beyond fair weather. “For better or for worse, in sickness and in health” is a big promise, which we undertake because it often pays off. A marriage confers benefits ranging from shared labor to familial stability.

Many have studied this possibility, comparing medical data to marital status. At a glance, it would seem wedlock is amazingly good for you. Married people are 14 percent more likely than singles to survive a heart attack and be discharged early from the hospital. They are more likely to survive cancer. Less likely to suffer a stroke. Less likely to develop depression and other mental illnesses.

Married people with “modifiable risk factors” such as type 2 diabetes and high blood pressure also have significantly lower mortality rates than single people with the same conditions. However, one of coupling’s few health-related drawbacks will come as a shock to no one: Marriage is associated with increased risk of weight gain. Chubby hubbies notwithstanding, married people have a longer expected life span, too.

Those who insist marriage is just a piece of paper will be glad to hear that nonmarital cohabitation appears to offer similar benefits.

There are many plausible explanations for the marital health bump. It generally comes down to the idea you’re better off on a team than on your own. Spouses encourage better habits in their better halves. They provide support in times of need. Married people are more likely to have health insurance and less likely to engage in risky behavior such as substance abuse or reckless driving. On good days, they enjoy societal approval and recognition. And on really bad days, they’re more likely to have someone nearby to call 911.

One interesting psychological theory is that marriage acts as a defense against stress. Carnegie Mellon researchers determined that married people have lower levels of the stress hormone cortisol than nonmarried and previously married people. High cortisol levels cause inflammation, which in turn elevates the risk of problems such as heart disease, autoimmune conditions and depression. Married people also have faster declines in cortisol levels, meaning their bodies essentially get over stress faster.

However, don’t go canceling your life insurance policy just yet. The benefits are not evenly distributed. Ladies, you’ll be thrilled to find this is one more area men get more out of than you do. That may be partly because men leaving bachelorhood tend to level up in their health habits. The American Sociological Association found males tend to drink less alcohol after getting hitched and females tend to drink more. (Interestingly, drinking with recent divorcees went the opposite way: Men’s spiked and women’s tanked.) And while there is no known study linking Big Mac consumption to bachelorhood, it stands to reason married men might eat more homemade meals than their single buddies.

However, the biggest reality check is that you can kiss all those benefits goodbye if your marriage stinks. Instead of lowering your cortisol levels, a stressful union can put you in permanent fight-or-flight mode. It can bruise your well-being as surely as smoking or a sedentary lifestyle.

Rectifying a troubled marriage isn’t easy, but with so much on the line, many seek the help of a professional.

Jennifer Thomas, Psy.D., M.S., is director of Clinical-Behavioral Health Services and the chief psychologist at Sutter Center for Psychiatry. She says that if your relationship is in trouble, don’t wait to get help. “Most people don’t seek counseling until their relationship is in serious jeopardy,” says Thomas. Couples often have the same question on their mind: “Can counseling save my marriage?” The answer to that depends a lot on several factors.

First, both parties must actually want to save the marriage. About 38 percent of couples get divorced within four years of completing therapy. That doesn’t necessarily mean therapy failed them. Some go to counseling just to say that they tried. Others resist altogether.

It is common for one spouse experiencing emotional difficulties to want marriage counseling while the other does not. When this happens, Thomas generally recommends going it alone. “Sometimes it can make a huge difference in the future of a marriage. We all have work to do on ourselves. We teach people how to interact better with friends, family and partners. That alone may help. And when a spouse sees change, they sometimes also become interested,” she says.

Time is also a key factor. Experts agree that troubled marriages have a kind of expiration date before they go irreversibly bad. If you’ve been at each other’s throats for more than six years or so, that level of toxicity is very difficult to overcome.

One of the biggest factors in the success of marriage counseling is the counselor—and finding a good one isn’t as easy as you might think. “It’s one of the harder therapies to deal with,” says Thomas, observing that the therapist doesn’t have one specific client but two with common issues and divergent feelings. Many therapists offer marriage counseling, but it’s best to find one who specializes in it. Thomas recommends doing some online sleuthing first. Psychologytoday.com has a “Find a Therapist” search that allows you to narrow results by specialty. But don’t make your decision based solely on someone’s website description. It’s a big decision, so engage the therapist. Not sure what to ask? Thomas says, “Ask what is your background? What training have you taken? How long have you been practicing? How many couples have you seen? See if they’re using a kind of treatment that is well-respected. If they give you vague answers, I would shy away.”

Another strong recommendation is to make sure you feel comfortable with your therapist. Both couples introduced at the beginning of this story dumped their first therapists. In Jennifer’s case, the first was given to mansplaining and unwelcome comments about her appearance. Their second was a woman who put both Jen and her husband at ease. In Ric’s case, their first therapist was too regimented in managing the dialogue. (“Too Germanic,” in his words.) Their second offered a more conversational approach that worked better for both.

Once all parties are ready and willing, the real work begins. Thomas notes one important goal of therapy is to help couples counteract “The Four Horsemen of the Apocalypse.” That charming dysphemism comes from The Gottman Institute, where Drs. John Gottman and Julie Schwartz Gottman have earned a reputation as the Masters and Johnson of marriage studies. Through decades of research, they have identified four negative behavior patterns that can lead to the end of a relationship. The Four Horsemen are criticism, contempt, defensiveness and stonewalling.

Criticism attacks the character of the recipient instead of focusing on a specific behavior. One fix is to use “I statements” such as “I was scared when you ran late and didn’t call me,” instead of “You never think about how your behavior affects other people.”

Contempt assumes a position of moral superiority. It could appear as mockery, sarcasm, name calling, eye rolling or hostile humor. Contempt is the single greatest predictor of divorce. The antidote is to treat each other with respect and build a culture of appreciation.

Defensiveness is self-protection from feeling unjustly accused, expressed by blaming one’s partner for personal failures. The remedy is to accept responsibility, even if only for part of the conflict.

Stonewalling occurs when one person withdraws from conflict and shuts down without resolution. When things are bad, it’s a dangerously easy habit to fall into. A useful corrective is to take a 20-minute timeout, calm down, then return to the conversation.

Thomas cautions there are limits to therapy. Some problems present in a marriage are actually lifelong problems. Part of the work is learning how to meet in the middle, recognize each other’s efforts and set realistic expectations. She also believes that even though her patients must allow time for change to happen, that doesn’t mean therapy should be an everlasting process. “You should see some improvement within 8 to 20 sessions,” she says. She also acknowledges that’s a big range, but everyone’s different. Some cases are harder than others. But if you’ve gone through 20 sessions and there’s no improvement, your money might be better spent on a good attorney.