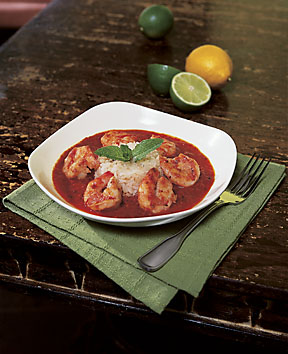 ZÃ³calo. What is it? In Mexico City, it is the great square, the heart of all festivities. In Sacramento, ZÃ³calo is one of the newer entries in the burgeoning restaurant business in midtown-or at least at 18th Street and Capitol Avenue. Restaurateur Ernesto Jimenez has created a bright, lively spot serving up authentic regional Mexican cuisine.

ZÃ³calo is large, open and loud. It is a party at all hours: lunchtime, tequila time and dinnertime.

Heather Takemori got the plush assignment of being our server. When she figured out who we were and what we were doing, she wondered if her name would be used in the magazine. “I haven’t been in print since I sold Girl Scout cookies,” she confided. Efficient and only a bit flustered, she performed her duties well, although we may have prevented her from telling us the daily special, picadillo, described as chile relleno without the breading. The special was ordered after everything else, and we had to put the desserts on hold while tasting the day’s big star, which should be on the regular menu now. Ground beef filled the roasted chile, which had the bite of chipotle, but nothing incendiary.

This is one time the Divas overdid the order-not that we had too many dishes, but the table was not large enough to accommodate everything at one time.

Most impressive for my taste buds after the picadillo was the ceviche, especially for the presentation but also for the fresh taste; the vegetarian enchiladas for the variety of textures as well as blending of flavors; and the camarones, featuring an increasingly vivid chipotle experience.

Everyone savored the desserts-seven in all, including tequila sorbet tops. They are simple enough to prepare at home: All you do is place a scoop of high-quality fruit sorbet in a margarita glass and top with tequila. It’s not for the younger set, but adults will adore you-and it. A serious discussion by tequila experts determined the brand was Sauza. Takemori confirmed the vote, noting that Sauza is the house brand.

Starring also was the three-layer chocolate cake with a fudgy frosting. My score sheet picked the churros, an elongated, deep-fried fritter; platano macho, golden pan-fried plantains that were crispy and sprinkled with brown sugar and cinnamon, served with ice cream; the Tres Leches, a white cake soaked in three types of milk and served before it becomes milk-logged but is quite sweet; flan, traditional but did not need chocolate sauce; and pastel de queso, cheesecake with a bit of fresh fruit sauce.

Joan Leineke did a sterling job in the wine department, choosing Ferrari-Carano Fum Blanc and 7 Deadly Zins Zinfandel. She called the restaurant design “fabulous,” the food “generic” and the paper napkins “strange.” For Leineke, the vegetarian enchilada was the best, with the churros the best of everything: “Both crisp and noncrisp, but tasty,” she commented, although she would have preferred a premium ice cream. Not so good: the salsa, the straight vinegar on the cabbage and the ceviche.

Tomlinson-Poswall chose camarones enchipotlados. “The prawns were very well-executed and made me think I was back in Mexico,” she commented. “Unfortunately, my last bite was ruined by the balsamic vinegar garnish. I’m confused by this garnish, as there is nothing Mexican about balsamic.” Tomlinson-Poswall also appreciated the pozole verde, especially for a rainy day. The mole was one-dimensional without the expected layers of flavor. She would like the restaurant to rethink the way plates are garnished-the beet swirls could end up staining a sleeve, and flan does not need chocolate (was it Hershey’s?) syrup.

Paulette Bruce-Miller’s first impression: “A good-looking restaurant-lively, loud and happy. I enjoyed the openness and airiness, but it was too bad about the paper napkins. This is not appropriate at a restaurant that is trying to be nice and ‘uptown.'” In the food department, Bruce-Miller picked the camarones: “I love the heat of chipotle, but get rid of the balsamic-this is not Italy, and Mexican food should not be dressed up with gringo sauces.” The special picadillo peppers scored highest in the entre department, with the mole coming in last. For dessert? Churros: “One of the top three items we had today.”

Gayla Mace has visited ZÃ³calo at night, commenting: “It’s even better at night, with great lighting, and in the summer it is wonderful with all the windows open. I love the way this restaurant looks and how it makes you feel.” Everything was really tasty, she said, with the ceviche coming in as a dish that would suffice as an entre. Mace also enjoyed the queso fundido and the vegetarian enchilada. “It was a surprise. Very flavorful.” The churros and ice cream, plus tequila sorbet, plus plantains: All were favorites in the dessert department.

For the rest of this story pick up a copy of Sacramento magazine’s July issue.