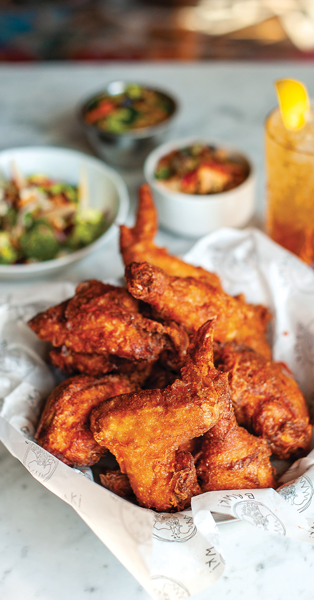 With nine restaurants between them, Josh Nelson, Tamera Baker and Rob Archie would seem to have their hands full. After their parents’ recent retirement, Nelson and Baker assumed control of Selland Family Restaurants, which includes The Kitchen, Ella, four Selland’s Market-Cafes and Obo. Archie owns Pangaea Bier Cafe and co-owns Urban Roots Brewing & Smokehouse. But that didn’t stop the trio of friends from teaming up to open Bawk!, a hip new fried chicken joint on the R Street corridor.

So when Nelson, Baker and Archie decided to jump into the chicken game, they knew they’d have to come up with something different from their competitors. They made reconnaissance missions to Los Angeles, the Bay Area and New Orleans to sample fried chicken, then spent months working to create and perfect a recipe. Their standards were lofty: The chicken had to come off the bone, have great flavor, be juicy, not dry, with a crispy skin that wouldn’t pull away from the meat when you bit into it. Oh, and it had to be consistent, every single time. “We all have a serious culinary pedigree,” says Baker, “and this fried-chicken thing was challenging.”

The end product is a bit like the American South meets Japan. The chicken is coated in a wet batter that borrows from tempura, then gets a hard fry, resulting in a sublimely crunchy shell of skin. After it comes out of the fryer, it’s sprinkled with a secret red-spice mixture that adds flavor but not heat. “Bawk! magic,” Baker calls it.

The partners created a menu of foods that go well with fried chicken, including oysters on the half shell, chilled Gulf prawns and a few side dishes—slaw, black-eyed peas and greens, elote-style corn—that satisfied Baker’s desire for something green and fresh. There’s a chicken-fried cauliflower sandwich as well, and for dessert, something old-fashioned and fun: Straus Creamery soft-soft ice cream.

What started out as a small side project for the trio turned into a bigger enterprise when they decided to get a full liquor license and serve craft cocktails (or bawktails, as they call them), along with wine and beer. Three drinks—a Hurricane, a bourbon-spiked sweet tea and a Pimm’s Cup—are made in batches and served from fountain drink dispensers, “so they’re as quick as a soda,” says Archie. With his beer background, Archie smartly curated the beer list, and Selland sommeliers chose the wines. You can order a $475 bottle of Dom Perignon to go with your $16 plate of fried chicken (slaw and a choice of side included). It’s just one example of the high-low vibe that the partners were going for.

Baker oversaw the restaurant’s interior design, which includes marble tables and a cement floor covered in graffiti done by local taggers. Local artists Jose Di Gregorio, Miles Toland and Jeremiah Kille painted murals on the walls, including a massive portrait of Mohammad Ali, his mouth wide open like a chicken bawking. “Mohammad Ali is pretty bawk,” says Nelson, using the word as an adjective that means fun, positive and expressive. In that case, Bawk! is pretty bawk, too.