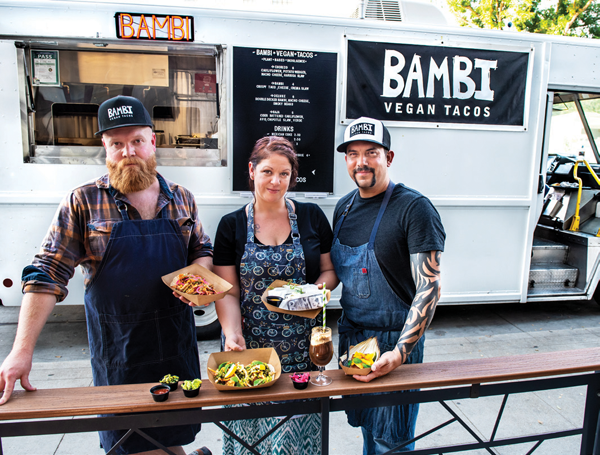 A popular food truck offers a novel take on tacos.

What do you get when a trio of talented food industry vets challenge themselves to create not just the best vegan tacos around, but the best tacos, period? Answer: Bambi Vegan Tacos, a food truck that has won over the hearts (and stomachs) of even the most tradition-bound carnivores.

The idea for Bambi was hatched by chefs Chad Novick and Ruben Castaneda, who met while working as line cooks at Mother. “We used to go out after work at Pre Flite Lounge. It was kind of the perfect little place to talk about ideas and dishes and food in general,” recalls Novick. “At first we thought we’d have an ice cream truck. Then we thought of vegan tacos. It just seemed like something that Sacramento needed.”

Novick had sampled vegan tacos at a popular joint in Los Angeles and walked away unimpressed, convinced he could do better. “I wanted to work within the confines of vegan ingredients and try to create something that’s as good as nonvegan food,” he says. “Our food is vegan, but that’s not what defines it. It’s also just a good taco.”

The menu, which they tweak depending on the fresh ingredients available to them, is short—typically just four styles of tacos—but packed with satisfying flavors and textures that, unlike a lot of vegan food, never feel like a sacrifice. “A lot of people are surprised by what you can do with just vegetables, no cheese, no butter,” says Novick.

Bambi’s Baja taco, a nod to fish tacos but made with battered-and-fried cauliflower, is a revelation. Crispy cauliflower is tucked into a soft tortilla with a chipotle slaw, then drizzled with a smoky garbanzo bean-based crema and a bright salsa verde that packs a little heat.

Mushrooms, meanwhile, are the star of the signature Bambi taco. “We cook them down to get the water out and concentrate the umami flavor, so you’re left with a real meatiness. From there, it’s just a matter of balancing the mushrooms with spices,” explains Novick. Add some tangy slaw and a crispy corn shell dusted in vegan Parmesan and you’ve got what Novick reports is their most popular taco.

Novick and Castaneda, who co-own Bambi with bartending doyenne Elizabeth Gibb, bring some serious kitchen credentials to their humble enterprise on wheels. Besides Mother, Novick also cooked at Grange with Oliver Ridgeway and Brad Cecchi. Castaneda, meanwhile, did stints at Morimoto Napa and two Thomas Keller restaurants, Bouchon and Ad Hoc, as well as Binchoyaki in Sacramento.

Even in capable hands, however, reinterpreting what a taco is can be a risky business. “I think sometimes people take it too far and they end up just throwing stuff on a tortilla and calling it a taco,” says Novick. He and his partners contend that their riff on the beloved taco is a respectful break from tradition. “I believe that cultures are meant to blend and good things always come from that. So we’re not afraid to bend that limit.”

Check the schedule at bambisvegantacos.com.