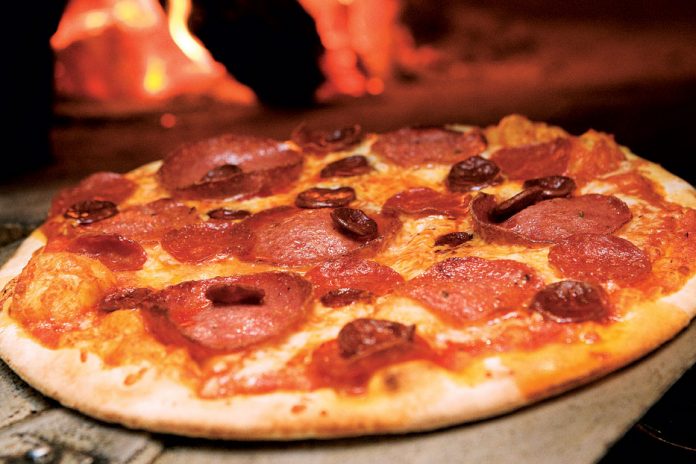 In a busy, stressful world, we all savor our little pockets of comfort. I seek out mine in food served up in a warm, friendly restaurant by people who like me (or at least pretend to) and make me feel as though their night is better because I’m part of it. It’s not easy to find such a place, which is why I’m so pleased that Adam Pechal, with partners Karl and Ulli Petersen, has opened feisty little TulÃ­ Bistro at the corner of 21st and S streets in midtown.

If cheery recognition and an attentive, upbeat atmosphere are what you’re seeking, TulÃ­ offers it in spades. A marvel of careful space design, this tiny bistro has a long granite counter that looks directly into the kitchen. Diners perch on bar stools and watch as chefs stretch pizza dough into paper-thin circles, quick-fry crusty pieces of petrale sole and carefully fluff salad greens. Behind the bar stools are two small, round tables that accommodate two people apiece. During the winter, when I visited, diners who snagged those tables were TulÃ­’s version of lottery winners&emdash;the rest of the tables are outside.

Pechal, a graduate of the Culinary Institute of America in New York, honed his cooking skills at Flying Fish in Seattle, Bouchon in Yountville and Red Sage in Washington, D.C., before returning to his native Sacramento. At TulÃ­, he cooks Italian-influenced regional cuisine with some Asian and Mediterranean touches.

TulÃ­’s lunch menu is small, featuring a housemade soup (on one visit it was gingered red lentil; on another, Southern chicken and rice) and a handful of sandwiches and salads. The Crispy Bird is a generously sized sandwich piled with slices of fried chicken breast, a creamy Serrano chile-infused ranch dressing, and lettuce, onion and tomato.

I usually despise warm, flaked tuna salad in sandwiches, but TulÃ­’s fabulous ahi tuna melt was so cleanly flavored and fresh that I was converted. I also savored the Breakfast Salad, a feathery mound of frise tossed with a sharp, elegant sherry vinaigrette and salty bits of bacon, and adorned with a warm, perfectly poached egg. The best came at the very end, when I sopped my bread in the warmish vinaigrette/yolk mixture pooled at the bottom of the plate.

TulÃ­’s eclectic, changing dinner menu ranges from bouillabaisse, loaded with diver scallops, prawns, tilapia and clams, to wild-mushroom risotto crowned with roasted Kobe beef. We ordered the petrale sole piccata on two separate occasions, it was so good. Part of its appeal was watching the chef fry the fillets, douse them with wine and lemon juice, then slip the fish effortlessly on a plate, turn heel and hand it directly to us. (There are no heat lamps at TulÃ­ Bistro; if you sit at the bar, your food goes from stovetop to mouth in less than a minute. And that makes a difference.) The crispy, pepper-flecked fish rested on deeply roasted coins of fingerling potato and sauted arugula, and it was a memorable dish indeed.

The pizzas also were terrific: thin-crusted, chewy and loaded with quality ingredients. Most popular is the Humboldt, slathered with a sprightly arugula-herb pesto and dotted with oven-dried tomatoes, niÃ§oise olives, mozzarella and goat cheese. I also liked the spicy, assertive Salumi, with salami, fiery chorizo and pepperoni on a robust fire-roasted tomato sauce.

Less impressive was the wood-roasted quail, stuffed with gummy jambalaya. The bird was undercooked, so I nibbled carefully around the raw-looking parts. However, the dish was rescued by a stellar heap of garlicky rainbow chard. This kitchen definitely knows its way around sauted greens.

After several visits, I’ve concluded that TulÃ­’s dessert list is a work in progress. Twice (both times on a Saturday night) the chocolate cookies that are the foundation of two desserts had yet to be baked, making those desserts unavailable. One evening, our orange crÃ¨me brÃ»le was beautifully caramelized, but the custard was very warm&emdash;a disappointment, since the reward of a good brÃ»le is the bracing coldness of its soft custard contrasted with the hot, crackly brittleness of its caramelized top. However, I admired the silky Grand Marnier chocolate mousse cake, and the second time I ordered the orange crÃ¨me brÃ»le, the custard was pleasingly cold, though its orange flavor was fleetingly elusive.

Pechal is still refining his menu. But what he and his staff have firmly in place is the right attitude and an obvious concern about their guests’ experiences. At the bottom of the menu is the phrase substitutions welcome. Reading that made me feel welcome, and I’ll be back the next time I need a little comfort (and food) to help me with the stresses of everyday life.

Early-bird special: Arrive before 6 p.m. if you want a seat at the counter
Bring a jacket: Outside dining at TulÃ­ can be a shivery experience
Rise and shine: The breakfast menu includes French toast with strawberry compote, a breakfast burrito, and an egg, cheddar and bacon sandwich