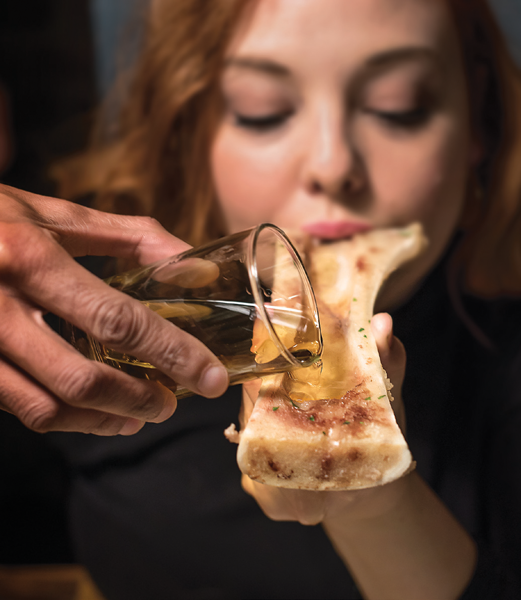 At Empress Tavern, the winners are lugers.

As if beef bone marrow weren’t a decadent enough dish, the folks at Empress Tavern have dialed things up a notch or two by adding a whiskey-shot luge to the experience. Here’s how it works: Once you’ve finished scooping out the rich marrow from the roasted femur, a waiter arrives tableside with a bottle of Jameson and pours a shot through the bone’s channel and into your mouth.

“The whiskey mixes with the fattiness of the marrow. It’s super delicious,” explains Empress’s event coordinator, Morgan Cotton. “Everyone loves the whiskey luge, even people who don’t usually take shots, because it tastes so good. We sell a ton of them to everyone—from the big guys who are eating prime ribs to the women who are having just a salad for dinner.”

If it sounds a tad uncivilized, don’t worry. Your server will offer a napkin to hold under your chin while the shot streams down the luge. And Empress isn’t a stuffy place. “We’re refined, but we’re still a tavern,” says Cotton. “We’re high end in the sense that we use good-quality ingredients and take a lot of care in the food that we present, but we’ve got a more casual environment than, say, Ella or Grange.”

In other words, slurping alcohol from a bone is perfectly acceptable here. As Cotton says, “The bone marrow tastes delicious without the whiskey, of course, but it’s a really cool touch that adds some fun and whimsy to your dinner.”