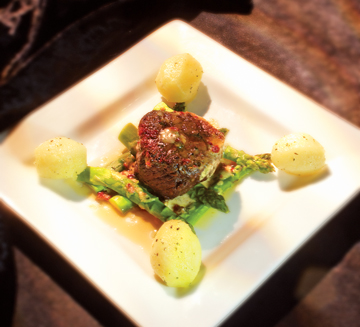 Large shopping centers in the Sacramento region can have an ubiquitous, mind-wearying similarity: Anchor stores are predictable, architectural styles are replicated from county to county, and consumers know exactly what to expect, whether they’re shopping in Roseville or Elk Grove. But every once in a while, a store or restaurant with its own unique ideas about servicing customers slips into a shopping center and changes its dynamics, making it feel more distinct and approachable.

Such is the case with The Ravine, which settled quietly into a new Raley’s shopping center in Folsom this past June. Owned by savvy restaurateurs Abby and Sarah Baradaran, recent transplants from England, The Ravine has briskly set about changing Folsom residents’ ideas of what a shopping center restaurant can be.

The Baradarans, a husband-and-wife team who are both professionally trained chefs, bring years of restaurant experience to The Ravine. This is their 11th restaurant together&emdash;they established and ran restaurants in England before their desire to live in the United States prompted them to relocate here.

At The Ravine, they focus on European cuisine, with an emphasis on French and Italian dishes. They have neatly divided the kitchen duties: Sarah, who also oversees the front of the house, is responsible for appetizers and desserts, while Abby concentrates on entres.

The appetizer list, which includes salads, has a number of impressive selections. It was exciting to find salmon cakes that were as meaty and substantial as these: They contained no bready fillers or unnecessary ingredients like bell peppers and had a crispy, appealing exterior. The cakes&emdash;fresh and robust&emdash;arrived on a cushy bed of butter lettuce, the plate prettily speckled with chopped fresh dill and parsley. The pleasing Caesar salad, large enough for two, was lightly dressed and embellished with irresistible, garlicky croutons. I also enjoyed the roasted red pepper salad, tangled with chunks of slow-roasted tomato and mixed greens and topped with silky goat cheese rounds, all drizzled with a sweet, thick balsamic dressing. Other appetizers include tuna tartare with wasabi vinaigrette and king shrimp cocktail with lime salsa and chips.

The entres are diverse and engaging, ranging from filet mignon with roasted garlic and mozzarella butter, and duck breast with hoisin plum sauce to a pan-fried pork loin chop with braised leeks. The kitchen’s talent with salmon was evident in a poached version, presented on a bed of sauted spinach, garnished with crispy-sweet sugar snap peas and jumbo shrimp and topped with a gentle white wine and saffron butter. A huge, enticing loin of lamb, marinated in garlic, parsley and chilies, was served with a honey and whole-grain mustard sauce and accompanied by a broiled tomato half crowned with browned breadcrumbs: a characteristic and comforting English touch. The hearty, satisfying roasted chicken pasta was tossed in a cheesy cream sauce, punctuated with bits of ham; and the sauted wild mushrooms&emdash;spiked with brandy and velvety-soft from the addition of heavy cream&emdash;was a delectable option for vegetarians.

The Ravine’s lunch menu is concise yet nicely varied, with homestyle pizza (baked, interestingly, on ciabatta bread), sesame chicken stir-fry and pasta marinara with shrimp, clams and mussels. There also are several sandwiches, from a tuna and mozzarella melt to a turkey club.

The Ravine offers Sunday brunch, with a compact menu of seven selections. The best thing on the menu may be the tasty bacon sirloin burger. I thoroughly enjoyed the frittata, filled with tomatoes, long strips of green bell pepper and mushrooms. Large enough to practically cover the plate, it was topped with a lovely pile of crusty, red-skinned breakfast potatoes. Toasted bagels with cream cheese and smoked salmon came with a generously sized bowl of fresh fruit&emdash;easily enough food for two people. The menu also included a banana and blueberry french toast sandwich and a bacon and brie baguette.

Food delivery was ponderously slow each time I visited, even when the restaurant wasn’t crowded. But service was gracious and attentive, and when the food did arrive, it was hot and attractively presented. Dessert in particular was worth waiting for. Something the menu calls a brownie was what today’s diners call a molten chocolate cake: a tall, fresh-from-the-oven column of cake with a semi-liquid interior that erupted sweetly at the first dig of a spoon. Perched in a pool of chocolate sauce and served with vanilla ice cream, this is one brownie I’d drive to Folsom to eat again. I was also impressed with the light and tangily refreshing lemon crÃ¨me brÃ»le, scattered with plump red raspberries.

The restaurant is uncluttered and chic, with cool beige walls, on one of which is projected a large, ghostly image of a clock. A few restrained, simple paintings adorn other walls, but the feeling is one of almost-starkness. A big, shiny chrome pillar juts up between the bar and dining area, and a handsome piano is snuggled into a far corner. One of the most dominant design features, however, is the frosted glass at the front of the restaurant, which prevents patrons from looking out on the shopping center in which the restaurant is located. It’s easy to forget you’re next door to a Raley’s grocery store, but&emdash;thanks to our good meals at The Ravine&emdash;this is one shopping center I won’t forget any time soon.

What Makes It Different: European culinary sensibilities in a Folsom grocery shopping center.
Who to Bring: Adults only. The restaurant doesn’t have a child-friendly ambiance or a kids’ menu.
A Good Reason To Visit: A romantic dinner for two&emdash;you’ll appreciate the dim lighting and sophisticated fare.
Extra: The Ravine offers live music Thursday through Saturday evenings.