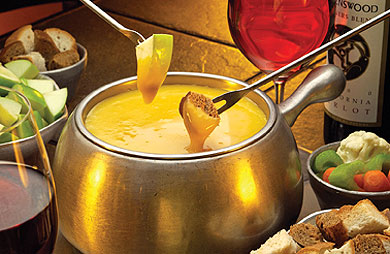 To service this growing interest, The Melting Pot (with more than 85 corporate-owned and franchise locations nationwide) recently opened its second restaurant in the region, at the back of a spanking-new shopping area in Rocklin called Blue Oaks Market Place. Open only for dinner, it is doing a brisk business even on traditionally slow Monday and Tuesday evenings.

As you enter The Melting Pot’s attractive foyer, winy, garlicky odors waft from the dining room, a fragrant testimony to the long journey fondue has made in America since your mom concocted her own recipes in a Sterno-heated pot. Here, diners cook their own meals in a fondue pot heated on a fancy magnetic-conduction element in the middle of each table.

Think fondue is all about cheese? Think again. In addition to an array of cheese fondues, The Melting Pot offers a number of options for meat eaters, the dairy-intolerant, vegetarians, even calorie counters.

Still, The Melting Pot offers five cheese fondues; most people start out their meal with one. We were crazy about the Wisconsin Trio cheese fondue, made with fontina, ButterkSse and buttermilk blue cheeses and served with slightly stale chunks of rye bread whose earthy, caraway chewiness was perfect with the fondue. The fondue also came with some visibly dried-out carrots and celery and a selection of delightfully crisp cauliflower florets and green apple slices.

The cauliflower/Wisconsin Trio pairing, interestingly, turned out to be the single best food combination we sampled at The Melting Pot. The tangy, slightly bitter cauliflower shone in duet with the sharp, creamy cheese, as did the tart-sweet apple slices. Other fondues we enjoyed (but not as much as the Wisconsin) were a delicate Swiss cheese fondue, made with Gruy’re and Emmenthal cheeses, white wine and kirschwasser (cherry brandy); and a rustic, fragrant raclette and fontina cheese fondue with porcini mushrooms and Marsala wine.

At The Melting Pot, it appears to be de rigueur to order a salad between your cheese and entre fondues, but we were unable to find one we would be comfortable recommending. The most promising from a disappointing lineup was the spinach salad, showered with blobs of pungent blue cheese, punctuated with sticky candied pecans and drenched in a balsamic vinaigrette. But it, and the other salads, came with stiff, pallid tomato slices. The chef salad’s “crisp greens” were simply a pile of iceberg lettuce, and the ham sprinkled on the lettuce was strangely soft. The mushroom salad was composed of iceberg lettuce smothered in raw mushroom slices. If I were to visit The Melting Pot again, it’s likely that I would avoid the salads completely and instead concentrate on the vegetables (broccoli, mushroom caps, yellow squash and red potatoes) accompanying the fondues.

The entre “platters” consist of chunks of food that you cook at the table. You can order a platter for two (as part of a fixed-price, multicourse meal) or individual entre platters, but you must share the cooking broth. Our favorite platter was the Signature Selection, overflowing with raw beef tenderloin, shrimp, teriyaki-marinated sirloin, boneless chicken breast and salmon. Others include the French Quarter, featuring andouille sausage and other meats sprinkled with a Cajun spice blend; Surf and Turf, with lobster and filet mignon; and a meatless option with vegetables, tofu and spinach-Gorgonzola ravioli.

Once you’ve decided on a platter, you choose your cooking medium. There are four kinds: The most flavorful is the Mojo, a garlicky, citrusy, Caribbean-seasoned broth. We also liked the Coq au Vin, the restaurant’s interpretation of a French country-style fondue. Made primarily with red wine, it features slices of mushrooms that bob prettily in the liquid until you fish them out. The Court Bouillon, a seasoned vegetable broth, was flavorless and bland (we wouldn’t recommend it), and the fourth, the Bourguignonne, is essentially a bubbling pot of canola oil.