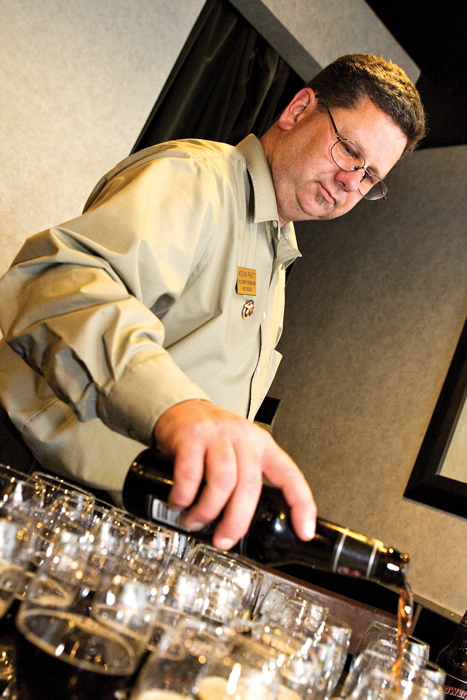 A certified cicerone is the beer version of a wine sommelier: an expert in beer styles and beer-food pairings. That such a job exists is evidence that beer has come a long way.
Kevin Pratt is one of roughly 500 certified cicerones worldwide, and the only one in the Sacramento Valley to hold the title.
A beer judge who has brewed beer both at home and commercially, Pratt says cicerones are “all about extending consumer understanding about beer and food pairing. It’s all about getting them to understand the range of flavors in beer.”
Pratt admits his own perceptions of beer shifted dramatically when he began home brewing more than 20 years ago. “I was captivated right away by the range of flavors I could create,” he says. “All I had known before that was fizzy, yellow beer.”
Today, he freelances as a cicerone, offering specialty beer dinners and classes and occasionally serving as a consultant to restaurants looking to refine their beer offerings.
“We’re still working our way into being more like sommeliers, where we are actually regular staff at restaurants,” says Pratt. “The official cicerone program is only 4 years old. Retailers haven’t yet quite caught on as to how this is going to help build their business and improve their bottom line, but I’m working to change that.”
He may just be in the right place at the right time. “I think that the beer trend is one of the most exciting things happening in beverages,” he says, “especially in Northern California, because this is where an awful lot of those very innovative breweries are.”
So what is this cicerone’s favorite beer-and-food coupling? “Belgian golden strong with moules frites, the classic Belgian pairing: mussels and french fries and beer. It doesn’t get any better.”