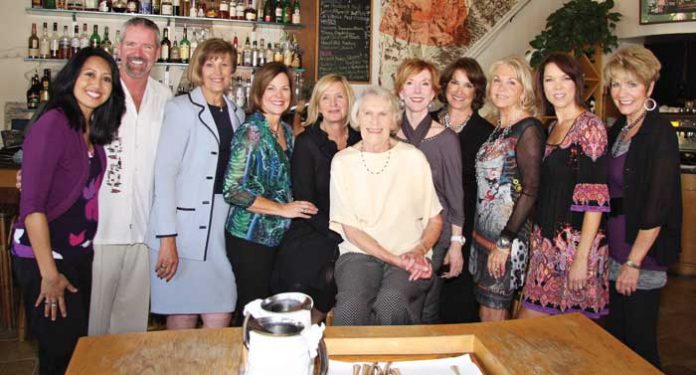 What: The final Divas lunch—ever

Wine time: Carolyn Fischer chose St. Supéry 2006 Virtú Meritage and Emeritus 2007 Pinot Noir. Before lunch, we raised a toast with glasses of tequila, thanks to Tim Hodge, who brought a personally inscribed bottle of Penca Azul from his private reserve.

Recipe for a successful restaurant: “It’s half employees, half food,” said Diva Gayla Mace. “You can have the most amazing food with rude or bad servers and people will not come back.” Diva Joan Leineke looks for good food, great décor and no Siberia seating.

What’s next: For the past 18 years, the Divas have lunched together on the first Wednesday of the month. Now what? Paulette would like to cook a special lunch in honor of the Divas; Bernice will look for someone to have lunch with; Peg will work out, knit, travel and wonder about the latest fashion trend without Joan to lead the way; Joan hopes to have catering jobs; and Gayla will think of all the Divas.

The Dining Divas—Gloria Glyer, Paulette Bruce, Bernice Hagen, Joan Leineke, Gayla Mace and Peg Tomlinson-Poswall—have been wining and dining together since 1993. Every month, they have lunched at an area restaurant, taking as their guests people who placed winning bids at charity events. They have raised more than $350,000 for local charities and nonprofits.