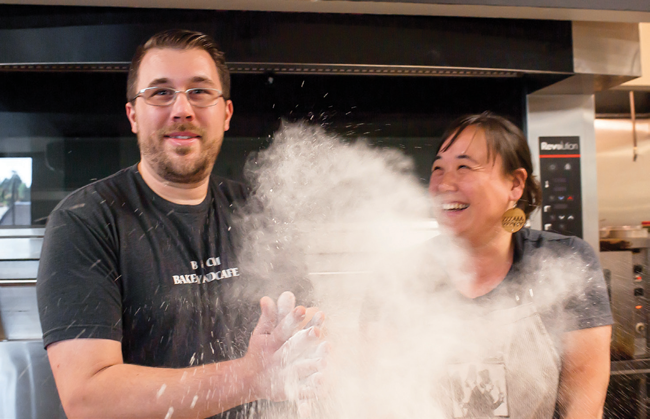 It’s been 10 years since Nathan Shreve and Alice Enochs Shreve founded The Baker and the Cakemaker, their celebrated wholesale bakery in Auburn. Last May, the married couple opened a cafe by the same name where they sell artisanal breads (his specialty) and pastries (her domain) to customers who appreciate their unique take on baked goods. We sat down with the pair as they compared notes on their lives as bakers.

How did you first get into baking?
Him: My mom always baked for special occasions and holidays. One of my first jobs was working in a bakery, where I realized I had a passion for it. At the Culinary Institute of America in Hyde Park, where Alice and I met, I started on the savory side of things. But after taking a baking class, I realized that that’s what I really wanted to pursue.
Her: I grew up in the restaurant industry. For more than 20 years, my parents had a restaurant in Auburn called Latitudes where they did a lot of international-style food. Like Nathan, I come from the savory side of things, and baking came a little bit later. That background is why our baked goods aren’t as sweet as typical bakeries. During an internship, a pastry chef took me under her wing and I realized how much I loved baking.

What is your favorite thing that your spouse bakes?
Him: The cardamom spice snails. It’s like a cinnamon roll made with croissant dough but using cardamom instead of cinnamon.
Her: A fresh baguette. I don’t think you can beat that. I like to eat it straight out of the oven with a little butter or olive oil.

What’s the most rewarding part about being a baker?
Him: Seeing people appreciate the quality of the product, either when they first take a bite of a loaf of bread or when they come back to buy a second loaf. You can see it in their eyes when they’ve really enjoyed something.
Her: I love feeding people. I love giving them things that they’re going to enjoy. I think eating good food makes anybody’s day better. You can ask any of my friends: I’m always trying to feed them to make them happy.

From where do you draw inspiration?
Him: Definitely travel. If we can get away, that’s what we do. Whether it’s going to Portland or the Bay Area or Europe, we take a lot of notes and photos and use those to get inspired.
Her: I draw inspiration from all the different cultural foods that I was exposed to and also from our local farmers. We have a lot of friends who are farmers, so from the beautiful produce that they are able to grow we are able to make delicious pastries.