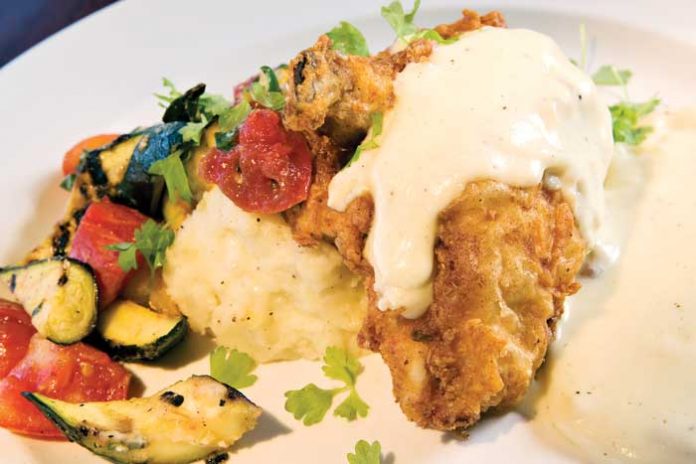 It’s always fun to support an underdog, especially one that tackles a personal mission with earnestness and commitment. Such is the case with David Hill, who opened a tiny restaurant last year in the chain-dominated city of Rocklin. The former chef of Horseshoe Bar Grill in Loomis and midtown’s G.V. Hurley’s, Hill decided it was time to offer Placer County diners a personable neighborhood bistro, serving up solid, approachable food prepared with locally sourced ingredients. Despite the scary economy, he opened his doors in June 2009 in Rocklin’s Blue Oaks Marketplace.
A pocket of warm conviviality in this expansive 12-acre retail center, The Chef’s Table certainly is engaging.
The cozy space is undeniably cramped. A bar/counter area affords excellent views of the kitchen staff in action, and small tables are crammed along the opposite wall, spilling into a dimly lit, narrow hallway (which also appears to be the restaurant’s wine storage area). Walk farther down the hallway and you’ll find the restroom, the subject of some hilarity on both of my visits, as no one seemed to be able to find the light switch. (It’s hidden behind a floral arrangement on a side wall.)
As the restaurant fills up, you’ll notice lots of jostling and muttered apologies as customers squeeze into their seats. Once settled, however, they’re able to focus on the very compact menu. About half of the selections change weekly, Hill says; he likes to keep his regular customers on their toes. It’s clear that recycling also is an important consideration for Hill: Turn your menu over, and you’re likely to see an outdated version on the back, which can get confusing.
On a recent lunch, I sampled a pretty plate of beer-braised, pulled pork tacos drizzled with chipotle sour cream. Nestled inside was a brightly flavored tangle of lime slaw, whose refreshing, citrusy bite greatly enlivened the dish. I couldn’t resist ordering Hill’s pesto fries, a dish that has created significant buzz among local foodies. The thin-cut fries, doused in pesto and adorned with a handful of grated fontina cheese, arrived emitting a heady garlic aroma. I soon discovered that the undoused fries were delightfully crispy, while the others were sodden with oil, and while the combined flavors were pretty darned delicious, three or four bites of the rich appetizer were all I could manage. I was pleased to have Hill’s Cobb salad—a lovely tumble of romaine lettuce, roasted tomatoes, apples and toasted pecans, with grilled chicken—as a counterpoint.
Dinner yielded some very tasty dishes, including a crunchy buttermilk-battered fried chicken. Served with lumpy mashed potatoes and a tepid pile of fragrant, summery ratatouille, it was perhaps the most pleasing entrée I sampled at The Chef’s Table. Another winner was the dense, flavor-packed smoked salmon cakes, swimming in a sweet, textural corn sauce; and the simple heirloom tomato salad, embellished with slippery roasted onions and a robust blue cheese dressing, was a satisfying starter. Carnivores will appreciate Hills’ beautifully grilled lamb sirloin, accompanied by an earthy-smoky, complex housemade steak sauce whose 26-ingredient recipe is kept carefully under wraps.
Visit The Chef’s Table a few times and you’ll notice that bacon appears consistently in Hill’s cuisine—both savory and sweet. “I’m a bacon freak,” admits Hill, who even sprinkles tiny bits of the meat in his brownies. The brownies are made with equal parts butter and bacon fat, then are immersed in—you guessed it—bacon caramel sauce. “When people see this on the menu,” he adds, “they ask, ‘What’s wrong with you?’ Then they try it and love it.” Other desserts he tends to make are “about comfort,” he says, such as fruit crisps and cobblers, whose produce he sources from local farmers markets.
Hill’s bold decision to open a restaurant last year seems to have paid off. Placer County and Sacramento diners clearly have embraced this friendly establishment, which Hill likes to call “the anti-chain restaurant.” If you want to visit The Chef’s Table Thursday through Saturday night, you’d better have a reservation—the small space fills up fast. I’m pleased for Hill and his staff, and am rooting that this little restaurant will continue to do big things in Rocklin.

French Dip It: If you’re a French dip fan, check out The Chef’s Table’s version: shaved pork loin piled on a Dutch crunch roll, with jalapeño-pineapple relish and a steaming side of mustard au jus
Keep It Small: Because of the restaurant’s size, it’s best to keep your dining party on the small side
Wine Perk: The restaurant’s corkage fee is $15, but if you purchase an additional bottle off the restaurant’s wine list, your corkage fee will be waived