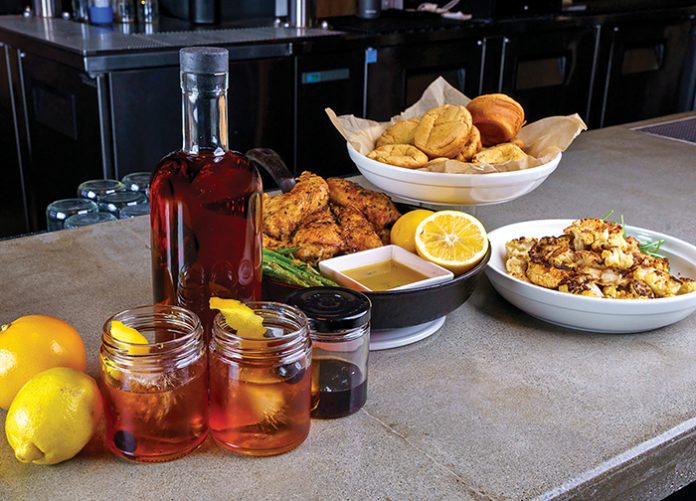 The first distillery to open in the city since Prohibition is generating plenty of buzz in spite of not opening its doors to patrons for most of the winter due to pandemic restrictions.

Midtown Spirits, which launched in November, is owned by Jason Poole and Dave Abrahamsen, the folks behind the popular cocktail-mix maker Preservation & co. The small-batch distillery is part of a full-fledged bar and restaurant operation on 19th Street in midtown where Preservation’s retail site was formerly located.

“Thanks to Preservation, we were known for our cocktail mixes, so it made sense to move into making the spirits that go along with those,” says Poole.

The initial product line at Midtown Spirits includes a vodka and a gin, both distilled from rice. “There are only four other distilleries in the nation that make a rice spirit, so that makes us pretty unique,” says Poole. “We wanted to use rice because it is a prolific local crop. It just made sense: We’re the farm-to-fork capital, so why not do something farm-to-bottle?” There are plans in the works for Midtown Spirits to produce rum, whiskey and an agave spirit. “The sky’s the limit with our 400-gallon hybrid still,” says Poole.

It may be somewhat misleading to call the food at Midtown Spirits pub fare given the thoughtful interplay of ingredients: a Caesar with boquerones dressing; deviled eggs made with remoulade and Bloody Mary seasoning; a cheddar-stuffed burger with steamed onions and dill relish on a brioche bun. And yet the menu, which was designed by FJ and Janine Villalobos, is precisely the kind of food one craves while knocking back a cocktail or two.

Although opening a new business in the midst of a pandemic is no one’s idea of a good time, you might say Poole and Abrahamsen have kept their spirits up. “It’s been a real wild ride,” says Poole. “We’re excited to have people in here. We’re really proud of what we built.”