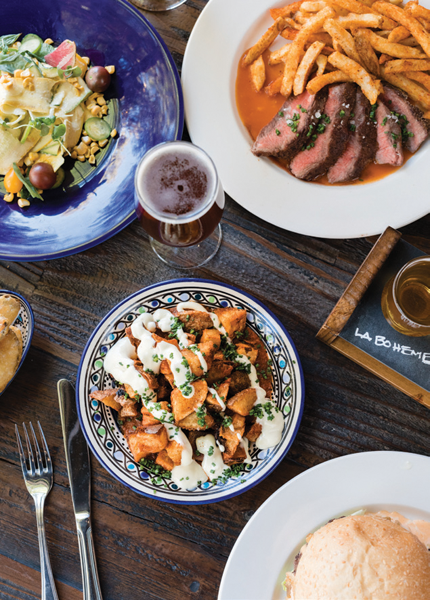 When Sacramento’s groundbreaking Rubicon Brewing Company closed its doors in 2017, it was clear that whoever took over the space would have big shoes to fill. Rubicon, founded in 1987, was a pioneer in the area’s beer scene and enjoyed legions of loyal customers.

Enter Ray and Annette Ballestero, husband-and-wife craft-brew veterans (she was a founder of River City Brewing Company) who for years had dreamed of owning their own brewery and restaurant. “I used to hang out at Rubicon in the early days, and I brewed a lot with their original brewer,” says Ray. “It’s a time-honored space, and we recognize that. It’s been such a staple in the community—I wanted to be sure we approached it with class and respect for the history that was here.”

Ray, whose family hails from Spain, wanted to bring that country’s culinary traditions into the kitchen at Alaro Brewing Company. Together with head chef Jason Azevedo, the owners devised an appealing menu of small plates and entrees with a Spain-meets-Sacramento sensibility.

“The main thing that attracted me to Alaro was that they weren’t looking for your standard brewery menu with just burgers and chicken wings,” says Azevedo. “It’s a tapas-inspired menu with a focus on fresh local produce. Being in Sacramento, there’s a lot of Spanish influence on the things that are grown here.”

Sharable dishes like papas bravas, Catalonian eggplant, clams and chorizo, and gambas al ajillo (garlic shrimp) pair nicely with the house beers, which Azevedo describes as “not overly hopped, with a nice grain-and-malt balance and a lot of character.” The seasonal menu allows Azevedo, who founded Testa Duro Salumi, to show off his talents in the charcuterie department. The porchetta in the PLT sandwich is made in house, as are the chorizo and lamb sausage. Still, vegetarians will find much to love on a menu that is refreshingly vegetable-forward for a brewpub. And two crowd favorites—fried dill pickles, or frickles, which are accompanied by a caper aioli, and fish tacos, made with rockfish dipped in a Pilsner batter—are hardly Spanish staples, but Azevedo is happy to oblige customers.

“We are a brewery, so it’s a fine line between fried pickles and burgers and hitting them over the head with tapas,” he says. After all, “the idea is to be tapas inspired,” not to turn out wholly faithful renditions of Spanish classics. His guiding philosophy: “It’s gonna be small plates; it’s gonna be shareable; it’s gonna be fun.” 2004 Capitol Ave.; (916) 436-7711; alarobrewing.com