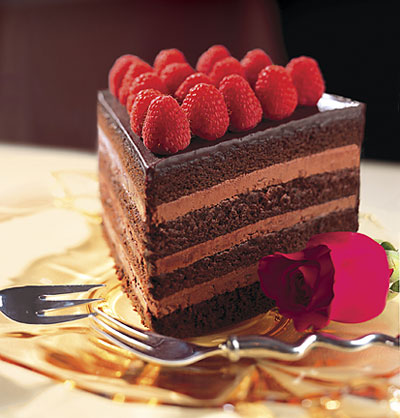 Most romantic spot: Tables 43 and 44
Sofia restaurant is all about romance, from the single red roses in slim vases that hang on the walls to the cuddly couch area that flanks the bar. The evening ambiance is bewitching, with softly flickering candles providing much of the light at the front of the restaurant. Linen-draped tables for two sit beneath small white lamps suspended by wires so thin, the lights look like they are hovering overhead. Walls are painted creamy beige, gauzy drapes hang softly in the upper dining area, and the atmosphere feels tranquil and relaxed. Slip into one of the back booths, plush with velveteen fabric and illuminated with tiny teardrop chandeliers, and sip a martini while you gaze into each other’s eyes.

Sofia’s menu offers “regional Italian” cuisine, emphasizing housemade pasta that is prepared daily, and it was the pasta dishes we sampled that we found most exciting. We devoured the tender tortelli, half-moon-shaped pasta stuffed with a sweet kabocha squash filling and sprinkled with plump rock shrimp. The restaurant’s signature dish, the Sofia pasta, was delivered with a flourish in a parchment envelope that, when torn open, revealed a mouthwatering tangle of black taglioline tossed with mussels, clams, scallops and prawns, bathed in a brightly flavored tomato sauce. Other winners are the dolce amara salad, composed of warm sautZed spinach combined with sharp radicchio leaves, crumbles of delicious Gorgonzola cheese, sweet apple slices and housemade croutons; and the crunchy, greaseless “flash-fried” calamari.

Most romantic spot: Table 65
Romance can be found in the air at Garbeau’s, which delivers energetic theater performances in conjunction with some pretty fine dining. Attendees’ excited expectation (which is contagious), coupled with very dim, sultry lighting, can make for an electric-and flirtatious-atmosphere. We saw many couples arrive holding hands, clothed in glamorous garb and flashing lots of costume jewelry. And although the house is packed by performance time, there are several small tables for two that directly face the stage with no obstruction, lending a sense of privacy in a sea of people. The food at Garbeau’s has improved over the past few years, despite the constant challenge the kitchen faces having to feed so many people in a very short period of time. On a recent visit, we were especially impressed with the beautiful, perfectly cooked vegetables accompanying the main courses, which included a tender, tasty roasted chicken breast stuffed with pancetta, mushrooms and roasted red bell peppers and blanketed with a truffle cream sauce. Other entrZes you may find (the dinner menu changes with each production) are red wine-braised beef short ribs, grilled salmon and roasted pork loin Normandy, napped with an apple, pancetta and hazelnut butter sauce.

Most romantic spot: the curtained beds in the courtyard
Let’s just cut to the chase and say that, if you are looking for a private-yet-still-public place in which to romance your sweetie (or perhaps find a new one), you need look no further than Mason’s, downtown Sacramento’s newest-and hottest-urban eatery. If seclusion is your goal, bypass the restaurant’s sleek dining room and head directly for the beds-yes, beds-located in the outdoor courtyard. Available for rental at an astounding $500Ð$550 an evening (from 9 p.m. to 1 a.m.), the beds come with their very own cocktail waitress and are equipped with curtains that can be drawn all around, offering the couple or group inside oodles of privacy. “A lot of things go on out there. It’s a little out of control, actually,” confessed our waiter at a recent lunch. “Sometimes seven or eight people pile in there and close the curtains,” he added with a lascivious grin. Our busgirl blushed when we asked about the beds. “See no evil, speak no evil,” she said, covering her mouth with a firm hand.

Note: Occupants of the beds cannot order from the regular menu; Mason’s offers a limited menu of appetizers only.A

Most romantic spot: Table 31 (next to the fireplace)
Lord of the Rings fans will be smitten with Mustard Seed, whose rustic, woodsy interior and low ceilings reminded us of Bilbo Baggins’ cottage. This neighborhood favorite is composed of three tiny rooms, each containing only four or five tables, which contributes an intimacy and coziness-perfect for a couple seeking a romantic experience. We especially like the snug middle room, with its wood-paneled walls, enormous brick fireplace and antler chandelier. The restaurant is filled with whimsical artwork and metal sculptures; benches are upholstered with unusual, earthy fabrics, and chairs are made out of twiggy-looking wood that looks as though it were recently plucked from the forest. Mustard Seed’s menu changes often, but you’ll always find dishes that emphasize fresh, locally produced, seasonal products. Try the kitchen’s fat crab cakes, served with a sweet, gingery Asian dipping sauce. The frisZe salad, another winner, is tossed with toasted pine nuts and applewood-smoked bacon and topped with warm baked Laura Chenel goat cheese and jewellike raspberries. Dinner selections range from a polenta-stuffed, honey-glazed quail and wild-mushroom lasagne to scallops ProvenÂal in a fennel-infused tomato broth. Desserts are all house-baked and sometimes run out midevening, so if you have a sweet tooth, be sure to ask about them at the beginning of your meal.

Most romantic spot: all seats equally romantic
Auburn residents are in on a big secret: One of the most spectacularly romantic dining venues in the region is located in the back of a neighborhood wine shop called Carpe Vino. On most Saturday nights, a tiny building Carpe Vino’s owners call the “wine mine” is transformed into a magical, candlelit room, lavishly set for 24 diners.

The wine mine, thought to be one of the oldest buildings in Auburn, was constructed more than 150 years ago. You get to it through a small cobblestoned courtyard behind Carpe Vino, then pass through a heavy iron door (thought to be the building’s original fire door) to enter the 13-by-23-foot space. The building, constructed with locally mined stone, was built into the side of a hill.

In April 2005, Carpe Vino owners Gary, Laura and Drew Moffat began offering exclusive prix-fixe winemaker dinners in the little building, prepared by two young and talented Culinary Institute of America graduates. The dinners, hosted by Gary and visiting winemakers, quickly became so popular that they began selling out weeks in advance. They’re now a regular feature of the wine shop, and the Moffat family plans to expand the evenings on which the dinners are offered.

“When we started out,” remembers Gary, “we thought it would be the wine that would be the star of these dinners, but it’s the wine-and-food pairings that people love.” With that in mind, Moffat and his two chefs spend hours preparing for each dinner, carefully discussing which wine will work with which course. “We tasted at least 40 wines in preparation for our French-themed dinner,” he says with a rueful laugh. Very well-respected wineries, such as Nickel & Nickel and Duckhorn Vineyards, collaborate with the chefs on the dinners.

One of the most compelling draws of the events, however, is the wine mine itself, which is deftly transformed from a bare stone room into a sumptuous, intimate and very romantic space in which to enjoy these multicourse feasts. “People feel like they have been transported someplace far away,” says Moffat. “It’s like a fantasy world.”

FOR THE REST OF THIS ARTICLE, PICK UP A COPY OF SACRAMENTO MAGAZINE’S FEBRUARY ISSUE.