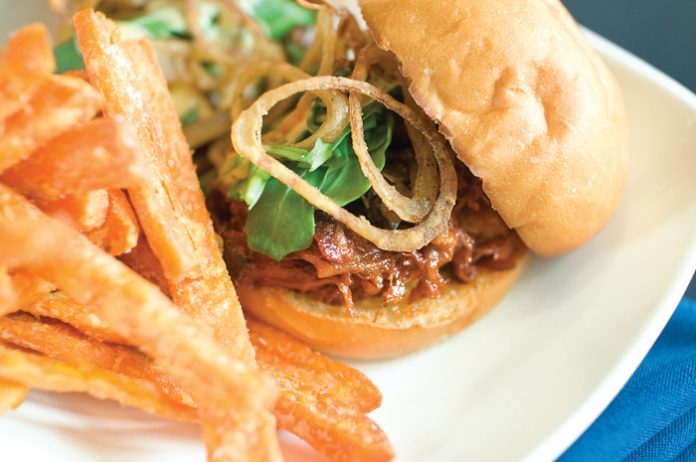 Casual neighborhood restaurants are on the rise—not only in Sacramento, but throughout the nation. Beleaguered by a depressing economy, diners are seeking a different kind of experience. Longtime local chef Irie Gengler, who has headed up the kitchens at The Firehouse and Crush 29 in Roseville, recently opened his own small neighborhood restaurant in Granite Bay.
Located in the old Toast restaurant space in Quarry Ponds shopping center, Source Global Tapas is the sort of informal place where you might drop in after a long day at work, or when you simply can’t think of anything to make for dinner. Its name reflects Gengler’s commitment to utilizing locally foraged ingredients. A fan of small-plate dining, Gengler offers a menu of globally inspired tapas that are designed to be shared. Diners who want their own entrées can double the size of any small plate for double the price, minus two dollars. Interestingly, says Gengler, almost no one has chosen that option. People, he says, “are starting to graze more.”
The restaurant looks much the same as when it was Toast. The walls are now adorned with attractive black-and-white photographs of kitchen utensils printed directly onto birch wood, which adds a bit of warmth to the room’s stark, almost institutional feel. The most distinctive aspect of the space is its stunning views of Quarry Pond directly outside. I can’t wait until the weather warms, when I can enjoy a glass of wine and one of Gengler’s creative nibbles on the patio.
The eclectic menu changes frequently and is compact and playful. This may be the first time that Granite Bay diners have seen teriyaki sausage and pistachio mortadella on a charcuterie plate. I enjoyed the simply presented Boquerones and Sobrasata: smoked paprika pork spread on freshly baked bread and topped with marinated white anchovies. The porkhad an intriguing sweetness from the judicious addition of honey—a nice foil for the saltiness of the fish. And a complex, creamy kabocha squash soup was a total knockout, spattered with rich pumpkin seed oil and garnished with diced chives.
The baby back ribs, prettily glazed with honey barbecue sauce, were topped with thinly sliced marinated cucumbers and sesame seeds. While I liked the delicately grilled wild salmon, I found its accompanying three-bean-and-pork cassoulet curiously bland. A refreshing mixed greens salad, dotted with magenta pomegranate seeds, was embellished with poached prawns and juicy segments of local satsuma mandarins. Two plump Niman Ranch beef sliders, flanked by shockingly orange, crusty sweet potato fries, were terrific at lunch.
Source also offers an imaginative brunch menu, with dishes such as cinnamon brioche French toast and mini-pancakes with coconut syrup. I relished the simple fresh sausage-and-egg plate, with its modestly sized portion of eggs and ravishing fresh chorizo and chicken-tomato sausages. Many of the lunch dishes, including a handful of salads, appear on the brunch menu as well.
The short, thoughtful wine list is almost exclusively Californian, and there also are several beers on tap, including Pliny the Elder, a highly sought after Double IPA from Russian River Brewing Company. (Only 10 or 12 restaurants in the country have Pliny on tap.)
On both my visits, the waitstaff was irrepressibly cheerful and attentive, clearly proud of the restaurant and its interesting menu. I admire Gengler’s originality and energy, and I’m keeping my fingers crossed for him. This may be one small restaurant that’s able to flourish—despite the dubious economy—in 2011.

A deal: The kitchen sends out complimentary tapas with wine orders
You choose: The mix-and-match sliders include chicken breast with avocado and “six-hour angry pork” with crisp shallots
Sweet finish: For dessert, order the Grande Cafe, a delicious cup of espresso and melted dark chocolate