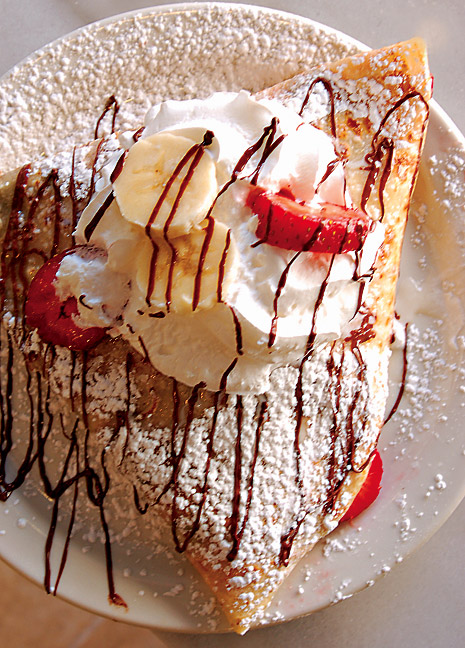 Owned by crÃªpe-making veteran Michel Bloch, The CrÃªpe Cafe at downtown Sacramento’s Ninth and K offers an appealing selection of savory and sweet crÃªpes. The ambiance is decidedly upbeat, with bouncy French tunes playing in the background and sunlight streaking in through floor-to-ceiling windows. Chairs are plastic wicker, tables are cool marble, and if you cock your ear toward the crÃªpe production line, you’ll hear French being spoken.

The food isn’t fancy, but it is comforting and hearty. CrÃªpes range from simple (the Fromage Classic, filled only with your choice of cheese) to the complex (the Beef Bourguignon, made with beef and carrots in a red-wine sauce). I like the chunky Acropolis, whose filling of tomatoes, artichoke hearts, kalamata olives and feta cheese works perfectly with its earthy whole-wheat crÃªpe. All savory crÃªpes come with ratatouille, a delightful hodgepodge of stewed zucchini, bell pepper, tomatoes, eggplant and onions. If crÃªpes aren’t your thing, try the French onion soup or the Croque Michel, a baguette piled with ham and Swiss cheese, tomatoes and a cheesy Mornay sauce.

There are dessert crÃªpes, too, such as the French Kiss (chocolate and sliced bananas wrapped in a Grand Marnier-doused crÃªpe) and a simple lemon crÃªpe, topped with a squeeze of fresh lemon juice, butter, powdered sugar and a small mountain of whipped cream.