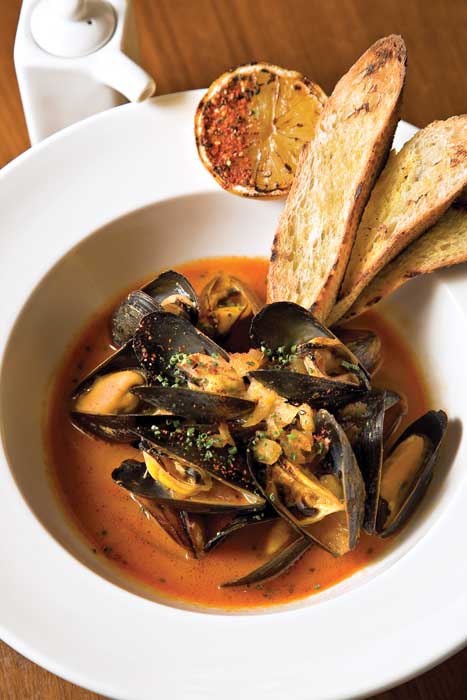 While I love living in Sacramento, I experience some stirrings of mall envy whenever I go to Roseville. Recently, those feelings intensified when I visited the Fountains shopping center, which boasts not only fabulous landscaping and upscale stores but also an enticing cluster of restaurants, from McCormick & Schmick’s and Tres Agaves to California Pizza Kitchen.
An edgier restaurant recently took up residence at Fountains, one that aims to attract not only shopping-weary customers but also a late-night crowd. Sake House, which brings a touch of big-city-lounge ambiance to this suburban shopping center, has an interesting provenance: It was created by investors Randy Paragary and Bob Simpson, and the opening menu was crafted by consulting chef Buu “Billy” Ngo of midtown’s Kru and Red Lotus. Day-to-day operations are managed by Mike Rapport, a developer who owns Basic Urban Kitchen + Bar and The Rose Room in Roseville’s historic district.
Sake House is a long, narrow, dimly lit space with a warehousey, urban flavor. A long bar and a curtained-off dance area dominate the room; a small sushi bar seats only a handful of diners. It’s clear where the owners’ priorities lie: Sake House is a place to party.
The name Sake House suggests that the Japanese beverage must be a central component to dining here, but on my three visits, friendly waiters were clearly uneducated about the limited sake selection. After I peppered one server with questions about the different varieties, she brightly recommended a $21 selection (in a 300ml bottle) called Pure Dawn because it was the sushi chef’s favorite. Figuring any recommendation was better than none, I ordered a bottle and was blown away by its citrusy, delicately floral and vivaciously refreshing character. On another visit, I ordered a sparkling sake and was enchanted with its lush apricot flavors and shy, tickly bubbles. It’s unfortunate that the waiters aren’t more knowledgeable; I’m certain they could make some sake converts with confident, thoughtful recommendations.

Despite visiting at prime times during the week, I found the dining room spottily seated. There was the sense of having arrived too early for a party, and the staff often seemed preoccupied, as if tending to early diners was simply the evening’s side work before the real festivities began. I didn’t mind, however, once I tucked into some of the kitchen’s dramatically presented dishes. One standout was a glossy, tangled heap of wakame seaweed salad, which offered a lovely, crunchy texture and just the right amount of toasty sesame seeds. A striking udon soup, filled with shrimp tempura, thick, silky noodles, broccoli and chunks of chicken, was served in a rustic Japanese bowl and was embellished with a soft-boiled egg.
The Static Roll, which arrived on a long, white plate, was stuffed with deep-fried soft-shell crab and smoth-ered prettily with seared yellowfin tuna, warm eel, avocado, scallions and a spicy-sweet cream sauce that made my tongue tingle. Not as successful, but still tasty, were the chewy short ribs. A bowl of sake-steamed mussels bathed in a fire-orange broth made with kochujan (a Korean hot red pepper bean paste) posed a challenge: Have you ever tried prying a mussel from its shell with chopsticks? The thickly battered vegetable tempura was crispy and nongreasy, and a dish called Ahi Tataki featured seared blocks of fish in a pool of zesty ginger-daikon ponzu sauce that I would have enjoyed much more if the fish hadn’t been topped by a thatch of old-tasting, pungent, thinly sliced red onions.
Although I was perplexed by Sake House’s identity (is it a lounge? a restaurant? something in between?), I liked the food enough that I would certainly drop in again after a day of shopping. If your feet are sore (or your credit card is tired), visit Sake House for a fancy sushi roll and a wakame salad—paired with a bottle of sake, of course. Just call me for a recommendation.

Heat wave: The Inferno sushi roll is made with spicy tuna and jalapeño peppers, topped with a jalapeño-tobiko chili sauce
Food for thought: For meat eaters, there’s grilled rack of lamb, served with a rosemary and balsamic-teriyaki sauce