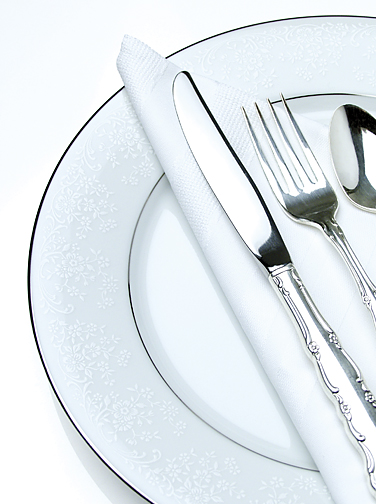 If a restaurant experience could elicit flashbacks, I believe my Ruth’s Chris flashback would be dominated by melted butter: its aroma, its sheen on food, its slick, fatty mouthfeel. This is not surprising, considering the restaurant incorporates butter into-and on top of-a large percentage of its dishes.

Dining at Ruth’s Chris is all about decadence: damning your weight chart, ordering and eating more food than the average person can ingest in an entire day-and paying dearly for the experience. Health nuts, frugal folks and calorie-counters need not apply-Ruth’s Chris is all about sybaritic abandon. As long as you know that going in, you will experience immeasurable satisfaction. If you don’t, the experience is likely to be a buttery shock to the system-and the pocketbook.

The region’s newest Ruth’s Chris inhabits the building formerly occupied by Mace’s, and the transformation is so complete that we spent half of our first meal there marveling that it could possibly be the same space. Where Mace’s was cramped, Ruth’s is airily expansive; where Mace’s was dated and cluttered, Ruth’s is spare, elegant, contemporary. Walls are a warm gray-beige, and ornate, gothic-style wall sconces add an anachronistic splash, reminding diners of the restaurant’s New Orleans roots.

The dining room swarms with nattily outfitted restaurant staff, darting here and there to refill water glasses, decrumb tables and generally cosset and indulge the patrons. Waiters burst dramatically out of the kitchen, trays held high above their heads, as they bear audibly sizzling dishes to their tables. Food service is a deft and gracefully choreographed event.

As the evening progresses, it’s hard not to notice the aroma of browned butter. When Ruth’s steaks depart the 1,800-degree broiler, each is laid on a 500-degree plate and adorned with butter, which melts and scalds during its journey to the table. The odor of this browning butter follows waiters like a pungent wave. At first it is an intriguing-maybe even alluring-smell, but by the end of the meal it is overly pervasive. So pervasive, in fact, that I felt compelled to take a shower when I got home to remove the scent from my hair and skin.

We’d heard we shouldn’t waste our time on non beef entrÃ‚’es, since Ruth’s Chris’ claim to fame is its corn-fed USDA Prime aged steaks. Stubbornly, however, we ordered a number of items that weren’t steaks, only to conclude that the advice we’d received was spot on. It’s the steaks that shine. The first of several we tasted was the 16-ounce New York strip, and the memory of that initial bite is seared in my mind: luscious, rich and ethereally meaty; I involuntarily closed my eyes to concentrate on the marvelous experience unfolding in my mouth. “I could never be a vegetarian,” uttered my half-lidded dining companion.

By bite four or five, however, I was completely sated-the lubricious fattiness and melted butter began to shellac my senses, and I found myself searching for something on the table with which to refresh my palate. My friend didn’t seem to have the same problem; he gobbled up the remaining chunk of meat in about two minutes flat. Other steaks we went on to thoroughly enjoy during subsequent visits were the 22-ounce “cowboy” rib-eye, which looks like a bulky tennis racket (but is amazingly tender), and the 24-ounce T-bone, which completely covered the plate.

As John Donne might say, no great steak is an island, entire of itself: It must be accompanied by lots of other fattening menu items. We would suggest Ruth’s spectacular “French-fried” onion rings, stacked seven to a plate. Enormous, heartily crunchy yet silky-soft inside, these babies live up to any hype you may hear about them. We also loved the kitchen’s nut- and sugar-topped whipped sweet potato casserole (which really should have been on the dessert menu) and the blue crab cakes, whose simple purity of taste was not marred by any fillers or spices.