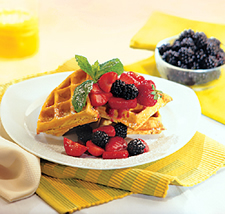 It’s breakfast time. So rub the sleep out of your eyes and join us on a culinary tour of the best breakfast spots around.

The link between Italian cuisine and hearty breakfast fare may not be obvious to most, but in Davis, there is a clear connection between the two. Caffe Italia, established in 1982, has built a reputation on its solid, high-quality breakfasts while continuing to serve up pasta arrabiatta and sausage calzone to loyal dinner customers. Imagine the interior as a picnic area transported indoors: The center of the room is dominated by an interlocking labyrinth of booths, divided by tall wooden lattices that extend into a lattice “ceiling.Â” Cheery green-checkered vinyl tablecloths add to the picnicky feel, and every crevice of the restaurant is crammed with homey Italian bric-a-brac: bunches of dried garlic and chile pods, colorful old olive oil tins, lovely hand-painted ceramic pieces and preserved food floating prettily in glass jars. Crayons crammed in old tomato paste cans invite you to doodle on the butcher paper-covered tables.

It can be somewhat difficult to wade through the hefty breakfast menu, which lists 19 different omelettes, including “the Kitchen Sink,Â” which, we were told, changes daily, as well as a number of waffle and pancake combos, egg dishes and the bane of Atkins dieters: biscuits and gravy. The day we visited, the special was cheddar cheese grits, the idea of which we found immensely appealing. The grits, accompanied by scrambled eggs, arrived in a blaze of yellow, adorned with two thick, hearty pieces of very good bacon. Celestially light, with a silky-bumpy texture, they were extremely comforting. The French toast was excellent, prepared with thick slices of French bread. Moist and custardy throughout, they had a frisky tang of cinnamon and a nicely browned exterior. Service was punctual and friendly, and we left with only good things to say about Caffe Italia. No wonder it’s still going strong after 22 years.

Katrina’s Cafe is a good reason to envy anyone lucky enough to live in Auburn. This tiny, congenial establishment was the shining gem in our quest for an excellent breakfast. And while it’s quite a time commitment to drive from downtown Sacramento to Auburn just for breakfast, we would do again it in a heartbeat.

Wedged in between a car dealership and a Honda motorcycle dealership on a frontage road off Highway 49, Katrina’s doesn’t boast a glamorous location. The dining area is just one small room with mustard-yellow cinderblock walls decorated with colorful plates, a cheery checkered carpet and an old-fashioned hutch stuffed in the corner.

Katrina’s menu is substantial and filled with things we wanted to eat, like the date-walnut French toast and a chili con carne omelette. However, the restaurant completely bamboozled us by offering an entire chalkboard of additional breakfast items, which seemed to be a creative overflow of goodies they weren’t able to squeeze onto the written menu. Items appearing on the board included Katrina’s housemade corned beef hash (which, sadly, was already sold out by the time we arrived), a “Tuscan scrambleÂ” (grilled rosemary-potato bread topped with scrambled eggs, goat cheese, sun-dried tomatoes and pesto) and chicken-fried steak. There were four different kinds of quiches and a dizzying selection of pancakes.

After learning from the waitress that the lemon-yogurt pancake was “our best pancake,” we gluttonously ordered one in addition to our entrées. It came rolled up like a blintz and was sprinkled with powdered sugar. It was so delicate, lemony and tangy, we could have plowed through an entire stack and walked out happy. The “avocado delightÂ” omelette was, I can say without hesitation, the best omelette I’ve ever had. The outer egg portion was thin and nicely browned, encasing loads of bacon and chunks of avocado, tomato and sautéed onion, with just enough cheddar cheese to pull all the favors together. My friend’s vegetable quiche, topped with melted cheese, was the size of a small divan and filled with small chopped bits of carrot, zucchini, broccoli and mushroom. Both plates showcased gorgeous fruit arrangements: apple slices and fresh raspberries, blueberries, strawberries, blackberries and watermelon.

The moment we knew we were in a restaurant that really cared about quality was when a cook came scurrying out of the kitchen to deliver our food. A waiter wasn’t available at the moment our breakfasts were ready, so instead of leaving it to get cold, the cook brought it out herself. (Note: Before you head to Katrina’s, stop by the bank machine first—the restaurant does not accept credit or debit cards.)

Who says eggs Benedict is the be-all and end-all of a fine brunch? There are some who believe huevos divorciados (corn tortillas topped with eggs, chile verde and steak ranchero) is special enough to play the starring role in a lazy, indulgent weekend meal. The next time you want to shake up your sleepy taste buds, consider heading to Ernesto’s, which serves up one of the most satisfying brunches in town.

When we arrived on a Sunday morning, the sound system played sprightly mariachi music, and happy diners were hoisting a number of interesting-looking beverages to their lips. The mood was relaxed and festive, and we liked it. Why not drink beer at 10:30 in the morning, we reasoned, especially if it’s disguised in a feisty tomatada (beer with spicy tomato juice)?

Mulling over the suds-for-breakfast idea, we dug into Ernesto’s excellent salsa, which looks a bit like baby food but bursts with big, fresh tomato and cilantro flavors. Deciding we actually did need to accomplish things that day, we opted for a Mexican hot chocolate instead of a bloody maria. And we were glad we did: The cocoa, sporting an enormous, frothy head of whipped cream, was a revelation with its rich, complex combination of chocolate and cinnamon.

The next big surprise came in the form of our pozole, a rustic, stewlike soup redolent of New Mexican chiles, oregano and garlic. Hunks of tender pork and hominy (dried corn whose hulls have been removed)floated in the deep red broth. Next to the bowl were piles of chopped red onion, cilantro, sliced radishes and red cabbage. We threw it all in with abandon. Crunchy, spicy, tart and meaty, the melange of flavors and textures threw our palates into a delightful spin.

My husband groaned blissfully as he shoveled in mouthfuls of eggs scrambled with chorizo, diced tomato and onions. “Make sure you really recommend this,” he said, scraping up every last morsel. Next time, we’ll make sure to wash it down with an ice-cold Tecate.

A breakfast institution in Sacramento, Fox & Goose is still thronged with crowds of diners every weekend, despite an ever-growing restaurant population. Our solution is simply to visit during the week, when you don’t have to wait outside with other hungry, cranky people.

Pass through the boozy miasma of the pub area and you’ll discover the long, narrow dining room. Very high ceilings give the space an airy feel, while the worn wooden floors and weathered parquet tables reveal decades of busy food service. Bushy houseplants strain desperately against stained-glass windows, and walls are plastered with resolutions from the City Council and state legislature praising the restaurant’s significance in the Sacramento region.
As you might guess, British cuisine rules at Fox & Goose, and you can’t leave without trying a kipper (smoked Atlantic herring) or a banger (English sausage). Other quirky items that may excite Anglophiles are the Welsh rarebit omelette and the restaurant’s pub grills.

Our English muffin and our crumpet arrived so saturated with melted butter that we squeezed tablespoons of it out onto our plates. Then followed a lively discussion of the difference between crumpets and English muffins, and we resolved that English muffins were a crude American imitation of a sublime English invention (the crumpet), which looks sort of like a English muffin but is chewier, glossier, less bready and the perfect vehicle for your very best strawberry jam. Our pub grill consisted of pert poached eggs, chunky “English country potatoesÂ” friedwith flecks of bell pepper and onion, and bangers that were pleasantly salty but so fatty-tasting that my arteries quivered in horror. The New Yorker omelette—packed with smoked salmon, cream cheese and slightly crispy onions—was downright terrific, though a bit oily. And if that weren’t enough food for two, we also enjoyed a thin, golden whole-grain waffle.

Pacific Northwest cuisine is alive and well at 33rd Street Bistro, which has maintained a brisk and popular breakfast crowd for years. Rough exposed brick walls and lush, sensuous paintings of fruit set the stage for robust dishes like the Northwest scramble (with wood-roasted salmon and fresh dill) and the restaurant’s pretty berry griddlecakes.

Seafood, not often spied on breakfast menus, shows up in several appealing menu items. We particularly like the smoked brook trout hash. Yukon Gold potatoes are finely diced and fried up with bright, tiny pieces of zucchini, red onion, squash, and yellow and green bell pepper. Sweet chunks of smoked trout punctuate the hash, and the entire jumble is smothered with two fried eggs and hollandaise sauce, and served with first-rate grilled toast. It may sound over the top, but somehow it all works beautifully together. As my friend explained between rapturous bites, “The egg yolk melts into the hash, and the hollandaise doesn’t overpower the dish; it just lubricates it.” Another fave is the cracked hazelnut waffle, topped with juicy red strawberries and mountains of whipped cream. It’s tall, dense and crisp, with a roasty, nutty flavor waffle lovers will adore. Huge appetites will appreciate the breakfast panini, composed of toasted challah (Jewish egg bread) stuffed with scrambled eggs, Emmenthaler cheese, smoked turkey and herb mayonnaise.

BRUNCH AT THE HYATT

It’s virtually impossible to describe the panoply of food available at the Hyatt Regency’s extravagant brunch. Food-laden tables seem to stretch as far as the eye can see, displaying familiar items such as scrambled eggs, bacon, eggs Benedict and sliced fruit, as well as a mind-boggling assortment of interesting things we have never encountered at a standard hotel brunch. Imagine, if you will, the plate my dining companion brought eagerly back to the table, stacked high with sea bass in a ginger fennel sauce, two fruity cheese blintzes, a pile of smoked mackerel and a fat, glazed Danish. Hiding a smirk, I turned away to tuck into my sushi and French toast, while greedily eyeing a chafing dish stocked with hot chicken Provençal. Red-meat eaters will rejoice at the hot prime rib (carved to order, of course); people longing to be pampered will enjoy the made-to-order omelettes; and children will gasp in delight at the gorgeous dessert table. Brunch is $30 per person ($15 for children), so plan to bring a lumberjack’s appetite and a well-stocked wallet.

Ah, the calories we ingest in the name of breakfast. One shameless example is Tower Cafe’s strawberry and white-chocolate scone, found next to the hefty (and substantially more fibrous) raisin bran muffins in the restaurant’s display case. Shiny with its egg and sugar glaze, this cakey, crumbly pastry has tiny bits of strawberry and big pockets of smooth, soft white chocolatey goodness that will make you sigh with luxurious satisfaction. If you’re the guilty type, throw in a side of fruit or a scrambled egg for a complete breakfast. The combo may well constitute all the calories you’re allowed for the day.

* For the rest of this article, pick up a copy of Sacramento Magazine’s October issue.