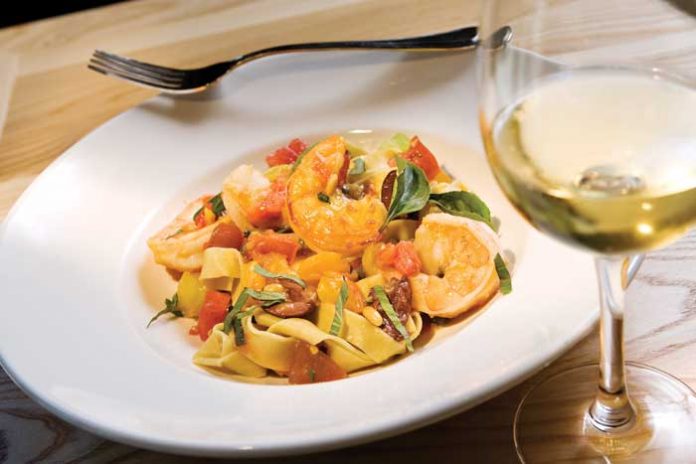 After my first flawless visit to The Press Bistro & Bar, four days after it opened, I figured it was a fortunate fluke. But after a second and then a third visit, it was apparent that The Press is The Real Thing. Chef/owner David English wasn’t just having a couple of lucky nights. A mere two weeks into its opening, his midtown restaurant was already running like a finely tuned machine.
Each time, I watched English, all jutting shoulder blades and quick movements, like a gawky young osprey, as he hugged patrons and monitored, raptorlike, the dining room. Clad in a stark white chef’s jacket, he roamed brightly among his sleek, black-clothed wait staff. Fussing with bar glasses, conversingquietly with the host, striding purposely through the room, he had the demeanor of a man who had things handled. “I wonder why he’s not back in the kitchen?” a young woman sitting next to us muttered to her companion. “Yes,” I wondered. “Why isn’t he?” English, it turns out, knows exactly where he wants to be. And he’s had a long time to think about it. The peripatetic chef, who looks like he’s 20 but is really 38, has spent much of his career traveling the globe, cooking in far-flung locations such as Spain and Puerto Rico, and closer to home in Napa and San Francisco.
His arrival in Sacramento a few years ago was fortuitous. After cooking in New Orleans post-Hurricane Katrina, he returned to the Sacramento region, where he grew up, for a much-needed break. He met Randall Selland, and—long story short—ended up cast as the opening chef at Ella. But while he enjoyed working with Selland, he longed to open his own small, Mediterranean-inspired restaurant.
English took over the Capitol Avenue location formerly occupied by Dragonfly restaurant and opened up the dining room, creating a lighter, more expansive space. There’s a convivial bar, and a cadre of smart, professional wait staff tend efficiently to diners. To me, the restaurant’s ambiance has the flavor of both Mulvaney’s Building & Loan and Lucca Restaurant & Bar. But you’ll have to squeeze your eyes shut and imagine them all grown up, with a college degree—there is a dignified, professional edge to The Press that sets it apart.
So why is English overseeing the dining room at night, instead of flinging sauté pans in the galley? “I spend all day in the kitchen,” he explains. “At night, my role is to be up front.” His sous chef, Kevin Johnson (no, not the mayor), manages the kitchen in the evenings. Clearly, he’s on the ball as well; the artfully presented dishes shoot out of the kitchen so fast, you find yourself waggling your head like a perplexed cartoon character as they are set in front of you.
The menu has a raft of tapas (one for $4, three for $10) and appetizers. I twice ordered the compact, addictive fried meatballs with a lively garlic-yogurt sauce and had to struggle not to order them a third time. An appetizer of smoky grilled calamari, nestled in a sweet heirloom-tomato panzanella salad, was ravishing. A crispy slab of pork belly, sinfully fatty, came with grilled peaches and a sharply biting pile of arugula—a masterful balance of flavors. And a salad of Little Gem lettuce was judiciously bathed in a robust blue cheese dressing, punctuated by bright red raspberries. Pry yourself away from the small plates and try the just-made fettuccine, served puttanesca-style with chunked tomatoes, olive slivers, capers and pine nuts, or the roasty braised beef short ribs, floating on a bed of mashed potatoes.
Sadly, the desserts get short shrift at The Press. The restaurant doesn’t have a pastry chef, and English has settled on a handful of easy-to-make sweets that he and his sous chef can prepare as they go about their busy day. These include a very dense dark chocolate mousse, a pleasant, creamy flan and profiteroles. I was disappointed that the dessert lineup didn’t echo the restaurant’s thoughtful, seasonally appropriate savory menu.
However, the wine list—an appealing (and economical) jumble of Spanish, French, Italian and California products—does a fine job supporting English’s earnest fare. There’s a decent red and white house wine, made at Perry Creek Winery in Fair Play, for a mere $5 a glass, and there’s even a housemade sangria and limoncello.